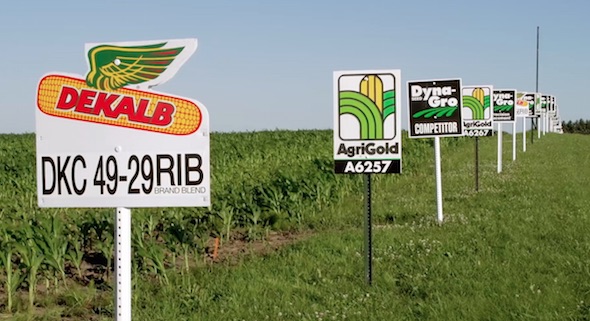 Maybe Jack wasn’t the fool son when he traded the family cow for a handful of magic beans. Seeds are the givers of life, the minute building blocks of family farms and agri-empires alike. They are powerful and often sacred objects woven into local customs and cultures around the world.

America’s own Thomas Jefferson was a famous horticulturist and seed saver who grew 330 varieties of vegetables and 170 varieties of fruit. Among his illustrious titles was that of patent examiner, basing his decisions on laws he himself had written. Items deliberately excluded from patents included plants and animals, placing public interest over private gain.

Throughout human existence, seed diversity has been a constant, including drought-resistant strains, or those able to withstand floods or wide temperature swings. For countries plagued by war and poverty, this can mean the difference between life and death.

“The Irish potato famine is a clear and elementary example of what happens when you rely on too little diversity—[you get a] mass refugee situation, many of them fleeing to the U.S.,” Jon Betz tells Truthdig. He and co-director Taggart Siegel are the filmmaking team of “Seed: The Untold Story,” a documentary that premieres on PBS’s Independent Lens on April 17, and streams online beginning April 18. “In the 1970s,” Betz says, “there was a massive corn crop blight that essentially obliterated the U.S. corn crop. The Department of Agriculture said we were sitting around, fat, dumb and happy, and then the disease hit. The Academy of Science came to the conclusion that the U.S. [crops are] impressively uniform, genetically, and impressively vulnerable. So it’s sort of a clarion call to maintain this diversity, at least in seed banks and across the fabric of our farming.”

Companies like Monsanto disrupted age-old farming methods by introducing seeds that produced greater yields at higher costs. Farmers were not allowed to purchase the seeds, and instead entered into lease agreements that prevented them from stockpiling or selling them. Over time, native seed supplies have become depleted and independent farmers entirely reliant on agri-business conglomerates.

Purchased by Bayer last year for $66 billion, Monsanto joins Syngenta, Dow AgroSciences and DuPont Pioneer in owning 80 percent of the U.S. corn market and 90 percent of soybean crops. Together, these four companies control over half of the global seed supply. A monopoly on something so vital should sound alarms. But in Washington, lawmakers on both sides of the aisle, greased by $10 million in campaign contributions, have refrained from passing regulations.

Some of them take their lead from the White House, where one of President Trump’s picks for secretary of agriculture is Ted McKinney, a 20-year veteran of Dow AgroSciences. President Obama appointed former Monsanto executive Michael Taylor to the FDA in 2010, and Hillary Clinton’s Rose Law Firm was counsel to the company. Mickey Kantor, who served as secretary of commerce under Bill Clinton, was a Monsanto board member. These are just few of over a dozen politicos with ties to the company in the past 20 years.

The tip of the GMO spear is the Hawaiian island of Kauai where Dow, Syngenta, DuPont, BASF and Monsanto have test fields used to develop pesticide-resistant, ”Roundup Ready” crops. The chemicals used in these fields remain a trade secret, but a test of the soil in Kauai showed that it has a higher concentration than all but four states in the nation (Florida, Indiana, North Carolina, Louisiana) among those with the highest level of seven EPA-designated “restricted use” toxins associated with pesticides.

In 2013, the Kauai County Council passed Bill 2491, requiring agri-businesses to disclose test chemicals, but Mayor Bernard Carvalho Jr. vetoed it. The council overrode the veto, but the bill has been tied up in a lawsuit brought by industry leaders. “They spray six out of seven days a week next to little towns and schools,” Siegel says, reflecting on the legal battle over 2491. “The chemical companies ended up winning.”

If U.S. lawmakers won’t act, some in the international community are beginning to challenge the industry. In 2013, activists from over 400 cities worldwide took part in protests against GMOs, and last October, a tribunal at The Hague in the Netherlands convened to hold Monsanto accountable for “human rights violations, for crimes against humanity, and for ecocide.” The judges will deliver their verdict April 18.

In March, a United Nations report claimed an estimated 200,000 people die each year as result of exposure to agricultural chemicals. It expressed concerns about agri-businesses’ exorbitant lobbying efforts (over $70 million since 1998), as well as its unethical marketing tactics, saying the “excessive use of pesticides are very dangerous to human health, to the environment, and it is misleading to claim they are vital to ensuring food security.”

One way to fight back is with labeling that makes clear to consumers they are eating genetically modified food. But in the waning days of his presidency, Obama approved a law known as the DARK Act (Denying Americans the Right to Know), because it preempts existing state labeling laws and prevents similar legislation in the future. Out of 64 countries, the U.S. and Canada are the only ones in the developed world without label laws, even though polls show 93 percent of Americans support them.

Some place their hope in seed banks. For the first time ever, the massive Svalbard Global Seed Vault in Norway, holding millions of varieties from every corner of the planet, was tapped to feed people in Aleppo. “If you had some major warfare event happen, it would not be hard to have a drone take out a seed bank and really jeopardize a global population,” Betz says, recalling how the seed bank in Bagdad, containing ancient species specific to that region, was wiped out during the 2003 “Shock and Awe” campaign. “You need redundancy. Google has tons of redundancy in our data. We don’t have close to that level of redundancy for our seed supply.”

To remedy the situation, important work is being done on the grassroots level—local seed libraries are beginning to spring up where growers can borrow seeds, plant, harvest and return new seeds in the spring. Farmers markets have proliferated in most cities and towns, giving consumers greater choices and supporting non-GMO farms.

The movie’s Joe Simcox travels to the Kalahari Desert in southern Africa to scout out potential crops for places like Phoenix and parts of New Mexico, where annual temperatures keep rising. A giant among seed savers, Bill McDorman left his job as director of Native Seeds/SEARCH, the preeminent southwest seed bank, to co-found the Rocky Mountain Seed Alliance where he has opened a seed school to educate others on the value and threats facing something so vital that is often taken for granted.

“Seed banks would have no seeds to save if not for thousands of farmers growing and saving them each year. If we eliminate that, we’re relegating seed saving only to the elite,” Betz says. “If there’s anything we’ve learned in the past 10 years, it’s the more we relegate things to the elite, the more fragile our system is, whether it’s the financial system or the farming system.”