Seeds Of Labor War Are Fertilized By The NLRB

Inherent in the ridiculous human condition is the necessity that we continually relearn lessons of the past, the hard way. Such is the case today. Guess what happens when the government and power structure forsake labor peace? Labor war.

Yesterday, the National Labor Relations Board—the governmental body charged with protecting workers’ rights—ruled that “Employers don’t violate federal labor law by misclassifying their workers as independent contractors instead of employees.” Which is to say, they ruled that breaking law is not a violation of labor law. This is only the most recent and most absurd manifestation of what the NLRB has become under the Trump administration: a body charged not with protecting the rights of workers and unions, but with systematically dismantling the labor laws that protect workers and unions.

That is not an exaggeration. This Republican-controlled NLRB, chaired by a career anti-union lawyer, sees its task as tearing down as many rules that help unions as possible, and putting in place as many rules that hurt unions and workers as possible. That’s it. That’s all there is to it. They have made it easier for employers to kick unions out of their workplaces; they have gone after the rule that might allow fast food employees to bargain collectively; they want to roll back the rule that allows grad students to unionize; they even want to eliminate the right to use balloon rats. They want to turn back time on labor law. The only thing that unions can do is try to wait until the next election and hope that this NLRB gets kicked out. Everyone, on all sides, knows that there is no fairness to be had in the meantime.

There is no mystery as to why this is happening. It is happening simply because moneyed interests are playing power politics. The Trump administrations works for business interests and against workers; they currently sit in the seat that controls the NLRB; therefore they use their time trying to inflict the maximum amount of damage on organized labor, because they imagine this will help them keep down labor costs and increase profits. This is the entire calculation.

There is no thought of operating the NLRB honestly, and trying to rule on cases based on the fairest interpretation of laws and precedents. That is a fairy tale, and if you believe that this government operates like that, they will laugh heartily at you behind your back. But even if you understand power politics, and cutthroat capitalism, and robotic profit-seeking with no regard for humanity, there is still an argument to be made not to treat organized labor like shit. That argument stems from wisdom, and history. Two things the Trump administration has not demonstrated much interest in.

The history of organized labor in America is bloody. It goes back more than a century. It’s full of strife. Millions of workers on strike in a year, the most dire forms of persecution, industries brought to a standstill, private armies of strikebreakers, broken heads, murders, lynchings, oppression. Over a period of many decades, what developed was very tense sort of compromise. There never stopped being pro-labor radicals, and there never stopped being pro-business radicals, but what developed for millions of unionized workers and their employers—particularly during the period from WW2 until the 1980s, the very period that conservatives today hearken back to as a golden age—was a sort of grand bargain in which prosperity was shared widely, in exchange for labor peace. Employees would agree not to strike during the length of their contracts, and in exchange, companies shared the proceeds of their labor much more fairly, providing them with the sort of lifestyles that quite literally built the American middle class. That was the deal. The very, very short version of labor history in America goes: utter oppression, then labor wars, then labor peace in exchange for shared prosperity. Up until the Reagan era, at which time right wing politicians and business interests decided to start dismantling that grand bargain in earnest. The war on organized labor resumed. And with it, economic inequality again began climbing. And now it is just as high as it was before the years of labor peace. And the dismantling of the overarching agreement between business and workers continues.

More enlightened countries—including the European countries with the world’s highest standards of living—have, in essence, arrived at the conclusion that there will be organized labor, and it will be granted power, and it will operate in concert with business and government, and prosperity will be shared by all. Alas, this is not the American version of capitalism. The American version of capitalism is: class war that is being won by capital. Moneyed interests in America do not want shared prosperity. They want everything for themselves. This is the road they have been pushing us down for decades. They found the bargain for labor peace to be too expensive for their tastes. So they tore it up. 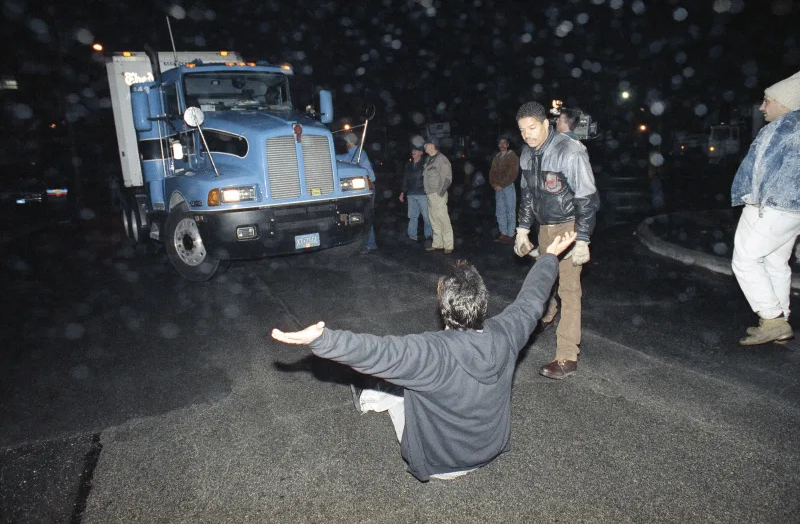 And here we are. It is nice to imagine that we live in a world where we can come together as working people and fight for our rights on a fair playing field, and the government will enforce fair laws to protect us should they need to. But that is not the reality. The reality is that the bosses have bought the umpires, and they’ve rewritten the rules, and all of the above are now set against you, the regular working person. That’s the state of play today. There’s no use deceiving yourself, or pretending that things are better than they are. Being ruthlessly realistic is the first step towards making things better.

The things that we were given in exchange for labor peace—workplace rights, wages that kept up with productivity, a fairer piece of the pie—have been taken away. We are asked now for labor peace in exchange for nothing. That’s not a very fair bargain. Why did the labor wars of a century ago happen in the first place? Because it was the only way. There was no fair outlet enshrined in law to deal with the issues, so the issues were taken to the streets. That’s nothing more than flowing water finding a path. Even the Gilded Age plutocrats came to realize that peace is better than war, and that shared prosperity is, all things considered, a cheaper proposition than the alternative. Today, moneyed interests and the politicians they own have forgotten that, or forsaken it by choice. Unions, and working people, and you and me are losing, and every avenue for legitimate redress of our grievances is being cut off, as part of a very deliberate strategy.

Guess what happens when you forsake labor peace, in order to get richer? You force the alternative. And everyone, everyone, has to get more hardcore. Think about that on Labor Day. The government is not coming to save us. There’s only us.