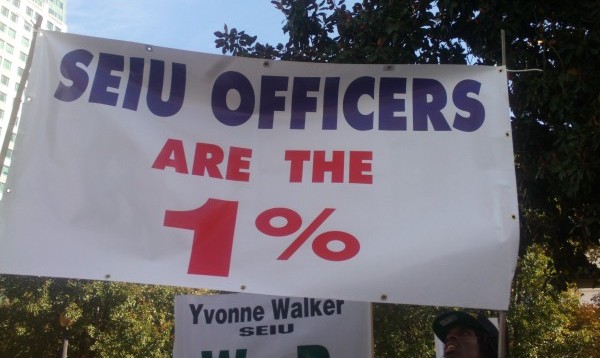 Here’s the latest news — including a new article in the Wall Street Journal — about Dave Regan’s ongoing attempt to cut a sweetheart “partnership” deal with the California Hospital Association (CHA).

During recent days, SEIU-UHW’s Regan has been in active discussions with the CHA, headed by CEO Duane Dauner, about a possible partnership deal. According to the WSJ and Tasty’s sources, the following are some of the specifics under discussion:Hospital CEOs would allow Regan to unionize 50,000 California hospital workers, without any employer opposition, in exchange for Regan’s agreement to force the workers into cheap, pre-negotiated contracts with low wages and benefits along with a lengthy ban on strikes.Furthermore, Regan has agreed to sweeten the bosses’ pot by depositing $40 million of SEIU-UHW members’ dues money into an “advocacy fund” that the CEOs would use to promote a California ballot initiative to boost taxpayer-funded Medicaid payments to hospitals by billions of dollars a year.Regan’s goal, of course, is to cement SEIU-UHW’s role as nothing less than the boss’s union. Here’s how Regan describes it to the WSJ:Dave Regan, president of the SEIU’s United Healthcare Workers West,… said Friday that the union has been talking with the hospital association for more than two years to… “create a totally different paradigm for the way unions and employers deal with each other.”If implemented, Regan’s cheap, pre-negotiated contracts for the 50,000 workers would sharply undercut the standards of already-unionized workers — including SEIU-UHW’s own members — and would accelerate the downward spiral of concessionary bargaining that Regan launched after the Purple Palace seized control of SEIU-UHW in 2009.Since parachuting into the Golden State, Regan has slashed health benefits and eliminated the defined-benefit pensions for tens of thousands of workers atDignity Health, the Daughters of Charity Health System, and other companies. At Kaiser Permanente, Regan has slashed the retiree health benefits for 43,000 SEIU-UHW members and has reportedly signed a secret side letter to eliminate workers’ pensions and cut their health benefits.If Regan succeeds in banning 50,000 newly organized workers from striking, he’ll handcuff them into cheap contracts that’ll cut the legs out from underneath from already-unionized workers. Only an idiot — or someone who’s completely sold out to the CEOs — would commit such a blunder.Here’s the full article from the Wall Street JournalWall Street Journal

By MELANIE TROTTMAN and CHRIS MAHERThe nation’s biggest health-care union and the California hospital industry are in talks on a deal that could allow the union to boost its ranks by thousands with the cooperation of management, according to documents reviewed by The Wall Street Journal.As part of the continuing negotiations, the Service Employees International Union and the California Hospital Association also would jointly support a ballot initiative to increase Medicaid payments to hospitals by as much as $6 billion a year, the documents show.The latest talks came after the SEIU threatened late last year to push ballot measures far less palatable to hospitals ?including capping executive pay and limiting how much hospitals could charge consumers. Under a union proposal made to the association last week, the labor giant would withdraw support for those initiatives in exchange for hospitals providing SEIU access to employees during an organizing drive of tens of thousands of workers, the documents show.The SEIU has been trying to negotiate an agreement for several years in which California hospitals agree to cooperate in part with an organization drive. So-called neutrality agreements are a common tactic in labor. In many such agreements, employers allow access to employees and stand aside during organizing. In turn, unions halt negative public campaigns or back political issues favored by employers.Business groups say the deals violate labor laws, which prohibit employers from giving a “thing of value” to a union, and courts have been divided on the issue. The U.S. Supreme Court recently heard a challenge to the legality of such deals but dismissed it in December.The 1.9 million-member SEIU is one of the few unions to increase its ranks amid years of declining union membership nationwide. The SEIU represents about 90,000 of California’s 400,000 hospital workers, in about a quarter of the state’s 430 hospitals, according to the union.The documents reviewed by the Journal show that on April 25, the SEIU’s United Healthcare Workers West local in California proposed a three-year deal that would give the union access to as many as 60,000 nonunion employees. The union also proposed a $100 million joint “advocacy fund” with the hospital association that would be used in part to support a 2016 ballot initiative. The measure would direct the state to cover what the hospital association says are shortfalls in payments to hospitals from Medi-Cal, the state Medicaid system.In a counteroffer authorized by the hospital association board on April 28, the industry offered a five-year deal providing access to as many as 50,000 workers and offered to pay $60 million to the advocacy fund. The union would contribute $40 million under that proposal.Jan Emerson-Shea, a spokeswoman for the hospital association, said the documents generally outlined what has been discussed but declined to comment on specifics. She said talks were likely to continue through the weekend.“SEIU is looking for some kind of access to nonunion workers,” she said. “As of today, the hospitals’ ability to provide the scale that SEIU is seeking—we’re not there.”The hospital association said California hospitals lose nearly $6 billion a year treating Medi-Cal patients.Dave Regan, president of the SEIU’s United Healthcare Workers West, which says it has 150,000 health-care workers as members, said Friday that the union has been talking with the hospital association for more than two years to find strategies to reduce health-care costs, improve the state’s Medicaid system and “create a totally different paradigm for the way unions and employers deal with each other.”“We have been exchanging proposals,” he said Friday. “We continue in discussions and we expect to continue talking today and perhaps over the weekend,” he added.Mr. Regan said finding a smoother-than-typical path to union organizing is part of the union’s agenda, though he said the union isn’t seeking a deal that would forbid the association from “respectfully” suggesting to workers that they shouldn’t join the union. “We’re not going to disparage each other,” he said. “We never said to the hospitals that you can’t give your point of view, and they’ve never said to us that they’re beyond criticism.” Mr. Regan said the agreement being sought is something other than a so-called “neutrality” deal.“We’re talking about working together on a scale that is unprecedented for unions and employers,” he said.