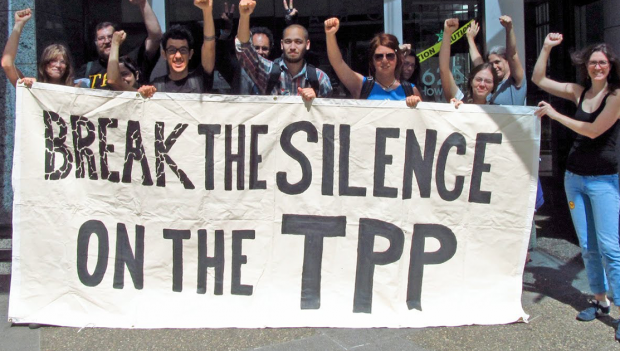 Sessions Reads the TPP and Exposes Its Contents, Other Elected Officials Should Do the Same

Senator Jeff Sessions (R-AL) is one of the few members of Congress who has taken the time to jump through the hoops and read the Trans-Pacific Partnership (TPP). But, he has gone a step farther than other members – he told members of Congress what he read. He told the truth about what the TPP says and why Congress should oppose it in a five page letter to his colleagues.

Sessions’ action flies in the face of the threats made by the US Trade Representative to prosecute elected officials who tell people what is in the trade agreement. Others should follow his example and get out the truth about the TPP.

The debate in the Senate begins on Tuesday, May 19. This is an opportunity for Senators to tell their colleagues the truth about what is in the TPP.  Sessions’ “Dear Colleague” letter was leaked and reported in Breitbart.  Senators from both parties may want to take a similar approach. Even better, during the debate on the Senate floor there will be an opportunity for amendments that expose problems with the TPP. Senators can tell their colleagues and, through C-SPAN, their constituents the truth about what is in the TPP.

How Senator Sessions Exposed the Truth about TPP

“’Congress has the responsibility to ensure that any international trade agreement entered into by the United States must serve the national interest, not merely the interests of those crafting the proposal in secret,’ Sessions’ team writes in a document that lays out the top five concerns with the Obama trade deal. ‘It must improve the quality of life, the earnings, and the per-capita wealth of everyday working Americans. The sustained long-term loss of middle class jobs and incomes should compel all lawmakers to apply added scrutiny to a ‘fast-track’ procedure wherein Congress would yield its legislative powers and allow the White House to implement one of largest global financial agreements in our history—comprising at least 12 nations and nearly 40 percent of the world’s GDP.’ . . .

“The Sessions document then goes point-by-point for five full pages through the TPA trade deal, laying out why it wouldn’t help Americans—rather, it would likely hurt American workers—and why the deal doesn’t in fact provide Congress with more power over trade despite talking points from the Obama trade deal’s proponents . . .”

The second article in Breitbart, “Only Two Republicans Admit They Have Actually Read Secret Obama Trade Deal – Both Unsupportive” reports on a survey they did of Senate Republicans where they asked three questions: (1) Have you read the TPP, specifically the ‘living agreement’ in the trade deal that allows the deal to be changed and countries added without congressional review? (2) Does the Senator agree with Sen. Sessions’ call to make the TPP available to the public? And, (3) Will the Senator vote for fast track Trade Promotion Authority (TPA) if the TPP hasn’t been stripped of the ‘living agreement’ section that would allow countries to amend the deal without Congressional approval, and to even add countries (like China, if they wanted to) to the deal without Congressional approval?

Breitbart reports that one additional Senator, James Lankford (R-OK) was scheduled to read the TPP on Friday, May 16.  Interestingly, the Oklahoma legislature recently passed a resolution urging their federal representatives to vote against fast track trade authority.

While the US Trade Representative has threatened members of Congress with criminal prosecution for telling others what is in the TPP, they have made no threat to Senator Sessions. No doubt if they did so, fast track and the TPP would be dead because the years of work by the Obama administration to move this forward in secret would be over, and as the first trade representative in the Obama administration, Ambassador Ron Kirk, told the media “if the American people knew what was in this agreement it would never become law.”

The Truth About Trade is Needed Right Now

We are in the critical phase of debate about the Trans-Pacific Partnership and other rigged corporate trade agreements.  While Speaker of the House, John Boehner (R-OH) has promised to publish all bills before they are voted on, he has not even read the TPP and definitely has not required it be made public.  While the fast track bill can be read, the TPP is different; elected officials have limited access to it and they are not allowed to discuss what they read.  So, the Congress is tying its hands on the TPP and other deals, without knowing what is in them and thereby shirking their constitutional responsibility under the Commerce Clause which directs Congress “To regulate Commerce with foreign Nations.”

Now, it becomes even more important because President Obama has repeatedly chided members of Congress for being inaccurate about what is in the TPP, even comparing Senator Elizabeth Warren (D-MA) to Sarah Palin talking about death panels.  He makes the claim that Congress does not know what it is talking about while keeping the agreement secret and difficult for elected officials and their staff to read. On top of that Obama and his administration consistently put out false and misleading statements about the agreement.  One wonders, and I hope the media begins to ask him, whether President Obama has read the agreement? As Rep. Louise Slaughter (D-NY) said in response: “We know exactly what we’re talking about. My concern is that he does not understand what’s in it.”

Obama criticized Warren for claiming that the TPP would undermine federal regulation of banks. If the language of the TPP were released we could see if he is accurate. But, after their argument on this issue, Canadian Finance Minister, Joe Oliver, bolstered Warren’s position by claiming that banking regulation that requires banks to invest with only their own money violates NAFTA.

The president has claimed that his deals are the most progressive trade agreements ever and fix the problems of NAFTA “by making labor and environmental provisions actually enforceable.” Yet, a leak of the environmental chapter actually shows the opposite – there is no environmental enforcement and the protections are weaker than agreements during the George W. Bush era.

The president also makes the claim that “no trade agreement is going to force us to change our laws.” This is an outrageous claim because all previous trade agreements have required the US to harmonize its laws with the agreement.  How can they not? The TPP, according to leaks, changes laws around patents and trademarks. How can the TPP say one thing about intellectual property and US law say another? They must be harmonized. Elected officials who have read the text can explain differences between US law and the TPP – what laws will have to change? For example will popular laws favoring buying American products survive the TPP? The Finance Committee refused to approve an amendment that would protect Buy America.

Certainly President Obama knows that his Organizing For America is being completely misleading when in an email: “argued that the term ‘fast track’ for TPA was a misnomer because TPA would have to go through Congress like any other bill.” OFA and Obama know the debate is not whether fast track has to go through Congress in the normal fashion but whether trade agreements will be fast tracked.  Why would the president and OFA be so obviously misleading? Are they desperate?

Ralph Nader has suggested that President Obama debate Senator Warren on the TPP. This would be one way to get to the truth, hear both sides debate in public so we can all decide for ourselves whether this is an agreement that should be fast tracked through Congress outside of the traditional congressional process. But a president that has worked for his entire tenure in office to keep the TPP and other rigged agreements out of the public dialogue will certainly not take up this suggestion.

Congress Is In Position to Expose the TPP

Now, at this key moment in the debate, members of Congress who have taken the time to view the TPP are in a position to get out the truth.

The debate in the Senate with its open amendment process is an opportunity to tell the truth about all the issues in the TPP so there can finally be a public debate about trade agreements that will impact every aspect of our lives.

In the House, Republicans should be sharing the comments of Senator Sessions for a solid Republican critique of fast track for the TPP and other agreements. Democrats should be highlighting key senate amendments to their caucus to highlight shortcomings.  And those who have read the TPP should share what they learned in order to strengthen opposition to fast track in the face of what will be a massive Obama effort to change their minds.

Those who oppose the TPP have the tools needed to win this debate, stop fast track and stop the TPP and other rigged agreements. If we succeed, we will have the opportunity to rethink global trade in light of two decades of experience with a failed model. It will be an opportunity to develop trade so that it protects the planet and raises the standard of living for people around the world. To achieve that opportunity, the first task is to expose the truth of what is before us.