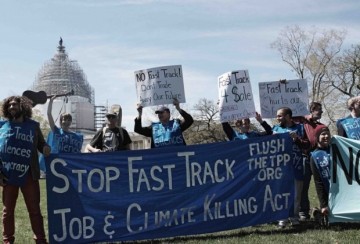 Note: There was a major victory for the movement against the Trans Pacific Partnership and other rigged corporate trade agreements today in the US Senate. Advocates for fast track trade authority fell well short of the votes needed to move to debate fast track on the senate floor, with a 52-45 vote, with 60 needed to pass. This victory is the result of well-coordinated work by the broad movement against fast track. Across the board each part of the movement of movements did its job, energized its base and flooded the senate with phone calls. The movement has always seen the senate as the weaker of the two chambers so any victory, even a procedural one like this, shows the effectiveness of all of our work. Rather than President Obama and the pro-free trade congressional advocates gaining momentum they suffered a defeat that will make it even more difficult to win future votes, especially in the US House of Representatives.

The House is unlikely to move forward. All indications are that a majority in the House oppose fast track and with the senate vote today, that majority is likely to be solidified and perhaps expanded. House leadership is unlikely to bring the bill to the Floor unless they have majority support.

This is an important victory in our more than three year campaign to stop the TPP, but our work is not finished, we need to build on this victory and finish the task. Congratulations to everyone who participated.

Senate Democrats on Tuesday delivered a stinging blow to President Obama’s trade agenda by voting to prevent the chamber from picking up fast-track legislation.

A motion to cut off a filibuster and proceed to the trade bill fell short of a 60-vote hurdle. Sen. Tom Carper (Del.) was the only Democrat to back it.

Fast-track is a top legislative priority for the White House, but it has run into significant Senate opposition that has been led by Sen. Elizabeth Warren (D-Mass.).

It faces even more opposition from Democrats in the House, and the surprise Senate failure will raise doubts about whether the legislation will make its way through Congress.

Labor unions and other left-leaning groups have declared war on the fast-track bill, which they argue has shipped jobs overseas. The Senate is generally a more pro-trade body than the House, and it has been easier to move trade agreements through the upper chamber.

The standoff Tuesday focused on procedure, though there is significant opposition to fast-track itself in the Democratic conference.

Senate Democrats demanded that Senate Majority Leader Mitch McConnell (R-Ky.) combine the fast-track bill with three other pieces of trade legislation, including a customs bill that would address currency manipulation.

The opposition included Sen. Ron Wyden (D-Ore.) and other pro-trade Democrats who back the fast-track bill.

“The group is concerned about the lack of a commitment to trade enforcement, which is specifically the customs bill,” Wyden told reporters in explaining his opposition.

McConnell has offered to bring to the floor a package combining fast-track, which is also known as Trade Promotion Authority, and Trade Adjustment Assistance, which helps workers displaced by foreign competition.

But McConnell has refused to combine those bills with the customs and enforcement act, which includes language cracking down on currency manipulation, and a package of trade preferences for sub-Saharan Africa.

“Until there is a path to get all four bills passed … we will, certainly most of us, have to vote no,” Wyden said.

The White House downplayed the defeat, with press secretary Josh Earnest describing it as a “procedural snafu.”

“It is not unprecedented for the U.S. Senate to encounter procedural snafus,” he said.  “We’re going to continue to work through these challenges.”

Senate Finance Committee Chairman Orrin Hatch (R-Utah) and Wyden, the ranking Democrat on the panel, tried to hash out a last-minute agreement to allow the trade package to come to the floor but were unsuccessful.

Hatch said he would urge McConnell to pull the trade package from the floor if Democrats block it.

It could return in the next two weeks but Tuesday’s setback means it will be very difficult to pass trade legislation before the Memorial Day recess.