Above Photo: Andrew Burton/Getty Images. People exit the house side of the Capitol building on Oct. 16, 2013 in Washington.

ONE OF THE most controversial proposals put forward by Sen. Bernie Sanders during the 2016 presidential campaign was a pledge to make tuition free at public colleges and universities. Critics from both parties howled that the pie-in-the-sky idea would bankrupt the country. Where, after all, would the money come from?

Those concerns were brushed aside Monday night, as the Senate overwhelmingly approved an $80 billion annual increase in military spending, enough to have fully satisfied Sanders’s campaign promise. Instead, the Senate handed President Donald Trump far more than the $54 billion he asked for. The lavish spending package gives Trump a major legislative victory, allowing him to boast about fulfilling his promise of a “great rebuilding of the armed services.”

The bill would set the U.S.’s annual military budget at around $700 billion, putting it within range of matching the spending level at the height of the wars in Afghanistan and Iraq.

To put that in further perspective: If the package becomes law, U.S. military spending would exceed the total spending of its next 10 rivals put together, going off of 2016 military spending estimates from the Stockholm International Peace Research Institute. 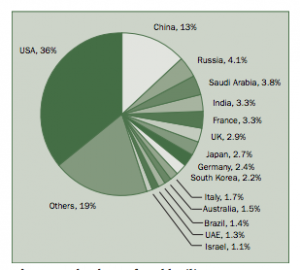 The share of world military expenditure of the 15 countries with the highest spending in 2016. (Credit, SIPRI)

Or with $80 billion a year, you could make public colleges and universities in the U.S. tuition-free. In fact, Sanders’s proposal was only estimated to cost the federal government $47 billion per year.

If the additional military spending over the next 10 years instead went to pay off student debt, it could come close to wiping it out entirely.

But proposals like that are written off as nonstarters, even by Democrats. In her new book, Hillary Clinton compares Sanders’s idea to him nonsensically saying “America should get a pony.” And while concerns about the cost of ponies abound, few Democrats are raising similar concerns about military spending, even when it is meant for a commander-in-chief they consider reckless and unstable.

The Senate voted 89-8, with three senators not voting, to approve the military money. Spendthrift Sanders joined only four other Democratic senators to vote against the bill: Kirsten Gillibrand of New York, Patrick Leahy of Vermont, and Jeff Merkley and Ron Wyden from Oregon. Republicans Bob Corker of Tennessee, Rand Paul of Kentucky, and Mike Lee of Utah also voted against it.

When Trump submitted a budget proposal in March, which cut social spending dramatically to fund a $54 billion increase in defense spending, Democrats criticized it as a nonstarter. Senate Minority Leader Chuck Schumer said he “emphatically opposed” the blueprint, and House Minority Leader Nancy Pelosi said the budget “throws billions of dollars at defense while ransacking” health and education funding.

Before the bill becomes law, it is has to be reconciled with the version the House already passed, which contains a similar $77 billion spending increase. It is likely to become law by the end of the year.