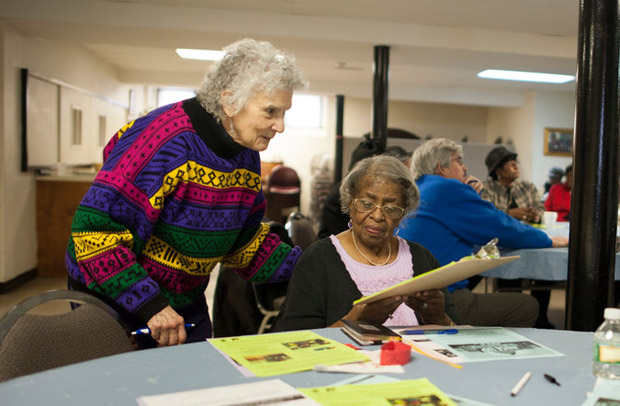 Before Boston police detained Ann A. Stewart last August, she had a clean record. But she vows not to wait long, certainly not another 89 years, to become a repeat offender.

Ms. Stewart, 89, a retired hospital employee, was arrested while chanting slogans with a few co-conspirators from inside an imitation jail cell to protest the doubling of the local paratransit fare to $4. Protest organizers erected the fake prison in the middle of the city’s busy Stuart Street to symbolize the fare increase’s effect on disabled riders on fixed incomes, and to block traffic. Ms. Stewart’s arresting officer — “a very nice young man,” she recalled — did not place her in handcuffs and let her keep her cane.

Ms. Stewart, who does not use paratransit herself, treasures the memory of her approximately two hours in custody. “It means a lot to me,” she said. “I’m very strong in my belief about certain things a senior should be able to do.”

Not long after the August protest (which was part of a longer campaign), the Massachusetts Bay Transportation Authority rolled back the paratransit fare by one dollar — evidence, in Ms. Stewart’s opinion, that older adults must aggressively fight for their rights.

Ann A. Stewart, 89: “I’m very strong in my belief about certain things a senior should be able to do.” Credit Mylan Cannon/The New York Times

In Europe, older protesters often make noise. In 2012, throngs of Greek pensioners marched in Athens to oppose austerity measures. Last October, a raucous crowd estimated at 10,000 rallied in front of the Irish Parliament to denounce medical benefit cuts for people over 65.

For now, the senior rights movement in America remains relatively muted. Perhaps as Tom Hayden, the 1960s activist, suggested, the “price of some success is that the voluntary activist groups can feel less needed.” Could older Americans just be complacent? Maybe demonstrating in the streets is best left to the young? Or perhaps, as one experienced activist argued, unfavorable media coverage of events like Occupy Wall Street gives protesting a bad name.

Whatever the reasons, several social scientists say deteriorating conditions for retirees and older Americans in general — intensifying fear about retirement security, age discrimination, increasing poverty among the elderly and new threats to cut programs for seniors — could be the impetus for what some are calling a “silver revolution.”

“Now would be the time for senior rights movements to mobilize once again,” Andrea Louise Campbell, author of “How Policies Make Citizens: Senior Citizen Activism and the American Welfare State,” suggested in an email. Ms. Campbell pointed to recent proposals by politicians to trim Social Security benefits and convert Medicare into a voucher program as actions meriting a response.

“If there’s a direct threat to Social Security or Medicare, that’s when you do see people mobilizing,” said Jill B. Quadagno, a professor of sociology at Florida State University who studies social gerontology. Ms. Quadagno recounted that in 1964, roughly 14,000 protesters, predominantly retirees, marched outside the Democratic National Convention in Atlantic City, N.J. The National Council of Senior Citizens, backed by the A.F.L.-C.I.O., staged the show of force to prod politicians to support President Lyndon B. Johnson’s proposal for Medicare, which was enacted the next year. Later that decade and in the 1970s, advocates for older adults battled to expand Social Security, winning, among other policy changes, automatic cost-of-living adjustments.

In 1970, Maggie Kuhn founded the Gray Panthers to combat age discrimination and establish an intergenerational coalition for social justice. Her longtime employer, the United Presbyterian Church, had forced Ms. Kuhn to retire at 65. In 1986, after sustained pressure from the Gray Panthers and other advocates, President Ronald W. Reagan, then 75, joined with the 73-year-old speaker of the House, Thomas P. O’Neill Jr., to abolish the mandatory retirement age. Ms. Kuhn, who traded barbs with Johnny Carson on “The Tonight Show,” became a pop culture figure; at the height of the Gray Panthers’ power in the early 1980s, the organization had roughly 60,000 financial contributors.

The Gray Panthers’ influence ebbed in the mid-1980s and eroded further after Ms. Kuhn’s death in 1995, which “drained the social movement of its energy,” Vincent Roscigno, a professor of sociology at Ohio State University, said in an email. Writing in Z Magazine, Eric Laursen analyzed the Gray Panthers as “victims of their own success,” in that they achieved many of their early initiatives.

The well-funded, 37-million-member American Association of Retired Persons (later renamed AARP), founded in 1958, also emerged as a front-line advocate for senior citizens, but the organization performs its advocacy work through more traditional lobbying efforts, not street protests. While the AARP pushes “important ideas that are important for older people,” said Eric R. Kingson, a professor of social work at Syracuse University who studies aging, “they’re not the Gray Panthers.”

The Gray Panthers organization now has roughly 15,000 members and a diminished public profile. Sally Brown, the group’s current executive director, blames the flagging troop strength on a general lack of activism in America and a “corporatized” media that “demonized” social movements like Occupy Wall Street. “The activism then just gets squelched and doesn’t lead to the change that people see, so that’s disempowering to people, and they disengage,” said Ms. Brown.

“I wish Maggie were here,” said Mr. Kingson. But even without a charismatic general, he predicted the senior rights movement would charge forward. “We’re not France. When they tried to raise the retirement age, people went to the barricades,” he said. “But if we are pushed far enough as a people, there will be a reaction. Many people are right on edge, maintaining their standard of living as retirees. I think they are scared.”

Data supports Mr. Kingson’s premise. The Center for Retirement Research at Boston College reported in 2013 that more than half of working-age households faced a deteriorating standard of living in retirement. A Pew Research Center survey published in 2012 found that the percentage of people ages 55 to 64 who doubt that they will have enough to live on during retirement rose to 39 percent in 2012 from 26 percent in 2009. And the number of seniors experiencing hunger rose 200 percent between 2001 and 2011, according to a report by the Meals on Wheels Research Foundation.

Pervasive biases against older employees should radicalize seniors across the political spectrum, said Mr. Roscigno, an expert on workplace discrimination. “We live in a society consumed and obsessed by freshness and youth,” said Mr. Roscigno. “This can and does culminate in discrimination in hiring, in firing and in general harassment.”

When aging workers lose their jobs, he noted, they find it far more difficult than younger colleagues to find re-employment. The number of age discrimination cases filed with the Equal Employment Opportunity Commission increased by more than 50 percent from 1999 to 2013.

Images of aging picketers carrying canes and protest signs are potent weapons in the advocacy arsenal, said Mr. Hayden. “We live very much now in a protest era that concentrates on the visual entirely, so, yes, the elderly in the front ranks holding the right placards does make a difference to political consultants,” he said.

But getting arrested during a protest can take a toll on elderly activists. “It’s always uncomfortable when you have steel on your soft tissues,” said Alfred Klinger, an 87-year-old retired physician who was handcuffed during a protest in Chicago in 2011 over threatened cuts to social service programs.

Mr. Hayden, 74, who as one of the “Chicago Eight” was indicted on federal charges of incitement to riot after street protests at the Democratic National Convention in 1968, is admittedly skittish about attending demonstrations these days.

“The fact that I had heart surgery 12 years ago is a contributing factor,” he acknowledged. “I don’t really want to be pepper-sprayed if I can avoid it. It wouldn’t bother me if it was 1968.”

Manning the barricades, Mr. Hayden said, might be a younger person’s mission. But he added: “If you hear of any new movements for climate protection or women’s rights or anything else led by 80-year-olds, let me know. Sign me up.”