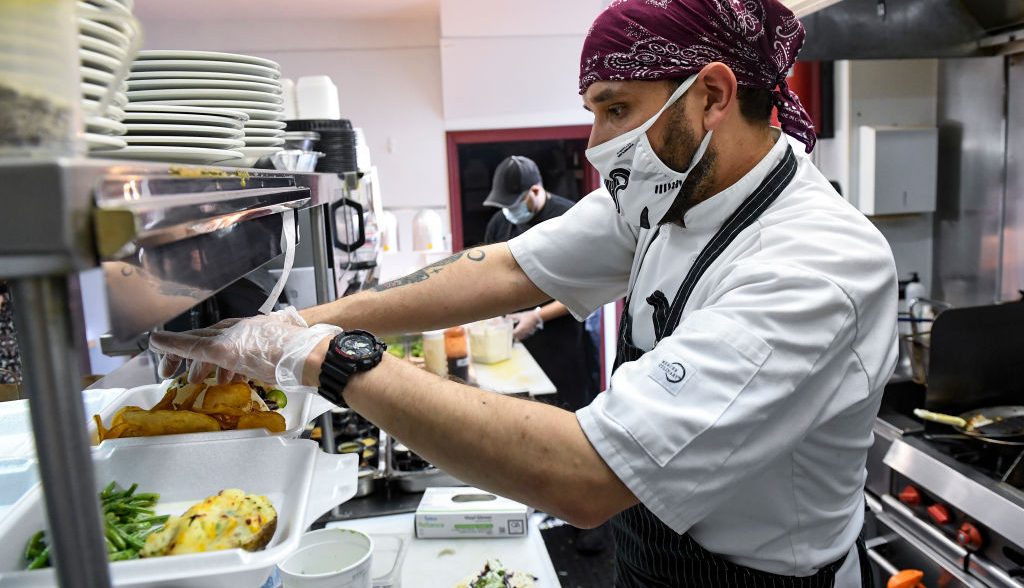 Above photo: A line cook prepares an order for curbside pickup at a restaurant in West Lawn, Pennsylvania during the pandemic. Ben Hasty / MediaNews Group / Reading Eagle via Getty Images.

Restaurant and bar owners whining about the difficulty of finding workers to toil for low wages and no benefits never seem to consider the possibility of raising those wages and benefits to try to attract such workers.

But they’re also ignoring something more basic: the coronavirus pandemic wiped out an enormous swath of the restaurant workforce.

Business owners around the country are offering up a lament: “no one wants to work.” A McDonalds franchise said they had to close because no one wants to work; North Carolina congressman David Rouzer claimed that a too-generous welfare state has turned us all lazy as he circulated photos of a shuttered fast-food restaurant supposedly closed “due to NO STAFF.”

Most of these complaints seem to be coming from franchised restaurants. Why? Well, it’s not complicated. Service workers didn’t decide one day to stop working — rather huge numbers of them cannot work anymore. Because they’ve died of coronavirus.

Line cooks are especially at risk because of notoriously bad ventilation systems in restaurant kitchens and preparation areas. Anyone who has ever worked a back-of-the-house job knows that it’s hot, smelly, and crowded back there, all of which indicate poor indoor air quality. The Center for Disease Control and Prevention and Environmental Protection Agency recommended increasing indoor ventilation to fight the virus, but such upgrades are costly and time consuming. There is no data available on how many restaurants chose not to upgrade their ventilation systems, but given how miserly franchise owners are with everything else, one could guess that many, if not most, made no upgrades at all.

Restaurants are often intentionally short staffed, making it difficult to take time off, so sick workers likely still came to work (and infected others in the process). Bars and restaurants are COVID-19 hotspots, and service workers and customers alike get sick after prolonged restaurant exposure. The difference is that many of those customers have health insurance and other safeguards to prevent them from dying of the illness; 69 percent of restaurants, on the other hand, offer their employees no health benefits at all.

When coronavirus is spread at restaurants, and restaurant workers make little money and rarely earn health benefits, it’s no wonder morbidity rates are so much higher for food service workers. But rather than collectively grieve the deaths of tens of thousands of the people who serve us and keep us fed, and keep such tragedies in mind when considering the state of the food-service industry labor market today, business owners and their political lackeys call these workers “lazy.”

There are, of course, also living, breathing people who have decided they do not want to risk their lives for $7.25 per hour and no health benefits. That is a perfectly rational decision for the homo economicus to make. Given how dangerous restaurant work is during a viral pandemic, if restaurant owners really wanted more workers, they would offer living wages, health benefits, and adequate personal protective equipment. But all the wage increases in the world won’t bring back the dead.

There aren’t enough people working in the service industry, and service bosses have somehow turned that into our problem, into something we ought to be ashamed of. We shouldn’t fall for it. Profits accumulate because of labor — without workers to exploit, the owning class can’t get richer. Capitalists cannot exploit the labor of the dead, so when large swathes of the working class die, they turn their ire on the living.

This is a barbaric response to mass tragedy. Workers across the country and the globe are dead or grieving. We shouldn’t risk further tragedies for a paltry minimum wage.

Sandy Barnard is a member of Chicago Democratic Socialists of America who has worked in housing and progressive policy.