Setting The Record Straight On Green Resources’ Project In Uganda

With the recent publication of Evicted for Carbon Credits: Norway, Sweden, and Finland Displace Ugandan Farmers for Carbon Trading, the Oakland Institute has brought forward irrefutable evidence that villagers were forcibly evicted to make way for the Norwegian company, Green Resources’ tree plantation in Kachung, Uganda. The establishment of the plantation on land previously used by subsistence farmers has precipitated an on-going food security crisis that the company, its financers, and the Ugandan government have failed to address.

Following the publication of Evicted for Carbon Credits, the Oakland Institute received responses from Green Resources and its financers, Norfund, Finnfund, and the Swedish Energy Agency (SEA), and a letter from the certification agency, Forest Stewardship Council (FSC). Here we respond to them jointly to set the record straight. 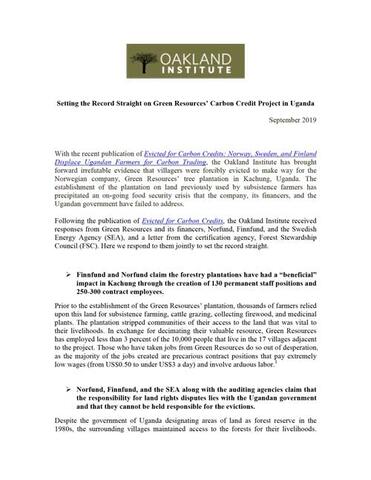