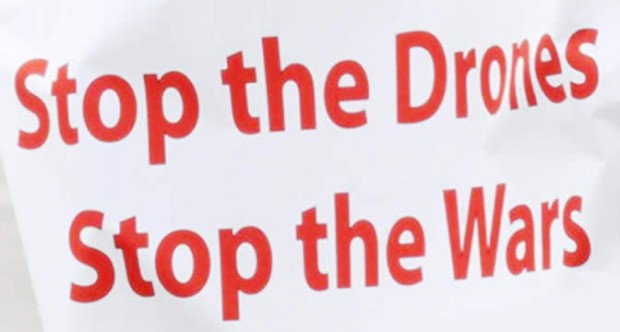 Order of Protection Delivered for the Children of the World

The eight delivered a People’s War Crimes Indictment to the Hancock chain of command by affixing it to the fence after being refused by the base personnel.  Also delivered was an Order of Protection on behalf of the children of the world who are subject to U.S. drone surveillance and attack.

The group blocked the entrance to the base and took up positions for vigil.  Brian Hynes, NYC Catholic Worker, was allowed to vigil on the side of the main entrance, usually prohibited.  Seven from the group – from Vermont, Maryland, New York City, and Ithaca were arrested.

Three of the arrested are grandmothers.  On July 10th, 2014, drone activist and grandmother, Mary Anne Grady Flores, was sentenced to one year in jail for violation of the same Order of Protection, taken out on behalf of the Colonel of the base.  She is currently out on $5,000 bail pending appeal. A higher court has found the order to be invalid.

The Upstate Coalition to Ground the Drones and End the Wars www.upstatedroneaction.org is made up of antiwar organizations and formed around resistance to the MQ-9 Reaper Drone program at Hancock Field Air Force Base.