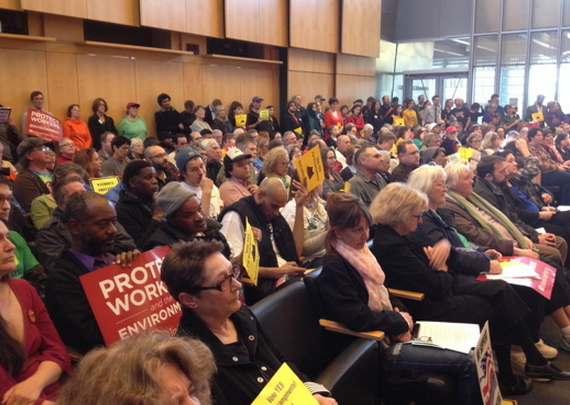 Note: Margaret Flowers and I attended the city council vote in Seattle where one of the largest west coast port cities voted against fast track for the Trans-Pacific Partnership and other rigged trade agreements. We arrived 30 minutes early so we could get on the first-come, first-served list to testify but by the time we arrived there was more than 100 people in front of us and the list was full even though public comment was extended from 20 minutes to an hour. It turns out our voices were not needed. It was great to see a city where a movement-of-movements has developed around the adverse economic, social and environmental impacts of rigged corporate trade deals modeled after NAFTA. There were well informed statements made by a wide array of Seattle citizens ranging in age from a young teenager to the Raging Grannies and including perspectives from labor, environmentalists, economic justice advocates and others. The city council members also made excellent statements, some reflected in the article below.

This became a high stakes city council resolution for the Obama administration because they worked hard to avoid it the result. Reportedly President Obama called the mayor to urge him to derail the vote, but he had no control over the council. High ranking officials from the US Trade Representative called some of the council members as did all the big business interests in Seattle, a city where the port is responsible for billions in economic activity, tens of thousands of jobs and where a million containers are handled annually. Washington is the most trade dependent state in the country so for its largest port city to reject fast track is significant.

Despite all of this pressure, the council voted unanimously to oppose fast track for the TPP and express their support for free trade, not rigged trade like the TPP. This turned a minor city resolution to an example of the lack of political support for fast track for the TPP and other deals further undermining the efforts of President Obama, US Trade Rep. Michael Froman and congressional leaders.

What can we learn from this week’s vote in the Seattle City Council, to oppose Fast Track trade legislation and express concerns about the Trans-Pacific Partnership(TPP)?

[A video of the entire meeting is here. To move around in the video, pull the little white circle with your cursor and watch the dimmed time stamp just above the circle.

Listen — please read this through, then go back and look at the video]

Seattle City Council meeting, March 30, 2015
Lesson 1: It’s not, “For trade” or “Against trade”.
Seattle is arguably the most trade-dependent city, in the country’s most trade dependent state. The City Council is in favor of trade (video at the 1:09:30 mark). Everyone I know is in favor of trade. The problems are in the other 24 chapters in the TPP.

We’re also in favor of banks, education, health care, transportation and energy. We have perfectly good public dialogue about these other issues. In the same way, it should be natural to talk about good trade policies and bad trade policies.

Lesson 2: The more you look at our failed trade policy, the less you like it.
Seattle City Council members started this debate as informed citizens, but not trade experts. They quickly came up the learning curve over several weeks. They heard plenty from corporate advocates, who abound in the Seattle area. They also heard (start at the 6:30 mark in the video) from workers, environmentalists, social justice groups, and the faith community. While they were studying this issue, WikiLeaks released a new draft of the notorious investment chapter of the TPP.

Council members looked at dozens of letters written by members of Congress to our negotiators. A letter from Jay Inslee, Governor of the most trade dependent state in the union, opposing a key provision in TPP was so persuasive it was cited twice in the resolution.

Seeing multiple examples of half-truths gives our negotiators a credibility problem. An elected official puts his or her credibility at risk by aligning with someone who tells diplomatic half-truths.

Just prior to the vote, one Council member summarized her personal experience, (1:21:10 in the video) concluding, “what I saw [in USTR statements] were a lot of conclusionary statements without a lot of support.”

Lesson 3: 20 years after NAFTA, the results are in — trickle-down fails again.

But imports went up even more. If I’m happy about exports, why shouldn’t I worry about imports? Every dollar spent on imports is a dollar of economic activity that didnot take place in America. We consumed that item, but it was produced elsewhere. The USTR has turned this “exports-only” talking point into a serious credibility problem. [Caution: this link to a serious credibility problem includes the potentially offensive word “Bullshit.”]

Since NAFTA, our cumulative trade deficit is over $11 trillion. Imagine that producers in the US had received $300 or $400 billion in additional orders in each of the last 20 years. They would have hired an additional 1-3 million workers to produce those items, strengthening our industrial base. Of course, we didn’t get those orders. That’s what it means to have a huge trade deficit.

Lesson 4: Public sentiment is shifting against our failed trade policy.
Another councilmember said it’s hard for him to believe the USTR’s promises of protections for workers and the environment (1:24:15). He used a turn of phrase — “[being] on the right side of history” — which mirrors a similar expression used by noted economist Joseph Stiglitz in a piece critical of TPP – “[being] on the wrong side of globalization.”

In the public comments (22:50 mark), a young organizer told the Council that she has gone door-to-door speaking to people about Fast Track and TPP. She didn’t find anyone supporting them.

Economist Paul Krugman asked the same question from a completely different perspective — why is President Obama wasting his political capital on this deal? Krugman’s analysis is purely economic. When you add in the political, social and moral issues in TPP, it only gets worse.

Lesson 5: No one understands why this deal is good for regular people.
In the video, a Council member makes this point in a simple way. The proponents of TPP are almost exclusively global companies. (1:11:10) On the other hand, every labor and environmental group is opposed.

In a committee meeting two weeks ago, a Councilmember pointed out that 600 corporate lobbyists control the TPP negotiations. They are not concerned with the interests of workers or the environment. Civil society has no influence over the provisions in TPP. What do you expect to be the outcome?

The administration’s worst argument in favor of TPP is an incomprehensible or maybe nutty claim that TPP will restrict China in some elaborate geopolitical-economic web. No one has ever been able to explain that to me. It just adds to the sense that this entire deal is really about someone else.

Lesson 6: We will need government policies to solve our most urgent problems.
President Obama and a broad spectrum of other leaders agree that the defining problems of our time are climate change and income inequality. These are bothmarket failures of historic proportions.

Policies at the federal state AND city level will be part of any solution (1:10:30). The basic function of TPP is to help global companies avoid responsibility for solving these problems, and to make sure investors get compensated for any possible loss in expected profits.

Lesson 7: This issue is not that hard to figure out.
Nine experienced, well-informed Seattle City Councilmembers took time to examine an issue of immediate importance to them and their community (1:11:55). They worked together within the Council toward a common-sense conclusion — when you find yourself at the bottom of a deep hole, you should stop digging. (I know this is not the best metaphor to use in Seattle.)

Fast Track hands the President and our negotiators a power-shovel to keep digging a deeper hole with bad trade policies that affect everyone.