SF Protesters Say No To “Techsploitation,” Block Buses With Scooters

Above Photo: By Abraham Rodriguez

Protesting what they called the “techsploitation” of the city’s public space, about 50 protesters descended on a eight large white commuter buses Thursday morning, blocking their departure to Mountain View.

Scooters block tech buses on 24th and Valencia from Mission Local on Vimeo.

The protest was organized by housing activists in San Francisco and in solidarity with activists in San Jose and Berlin, where people are staunchly opposing a new Google campus in their neighborhood.

One banner draped over a bus reads, “Techsploitiation — from the sweatshop to the gig economy to the e-waste dump — is Toxic, Sweep Tech NOT Tents.”

(See time-stamped updates throughout the day, below.)

Fifty people blocked 14 tech buses by piling scooters in their path and lighting an orange flare at 24th and Valencia. One bus driver tried to move the scooters, but soon resigned himself to just waiting. A passerby sprayed graffiti on one of the idle buses.

The group of housing activists reject what they see as tech companies “littering the city,” while homeless encampments are swept away.

“This is a message from the community,” said Tony Robles, a community organizer focused on housing for seniors with disabilities. He says that tech companies like Bird, a scooter company, act with impunity and dump stuff in the neighborhoods without considering the needs of current residents.

People testified on a PA system about how their lives have been transformed by what they call a tech takeover. One woman said the city cut down trees to make room for the tech buses.

Organizers created a memorial for Pablo Avendano, 34, who was fatally struck by a car while working for the food-delivery app Caviar. Protesters see his death as an indictment of the “gig economy.”

“It’s all interconnected,” said Kelley Cutler with the Coalition on Homelessness. Cutler says the perception is that San Francisco and the Mission are a playground, providing the grounds for new tech companies to fuel displacement and homelessness. 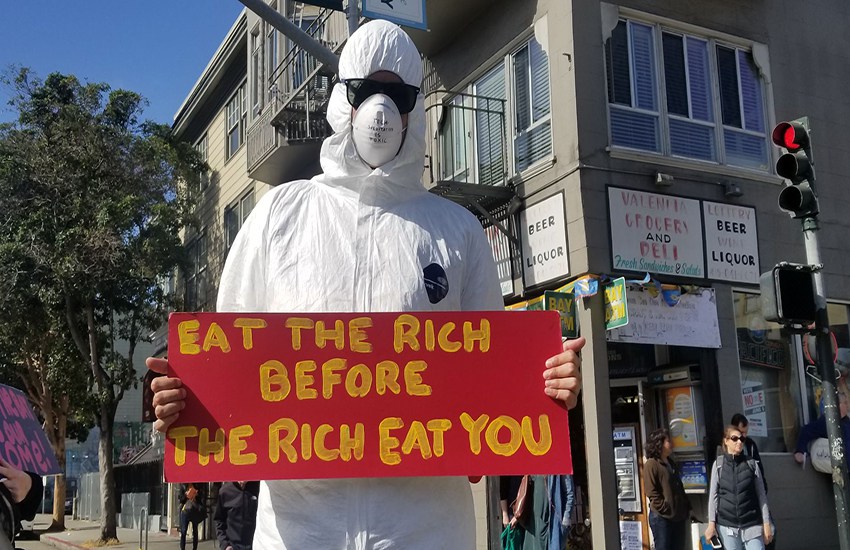 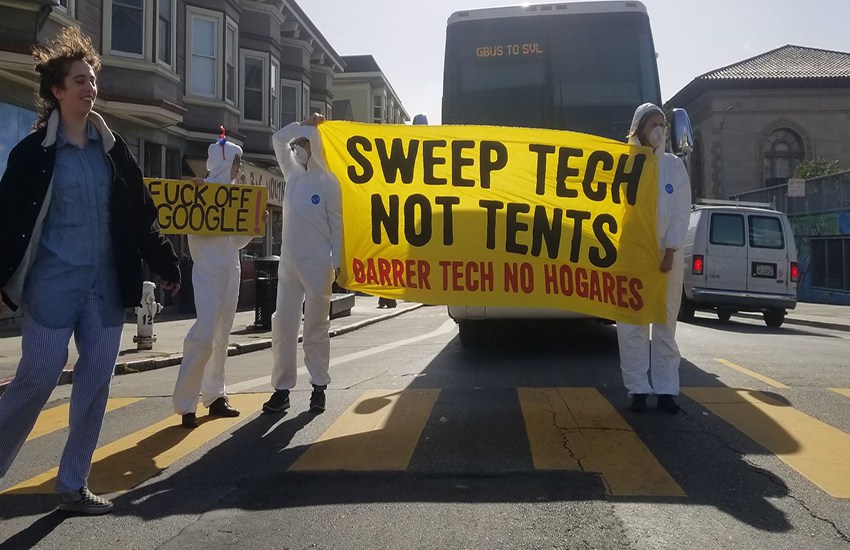 After an hour of blocking traffic and tech buses, protesters announced the protest was over. They picked up the scooters and carried them over the to sidewalk, clearing the way for the tech buses to drive off to their next destination. A short action. Point made. 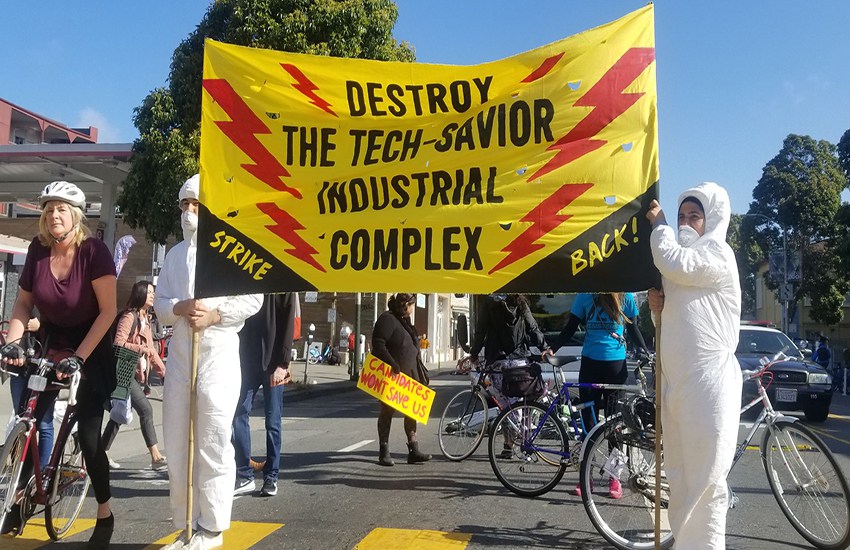 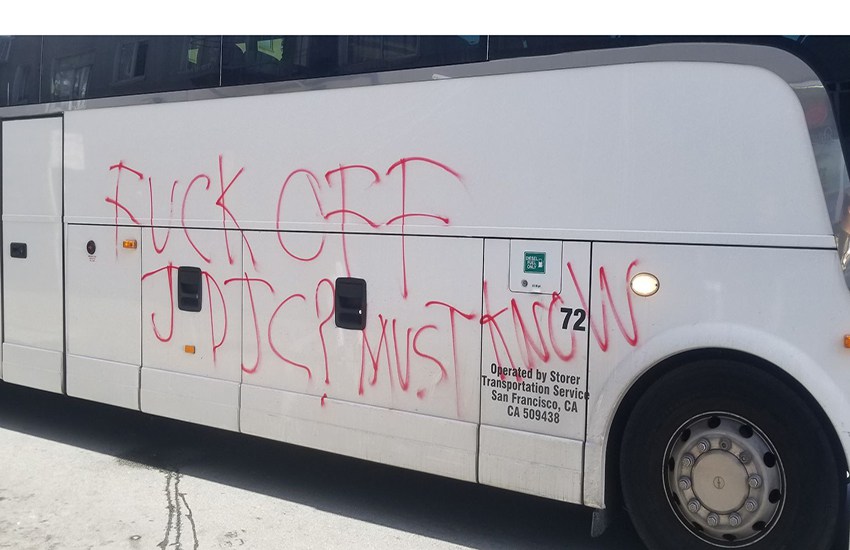 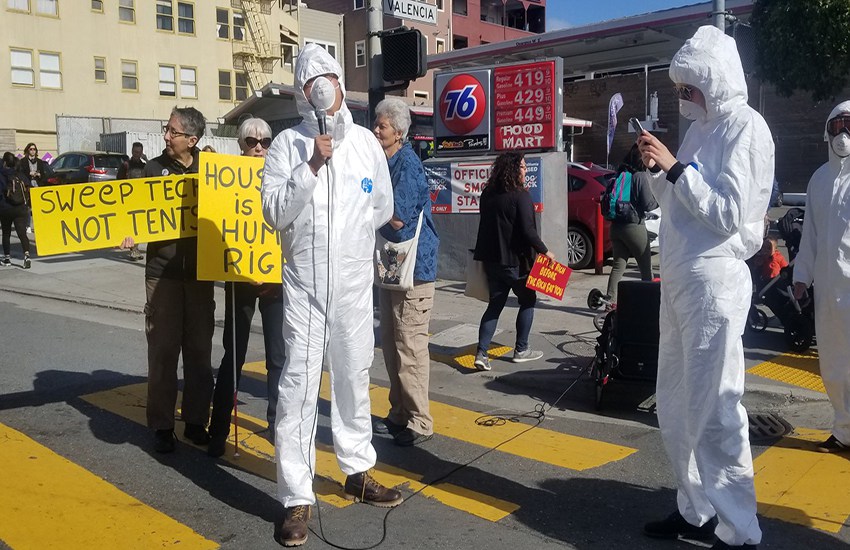 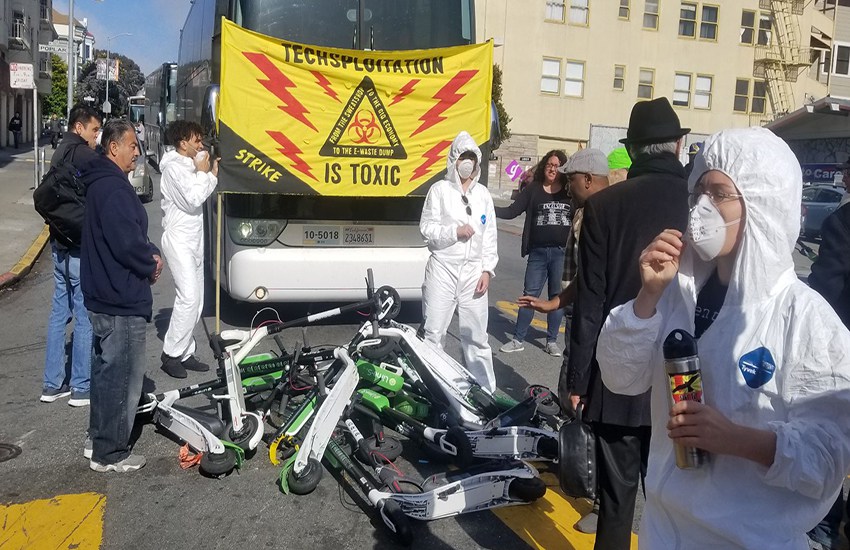