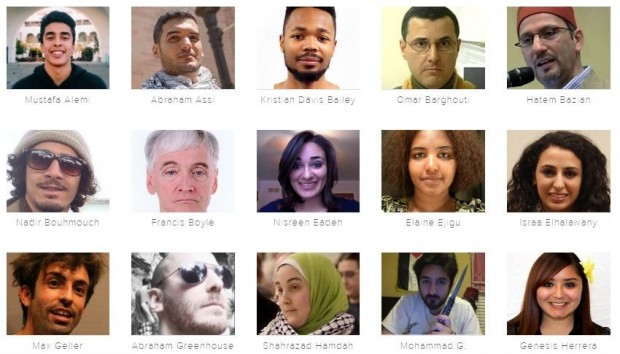 A new website is publicizing the identities of pro-Palestinian student activists to prevent them from getting jobs after they graduate from college. But the website is keeping its own backers’ identity a secret.

“It is your duty to ensure that today’s radicals are not tomorrow’s employees,” a female narrator intones in a slick video posted to the website’s YouTube account.

Called Canary Mission, the site has posted profiles of dozens of students and recent graduates, alongside those of well-known activists like Omar Barghouti, founder of the Boycott, Divestment and Sanctions movement. Some of the students are active in Students for Justice in Palestine; others were involved in recent pro-BDS resolutions at campuses in California. Many of them have relatively thin activist résumés.

“The focus on young people and students is an effort to try to tell people that there will be a price for you taking a political position,” said Ali Abunimah, founder of the pro-Palestinian website The Electronic Intifada. “It’s an effort to punish and deter people from standing up for what they believe.”

Daniel Pipes, president of the Middle East Forum, defended the tactic as a way of forcing people to understand the seriousness of their political stands.

“Factually documenting who one’s adversaries are and making this information available is a perfectly legitimate undertaking,” Pipes wrote in an email. “Collecting information on students has particular value because it signals them that attacking Israel is serious business, not some inconsequential game, and that their actions can damage both Israel and their future careers.”

The Web domain is registered in a way that hides its ownership. Though the site says that Canary Mission “is a non-profit organization,” no group called Canary Mission is currently registered with the IRS as eligible to receive tax-deductible contributions, and the website indicates no fiscal sponsor through which it can accept donations. The group’s MailChimp account identifies its ZIP code as 10458, a corner of the Bronx that includes Fordham University.

A person named Joanna responded via email to a request for comment from the group, agreeing to an interview but then not calling this reporter over two days. Joanna also did not respond to a list of questions submitted about the group.

A handful of right-wing pro-Israel groups that focus on campuses said they had no relationship with Canary Mission, including the David Horowitz Freedom Center, Pipes’s Middle East Forum, the AMCHA Initiative and StandWithUs.

When asked whether his group had supported Canary Mission, Charles Jacobs, who runs Americans for Peace and Tolerance, a far-right group that purports to expose extremism on campus, said he had no comment. Jacobs is the founder of The David Project, which, under his leadership, produced a 2004 documentary titled “Columbia Unbecoming” that depicted Columbia’s Middle East studies department as unfriendly to Jewish students.

Distributing lists of activists and their activities is not an entirely uncommon tactic in the Middle East debate, on the left or the right. A website called Masada2000, now offline, maintained what it called the “Self-Hating and/or Israel Threatening” list of Jews whose views it considered unacceptable. In early 2014, the anti-Zionist blog Mondoweiss uncovered a password-protected website maintained by StandWithUs that contained backgrounders on pro-Palestinian speakers on the campus circuit. On the left, the website for Right Web, a program backed by the Institute for Policy Studies, profiles hawkish pro-Israel groups and activists.

The individual dossiers on the Canary Mission’s site are lengthy and detailed, and include videos and photographs of the activists. In the case of some current students, the site lists their majors. There are links to Facebook pages, Twitter pages and LinkedIn profiles, and lengthy descriptions of pro-Palestinian student groups and movements to which these students have alleged links.

“I think it’s creepy and I think it’s McCarthyist,” said Max Geller, an SJP member who is profiled on the site. “This is not a badge of honor. This is scary.”

Geller said that some of what is written about him on the site is untrue, and that he has contacted an attorney.