Popular Information focuses a lot of attention on the activities of corporate PACs, even though the dollar figures involved are relatively small. Corporate PACs can contribute a maximum of $5,000 per election to a federal candidate. For a typical candidate that has a primary and general election, that’s $10,000 per cycle.

So why do we spend so much time tracking this spending?

Because corporate PACs are one of the few aspects of corporate political spending that is fully transparent. All of the money donated by corporate PACs to federal candidates is reported to the FEC. Things are a bit more complex on the state level, but it’s a similar dynamic. Most states also have fairly regular disclosure of corporate PAC donations. Some states allow corporations to donate directly to candidates but those donations still must be disclosed.

But all of this is just a fraction of the money that major corporations spend to influence the political process. Companies likely spend much more on direct and “grassroots” lobbying, which encompasses efforts to influence legislation and the federal, state, and local levels — and most of this spending is completely opaque.

For example, most major companies are members U.S. Chamber of Commerce. A company like UPS pays substantial dues to the U.S. Chamber, which then uses those funds to influence policy. The U.S. Chamber opposes a $15 minimum wage, corporate tax increases, and federal legislation to protect voting rights. How much does UPS spend to support these efforts? That is a secret. Many corporations choose not to disclose whether they even are members of the U.S. Chamber, much less how much money they contribute.

And the U.S. Chamber is just one of the thousands of ideological, industry, and issue-based groups — most organized as non-profits — that exist to influence the political process. Charles Koch and his late brother David Koch created a constellation of non-profit groups to push the country to the right. How much did Walmart donate to support the Kochs’ efforts? We don’t know.

But shareholders are engaged in an effort to create more transparency for corporate political spending. In the coming weeks, companies like Amazon, Walmart, Exxon Mobil, and United Airlines will face shareholder resolutions that call on the company to disclose its indirect political spending, including contributions to trade associations and political non-profits.

These resolutions are non-binding but can have a significant impact if they receive the support of more than 50% of shareholders. A resolution with majority support must be taken seriously because a majority of shareholders can also vote to replace the board of directors.

Another set of resolutions facing Pfizer, Home Depot, and JP Morgan ask the company to create a report describing how its political spending aligns with its corporate values.

All of these resolutions are opposed by company management. But their fate ultimately depends on large institutions like Vanguard and Blackrock, which hold an enormous volume of shares of most publicly traded companies and, therefore, play an outsized role on whether a shareholder resolution passes or fails.

On May 26, Amazon will have its annual shareholders meeting. That day, Amazon shareholders will vote on a resolution that calls on the company to prepare an annual report detailing “[p]ayments used for: (A) direct or indirect lobbying, and (B) grassroots lobbying communications  –  in each case including the amount of payment and recipient.” Indirect lobbying is defined as “lobbying conducted by trade associations or other organizations to which Amazon belongs.”

Proponents of the resolution notes that “Amazon belongs to the Business Roundtable (“BRT”) and the Chamber of Commerce (“CoC”), which have together spent over $2.0 billion on lobbying since 1998” and that the company supports “the Competitive Enterprise Institute, a controversial climate-denial organization.” Amazon, however, “does not disclose individual payments to trade associations, so-called social welfare organizations, or what portion is used for lobbying.”

The supporters of the resolution argue that “Amazon’s lack of disclosure creates serious reputational risk when its spending contradicts publicly-held company positions.” For example, “Amazon publicly supported COVID-19 efforts, but its [U.S. Chamber] dues went to directly lobby against use of the Defense Production Act for production of personal protective equipment for workers.”

Amazon’s board of directors opposes the resolution and urges shareholders to vote against it, claiming that the company already reports “comprehensively and transparently on our public policy expenditures.” The company says its “2020 U.S. Political Engagement Policy and Statement discloses the U.S.-based trade associations, coalitions, charities, and social welfare organizations to which Amazon’s Public Policy team contributed at least $10,000 in 2020.”

But Amazon’s disclosure does not disclose how much it donates to each organization or how the money is used. The report looks like this and goes on for six pages: 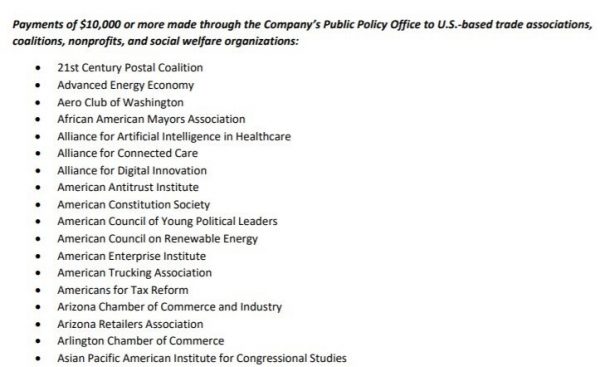 This is not meaningful disclosure. The company says it “regularly reviews the climate change positions taken by our trade associations to determine whether our memberships remain appropriate.”

On May 26, Exxon Mobil shareholders will consider a similar resolution calling on the company “to disclose all of its electoral spending, direct and indirect.” The proposal would expand Exxon Mobil’s existing disclosure to include:

Payments to trade associations that the recipient organization may use for election-related purposes,

Payments to any other tax-exempt organizations such as 501(c)(4)s that could be used for election-related purposes, and

Payments to influence the outcome of ballot measures.

Exxon Mobil opposes the resolution. The company says it “believes disclosure requirements outlined by federal and state laws are both adequate and equitable, in that they require the same level of disclosure from all participants in the political process.”

Exxon Mobil does publish a list of U.S.-based trade associations to which the company “provided $100,000 or more in support and a portion of that was reported to us as being used for lobbying.” It claims that this list “represent approximately 95 percent of the company’s annual trade association expenditures.”

But Exxon Mobil does not disclose its total spending on trade associations or how much it donates to each group. Exxon Mobil also provides no disclosure on contributions to non-profits or advocacy groups.

Shareholder resolutions calling for increased political transparency have been proposed for several years. But there is a new push to require corporations to explain how their political spending is consistent with their publicly stated values.

On May 20, for example, Home Depot’s shareholders will consider a resolution calling on the company to “publish, at least annually, a report, at reasonable expense, analyzing the congruency of political and electioneering expenditures during the preceding year against publicly stated company values and policies.” Proponents of the resolution argue that such a report “minimizes risk to the firm’s reputation and brand by addressing possible missteps in corporate electioneering and political spending that are in contrast to its stated diversity and environmental policies.”

A letter from Tara Health Foundation, which submitted the resolution, argues that “Home Depot’s political spending patterns are undermining the good work and the high aspirations of [its] corporate responsibility initiatives.” The foundation, citing Popular Information’s reporting, notes that Home Depot was under pressure “to distance itself from bills in the Georgia state legislature seeking to restrict voting access” after it was revealed that “Home Depot gave to $30,000 in contributions to 14 sponsors of these bills” since 2018.

Home Depot’s board opposes the resolution, saying that the report would not “provide shareholders with any more beneficial information than is already available.” Pfizer and JP Morgan face shareholder resolutions calling for the creation of similar reports.

The two companies that make or break most shareholder resolutions

BlackRock and Vanguard are the two largest fund managers in the world. As of 2020, both manage at least $16 trillion in assets –– that’s equivalent to more than “three-fifths of the U.S. GDP.” Owning shares in the majority of public companies, these companies wield tremendous influence over corporate behavior. A Vanguard or BlackRock vote can make or break most shareholder resolutions.

Recently, both fund managers have supported resolutions that focus on lobbying and political spending. In October 2020, BlackRock voted in favor of a proposal submitted by shareholders of Cintas that asked the company to “disclose all of its electoral spending.”

Additionally, as part of its 2021 Stewardship Expectations, BlackRock stated that it expects corporate lobbying efforts and political activities to be aligned with a company’s public statements.

We will now seek confirmation from companies, through engagement or disclosure, that their corporate political activities are consistent with their public statements on material and strategic policy issues.

Both BlackRock and Vanguard also suspended all political donations in the wake of the insurrection.

We evaluate corporate political activity shareholder proposals through a lens of financial materiality, grounding our analysis in an assessment of potential risks associated with these expenditures and how those risks could affect long-term performance….When gaps in disclosure or disconnects with longterm strategy are found, Vanguard funds may vote in favor of proposals calling for greater disclosure and oversight.