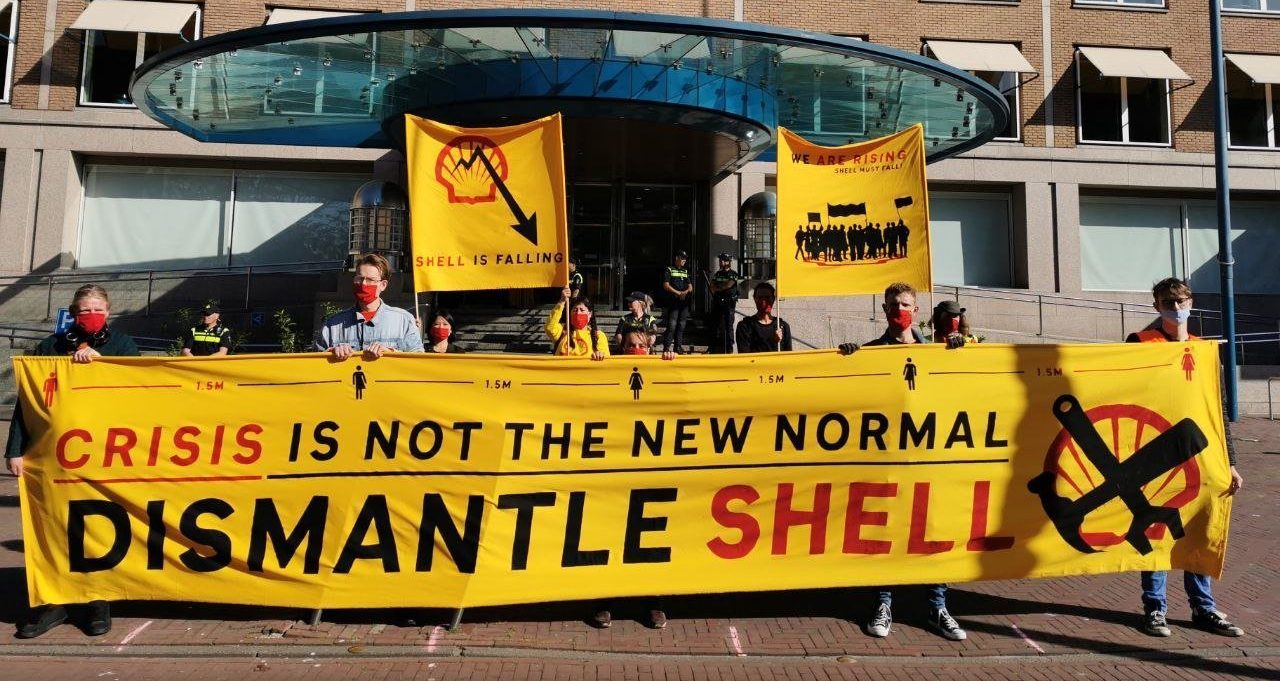 Banners, graffiti, blockades and a demo at HQ.

The Hague– After a night of autonomous decentralised actions, the group ‘Shell Must Fall!’ protests in front of the Shell Headquarters in the Hague during their annual shareholders meeting. Decentralised actions have taken place in several Dutch cities, as well as in Belgium, Czechia and Germany. The disastrous impacts of Shell’s business as usual have been spray painted on tankstations, banners have been dropped, slogans have been chalked. Right now, three petrol stations are occupied in Prague. Amongst other places, more protest will take place in Denmark and Portugal later in the day. The protestors demand public decommissioning of Shell, because the company continues to choose profit over climate, nature, and lives.

Protest in times of Covid

The municipality of the Hague declared it illegal to demonstrate with more than 30 people in front of Shell’s Headquarters. Chalk paint with messages about Shell on public streets was removed before the AGM started. Therefore, rather than one corona large protest, there are three corona-proof protests going on at the same time. The protest at the headquarters, a small demonstration to reprove the close-knit bonds between the Dutch government and Royal Dutch Shell, and a demonstration explicitly to reprimand the limitation of the right to demonstrate. At all places, people stay 1.5 metres apart and wear masks.

Because of corona Shell has invited only two Shareholders at its annual general meeting. Other years, this was one of the few places where critical shareholders and concerned stakeholders could voice their concerns about Shell’s destructive business. Journalists, scientists, and representatives of impacted communities are not welcome this time, even though the oil multinational is at a critical point.

Spokesperson Nina: ”Shell is exploiting the corona crisis to make decisions behind closed doors. Not closing the oil drilling rigs, but limiting participation under the guise of safety: everything Shell does is a sham. At shareholders’ meetings like this, money is the only priority – even if it is at the expense of integrity, people’s lives, and the climate”.

In the demonstration in the Hague, some of the victims of Shell’s disastrous policies speak out. Shell Must Fall! works with impacted communities all over the world where the resistance against Shell is ever-growing: e.g. Mozambique, Nigeria, Ireland, Groningen. Especially in the Global South, Shell has been violating human rights, all while obscuring climate science and hurtling us towards climate breakdown. Shell is one of the oldest oil companies with a history of destroying the environment and violation of human rights. A notorious example is the Niger Delta, an area totally devastated by the company’s long-term activity. In the mid-1990s, Shell was involved in judicial murders of Ken Saro Wiwa, a Nigerian activist and writer, and other members of the Ogoni Nine – leaders of the local movement against the company’s unfair practices. At the demonstration, perspectives from around the world are shared to hold Shell accountable, as well as breaking down how we can nationalise and dismantle Shell.

Actions all over Europe

Shell Must Fall is inspired by mass civil disobedience protests from Ende Geleande, and after the shareholders meeting became a broad alliance with climate justice movements all over the world. Sister organization Limity Jsmy My & Extinction Rebellion Czech Republic is occupying three petrol stations in Prague. Ende Geleande is blockading a road in Berlin. See below for more detail on actions throughout Europe. 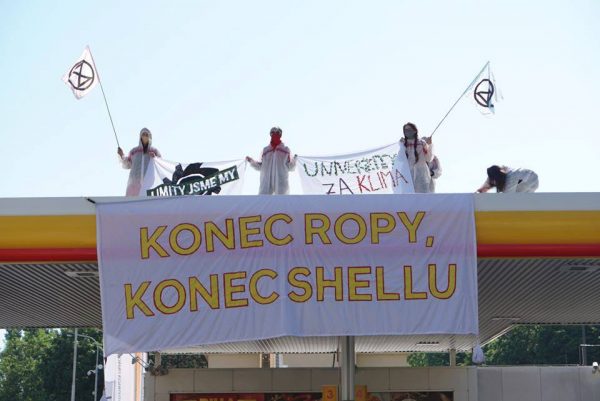 Twenty people from Czech Climate justice groups Limity Jsme My and Extinction Rebellion Czechia ended their occupation of three petrol stations this afternoon. Adéla Hrdličková from Extinction Rebellion Czechia: “Our goal is to inform the public on important decisions that are being made behind closed doors of global corporations’ meeting rooms. Shell’s activities have a long-term negative impact on the environment and people and so we call for the end of such activities and reparations of damages.” The protest took place to ask to take stakeholders, rather than shareholders in consideration when doing business. There were no arrests.

In Hamburg, there was bannerdrop at a Shell petrol station. In Berlin the local Ende Gelande fraction did a bicylce protest to call for the dismantling of Shell. In Belgium different individuals from Climaxi, Act for Cliamte Justice and Exctinction Rebellion Belgium worked together to put slogans on petrol stations that call attention to Shells ecocidal business.
Philip Blok(spokesperson Shell Must Fall): ““One year ago, not far from here, we issued the first public declaration that we will do everything in our power to make Shell fall. Because of the circumstances, we are with a small group of people here today. However, at this moment, protests are being organised in different cities, in different countries and in cyberspace. And we know that we have friends on all continents, growing in numbers and confronting fossil power wherever it manifests itself.”

Chalk actions and bannerdrops throughout the Netherlands

In Hengelo two banners were dropped with the text ‘Shell Must Fall!.’ In Groningen protesters chained gasoline pumps at four petrol stations. The province in The Netherlands suffers from earthquakes thanks to the Shell & The NAM’s gas drilling. In 2018, a mass civil disobedience protest took place there, bringing 750 climate activists from all over Europe together to show their solidarity with the injustices brought upon Groningers. Extinction Rebellion Leiden en Earth Strike painted the front of the Boerhaven Museum with chalk pain in protest. The art institutions still accepts money from the oil company, thereby giving them a better image, a practice commonly known as ‘artwashing.’ The slogans were removed from the premises within minutes. In Asmterdam, the Shell MUst Fall coalition organised a waterprotest. Personifications of Ben van Beurden and Charles Holliday sat in a boat sailing through the Amsterdam canals. Behind them, a sinking earth, in front of them cake. Several individuals dropped banners with slogans demanding climate justice from the bridge the boat passed. 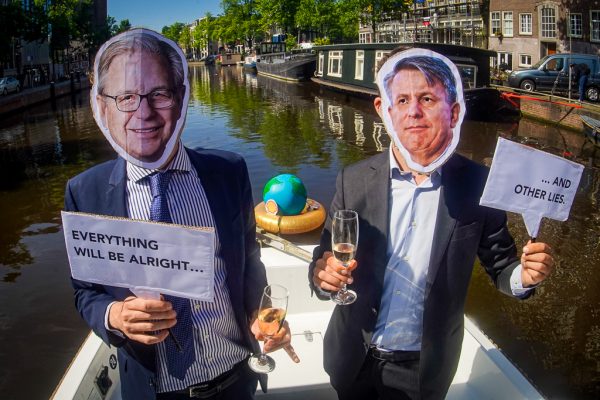 For everyone who couldn’t partake in a physical event, an online event on manif.app was organized. This action is still ongoing, and will be active until tomorrow morning. On a virtual map, people move from the Shell headquarters to different impacted communities, from Groningen to Ognoinland NIgeria, to UNist’ot’en Camp Canada en Cab Delgadop in Mozambique. This protest is organized by Climaxio, the Portuguese climate justice group that planned to travel to the Hague with three busses. BEcause of corona, many international climate justice groups changed their plans and organized solidarity actions in different ways.

Although the “city of justice” stopped sponsoring Shells childrens marketing festival Generation Discover they still did everything in their power to prevent any discomfort for Shell. The right to demonstrate was limited to thirty people, and almost every activist-resembling person got a personal police officer. Shell proclaims to respect the right to demonstrate. In February this year, Shell was brought to court for complicity in the execution of Barinem Kiobel. He was one of the Ogoni9, nine activists from Nigeria who were hanged for being critiical on the Nigerian military regime and the business of Shell. Protestors stayed 1.5 meters way from each other and wore masks, and the atmosphere was powerful and intense.