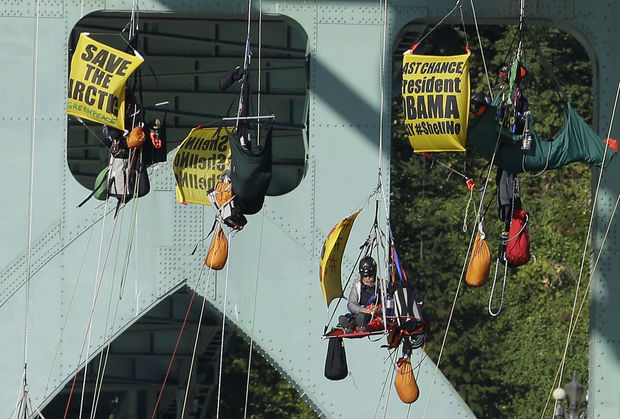 © Tim Aubry / greenpeace.org
Thirteen Greenpeace activists staged a two-day human blockade by suspending themselves from a bridge in Portland, Oregon to prevent a Shell Oil vessel from leaving for Alaskan waters. The Arctic-bound vessel got through after police intervened, arresting campaigners.

All protesters were eventually lowered into Willamette River by the Coast Guard, Oregon State Police and Portland Fire & Rescue crews and detained for alleged criminal trespassing and interfering with law enforcement, according to reports.

However, after the human blockade was removed and the icebreaker, which is central to Royal Dutch Shell’s plans for extracting oil in the Arctic, began to depart, so-called “kayaktivists” tried to engage the vessel by rowing into its path.

What an amazing group of heroes! We majorly delayed Fennica and brought worldwide attn to @Shell ‘s reckless drilling pic.twitter.com/MuVZgGIpYz

The second wave of protesters was pushed away by officers in sheriff boats and rescue crews. The vessel was able to leave the harbor around 6pm local time. “The Fennica is now safely on its way to Alaska and will join Shell’s exploration fleet in the Chukchi Sea – where the Transocean Polar Pioneer commenced initial drilling operations at approximately 5:00 tonight AKDT,” Shell said in a statement. Before lowering the dangling protesters, police asked whether they would come down voluntarily.

Another activist from a local environmentalist group, Portland Rising Tide, took matters into his own hands and locked his neck with a bike lock to the Oregon Slough Railroad Bridge. Rescuers had to cut the lock to remove him from the bridge. The protester was detained.

Greenpeace claimed the action was a success. “We found that the blockade was successful,” Greenpeace spokeswoman Mary Nicol told GGW.com. “Climate change does present a real threat to everyone globally.”

Nicole added that the goal is to bring attention to the issue and persuade President Barack Obama to reconsider giving permission to Shell to drill in the Arctic. Environmentalists fear the drilling could harm Arctic populations of whales, polar bears and walruses, or even end up in a major ecological catastrophe, given Shell’s record of oil rig incidents and reported dumping of waste.

Meanwhile, US District Court Judge Sharon Gleason has ordered Greenpeace to pay a fine of $2,500 per hour for the time Shell’s vessel was delayed.