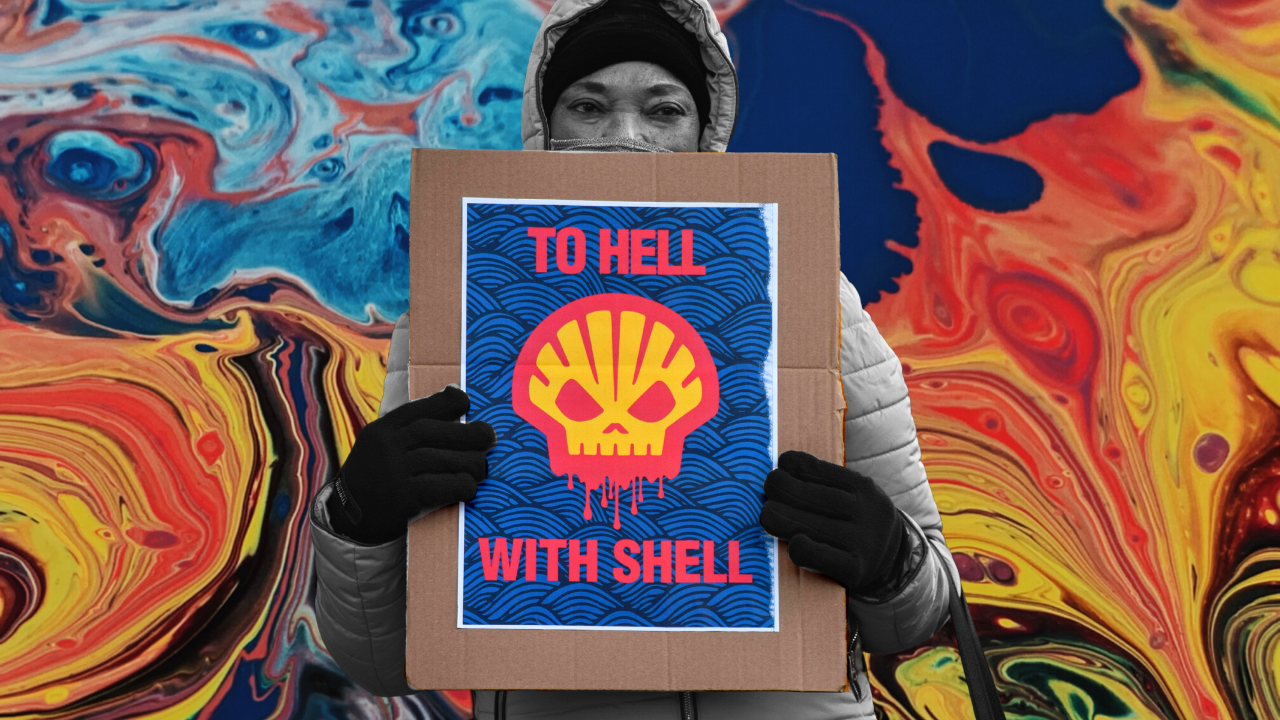 Shell Needs To Be Dismantled – Here’s How

Above Photo: Though many agree we must end fossil fuel extraction, questions remain over how to dismantle oil and gas giants. Sipa US / Alamy Stock Photo.

The company is still deeply undemocratic and destroying the environment.

It has been a turbulent year for the oil and gas giant Shell.

Last May, Dutch courts ruled that Shell must drastically reduce its carbon emissions. In October, ABP, a major shareholder, divested from the company. The following month, the firm announced plans to move its headquarters from the Hague to London and drop its iconic prefix, ‘Royal Dutch’ (the company is now just Shell plc). And, in recent weeks, it has come under fire for its mammoth 14-fold increase in quarterly profits, having made $16.3bn (£12bn) pre-tax profit in the last quarter of 2021, while gas prices surged across Europe.

Now, as Shell presents itself as a global leader in the green energy transition, it is still actively investing in new oil and gas drilling.

But that is not the company’s only problem.

For a start, Shell’s profit-maximizing business model is deeply undemocratic, benefitting top management and shareholders at the expense of communities around the world. The firm has also not reckoned with its colonial past and severe human rights violations, while its privileged access and influence over political decision-making processes are an obstacle towards building a democratic and green energy system. And, finally, its investment in ‘innovation’ is primarily dependent on gas and carbon capture, which keeps the world locked into a fossil fuel future.

While many agree that ending fossil fuel extraction is necessary, questions remain over how to dismantle oil and gas giants such as Shell. These companies will certainly not stop polluting of their own volition – so governments and civil society must take strategic action to force them to do so.

Can this be done via carbon pricing, bankruptcy, strategic litigation or nationalization? When assessing these mechanisms, it’s critical to consider how – and if – they would reckon with the corporation’s colonial legacy and safeguard labor rights to build a fairer and regenerative energy system.

On an international scale, carbon pricing is the main policy incentivizing big corporations to become carbon neutral. With this approach, greenhouse gas emissions are captured in a price, which polluting companies can either choose to pay in order to continue emitting carbon or they can reduce their emissions.

Although some of these mechanisms can yield incremental improvement, there’s no evidence that they can produce the transformational change that we need. Two and a half decades after the Kyoto Protocol established the first carbon markets, Shell is still profiting from expensive carbon offsetting and storage programs that distract from necessary emissions reductions. Together with promoting net-zero as the primary climate target, Shell has effectively delayed the implementation of more radical climate action

An energy transition powered by carbon pricing also does not break with the current profit-maximization model of such corporations, which prioritizes shareholders’ interests over people and the planet. Nor does it prevent dubious actions to secure access to energy resources, such as illegal land grabs of Indigenous territories. As such, the best-expected outcome from carbon pricing is a green capitalist Shell that might produce solar energy but thrives on the same anti-democratic and colonial practices it does today.

How About Pushing Shell Into Bankruptcy?

While Shell is not close to filing bankruptcy, and indeed is expected to make profits of £23.6bn this financial year, bold climate action by governments – in the form of cutting subsidies and closing off tax havens – and more of its big investors divesting their shares, might bring the corporation closer to collapse.

However, these initiatives carry significant risks. Economists suggest that, at this point, bankrupting Shell might be counterproductive, leading to the corporation selling its assets to other oil and gas giants instead of decommissioning its oil and gas infrastructure. Moreover, firms often exploit legislative loopholes in bankruptcy legislation to shed labor and clean-up obligations.

Anti-Shell campaigns therefore need to find ways to financially mandate the company to disburse reparations to the communities directly destroyed by extraction, prevent the corporation from selling or spinning off assets as part of a restructuring process, and guarantee an effective net-reduction in CO2 emissions.

More than 1,500 climate-related court cases have been brought worldwide, with some extraordinary victories booked against Shell in the past year.

The groundbreaking climate ruling in a case brought by Friends of the Earth Netherlands obliged Shell to drastically reduce its future carbon emissions, even though it moved its headquarters to the UK. The ruling underlined the transformative potential of strategic litigation and its ability to shift the public discourse towards matters of corporate responsibility to act on the climate crisis.

However, this process is arduous, lengthy and costly. It also remains to be seen how effective court cases brought in the Netherlands or the UK can actually be in shifting power to affected communities in the Global South.

After Shell knowingly deceived the public about the link between greenhouse gas emissions and global warming, the company’s future should be determined democratically. Yet, surprisingly, taking the corporation under public ownership is not an idea widely discussed.

Recent proposals suggest that nationalizing energy systems (taking a corporation into the ownership of a national government), could enable citizens to democratically control their livelihoods, enable a just transition for fossil fuel workers, and ensure the clean up of communities that have been on the frontlines of extraction.

However, considering that three-quarters of the world’s oil reserves are already owned by states and this has not led to a fairer and more sustainable approach to energy production, if the Bank of England were to acquire a 51% share in the now-British multinational, it would not be sufficient to guarantee a just transition. Neither would this nationalization necessarily lead to a process of redress and a reckoning with colonial pasts and extractive harms.

In fact, some experts argue that, rather than leading to distributive justice, nationalization could actually further climate colonialism by feeding into corruption and exacerbating historical inequalities. Nationalization is therefore not sufficient on its own – it needs to be coupled with democratic control and decolonization.

Ultimately, there are no silver bullets to phase out Shell. We will need a combination of strategies.

While not perfect, strategic litigation and democratic public ownership are essential to break Shell’s profit-maximization model and manage the company’s equitable decline. Shell workers can decommission fossil fuel infrastructure and leftover assets can be transformed into a fund to finance climate reparations and adaptations in the Global South. And crucially, we will need concerted domestic social movements in solidarity with affected communities globally.

Shell might believe its empire is too big to fall, but so did the absolutist monarchs at one point. So let’s continue imagining how Shell could, and eventually will, meet its end.