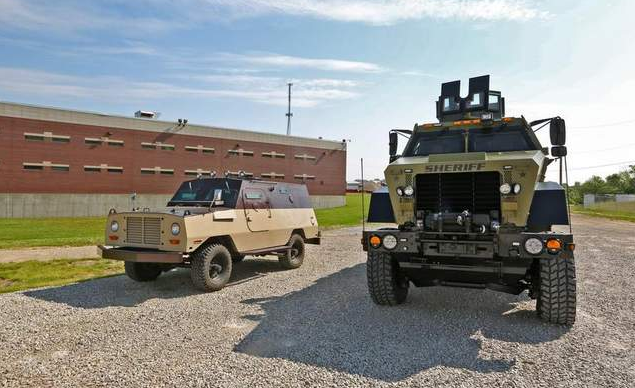 Sheriff: ‘America Has Turned Into A War Zone’

In a pole barn in Franklin, sharing space with a motorcycle and a boat, sat an imposing military vehicle designed for battlefields in Iraq or Afghanistan, not the streets of Johnson County.

It is an MRAP — a bulletproof, 60,000-pound, six-wheeled behemoth with heavy armor, a gunner’s turret and the word “SHERIFF” emblazoned on its flank — a vehicle whose acronym stands for “mine resistant, ambush protected.”

“We don’t have a lot of mines in Johnson County,” confessed sheriff Doug Cox, who acquired the vehicle. “My job is to make sure my employees go home safe.”

Johnson County is one of eight Indiana law enforcement agencies to acquire MRAPs from military surplus since 2010, according to public records obtained by The Indianapolis Star. The vehicles are among a broad array of 4,400 items — everything from coats to computers to high-powered rifles — acquired by police and sheriff departments across the state.

Even in Pulaski County, population 13,124, a more military approach to law enforcement is needed these days, Gayer suggested.

But, to some, the introduction of equipment designed for war in Fallujah, Iraq, to the streets of U.S. towns and cities raises questions about the militarization of civilian police departments. Will it make police inappropriately aggressive? Does it blur the line between civilian police and the military?

“Americans should … be concerned unless they want their main streets patrolled in ways that mirror a war zone,” wrote Rep. Hank Johnson, D-Ga., co-author of a USA Today article earlier this year. “We recognize that we’re not in Kansas anymore, but are MRAPs really needed in small-town America?”

A smorgasbord of equipment

The MRAPs were obtained from the Law Enforcement Support Office of the federal Defense Logistics Agency. Local agencies pay only the cost of delivery.

Military surplus can save departments a lot of money. In Franklin’s case, Cox estimated, it paid about $5,000 for its MRAP. The government paid $733,000 when it was new.

Morgan County Sheriff Robert Downey and Major Jerry Pickett, head of Johnson County SWAT, said if they had $300,000 to spend, they would prefer a commercial “BearCat” armored vehicle — such as what the IMPD has — instead of a military MRAP. The BearCat is smaller, lighter and faster. The MRAP can’t exceed 65 mph. But they don’t have that money. So they used military surplus.

In Johnson County, the sheriff’s department had been using a 22-year-old armored “Peacekeeper” vehicle from military surplus before it became unreliable. It’s much smaller than the MRAP and looks its age. Cox said maintenance for the MRAP will come out of the jail’s commissary fund.

“I think us having (the MRAP) in that barn is much better than the federal government leaving it rusting on a cement slab somewhere in Texas or Virginia or wherever these may be sitting,” Cox said.

Gayer, who is among the state’s most prolific applicants for military surplus items, said he checks a website every day to see what’s available. Pulaski County has obtained equipment originally worth a total of $4.9 million, including numerous trucks, a snow camouflage parka, a “ballistic blanket” capable of resisting certain kinds of ammunition and night vision sniperscopes. Gayer’s agency shares a SWAT unit with Starke County.

“We are a rural law enforcement agency and not readily served by larger agencies … to handle our emergency needs,” Gayer wrote in his application for the MRAP. “Therefore, we are building our department with surplus equipment to handle the needs of our citizens and their safety.”

In the northern Indiana town of Walkerton, population 2,247, the police department doesn’t have an MRAP, but it has obtained numerous military surplus items. That includes laptops in the police cars, cameras, clothing and office items. It also includes two Humvees, four M16 rifles and holographic sights for the rifles.

Steve Heltzel, marshal of the police department in Rome City, population 1,369, said some of his military surplus equipment has been valuable, but he’s in the process of returning the most expensive items because they don’t work or weren’t what he thought he was getting. Other officers also noted the lack of detailed descriptions and sometimes poor condition of equipment.

A nightscope, Heltzel said, “looked like what I used in Vietnam.” A gunfire simulator that Heltzel thought would be an audio system for police training, turned out to be a 150-pound device for training soldiers in tanks.

“It appears to be something you have to put explosives in,” Heltzel said.

The police department in Mooreland, population 367, has a hazardous material analyzer, originally worth $75,000, according to government records — and a soft-serve ice cream machine.

Mooreland Police Department marshal Jeff Murray said suspicious powders have been mailed to police in the county, and, “If we were able to use it once — for what we got it for — it was worth it.”

The main argument for the military equipment is officer safety. “Throughout our careers as police officers,” Walkerton police chief Matthew Schalliol said, “we never know what we’re going to encounter.”

It seems hard to refute. Who doesn’t want cops to be safe? But Peter Kraska, author of numerous studies, including “Militarizing Mayberry and Beyond: Making Sense of American Paramilitary Policing,” said it’s more complicated than that.

“The problem with that is, it’s a real slippery slope and it can become unreasonable,” said Kraska, a professor at Eastern Kentucky University’s School of Justice Studies. “A traffic stop is extremely dangerous for the police. In a democratic society, though, we wouldn’t want to see those traffic stops or even 25 percent of those traffic stops handled by a SWAT team.

“If what you mean by being cautious (to protect officers) is increasingly militarize, that doesn’t necessarily result in safe outcomes. In fact, it can escalate risky situations instead of deescalate them.”

If an agency has an MRAP, he said, it might feel it needs to use the vehicle, increasing the number of deployments by its SWAT team. That means broadening the situations an agency defines as being in need of a SWAT team.

Cox, the Johnson County Sheriff, said he will not let officers “get over-excited” about using the vehicle.

Kraska said no data exists on deployment of MRAPs by law enforcement, or outcomes. The American Civil Liberties Union announced a project last year to collect data through public records.

“We certainly understand that law enforcement has a challenging job,” said Jane Henegar, executive director of the ACLU of Indiana. “We demand that they keep us safe, and it has to be done in an atmosphere where you respect people’s rights and freedoms. That’s a hard job.”

Radley Balko, author of “The Rise of the Warrior Cop,” wrote that Department of Homeland Security grants to law enforcement have also fueled militarization, and that military contractors are marketing to police.

“A new industry appears to be emerging just to convert those grants into battle-grade gear,” Balko wrote. “That means we’ll soon have powerful private interests, funded by government grants, who will lobby for more government grants to pay for further militarization — a police industrial complex.”

The libertarian Cato Institute has been outspoken against militarization of police, pointing readers to a map and database titled “Botched Paramilitary Police Raids.”

That map has three examples from Indiana, the most recent from 2007. But other states haven’t been as fortunate.

Last month, a 19-month-old boy was burned and needed skin grafts when sheriff’s deputies in Habersham County, Ga., serving a “no-knock” warrant on drug suspects at 3 a.m., threw a flash grenade that landed in the child’s playpen. Officers believed there were no children present.

The child’s mother told an Atlanta television station that doctors had to put her son into an induced coma. Last week, state and federal officials opened investigations.

“He’s such a happy little boy, and to see him like this laying there, not moving, it’s heartbreaking,” the boy’s mother said. “We just want to hold him and we can’t.”

‘Everybody was in awe’

Neither Johnson County nor Morgan County has a written policy on when to use the MRAP. Downey, the Morgan County sheriff, said it’s a judgment call by the head of his SWAT team. Cox said he would have input, but if he’s gone, Johnson County’s SWAT leader would decide.

Morgan County’s MRAP arrived last October and has been used twice, Downey said. Last December in Owen County, Downey said, a suspect came out of a home and turned himself in without violence. The other call, in January, ended as the MRAP was on its way to Cloverdale, Ind., when officers received notification that the vehicle wasn’t needed. It’s not unusual for agencies to use their MRAPs in a different jurisdiction, if requested.

Johnson County has used its MRAP once since obtaining it in February. It was for a case late last month in Edinburgh involving a fight between two men, a stabbing and a suspect barricading himself in another home.

David Lutz, deputy chief of the Edinburgh Police Department, said he thought the case could be a homicide at the time, so he called for Johnson County’s SWAT.

Cox called the MRAP “perfect” for the situation. Without it, officers would have to “stage” raids farther from the target, moving stealthily and taking cover behind cars and trees.

Police parked the MRAP directly in front of the home. Lutz said the man was intoxicated and wouldn’t come out, so SWAT officers entered and arrested him.

Lutz fully supports using the MRAP. “Oh, yeah, anything for the safety of officers,” he said. “SWAT is after the worst of the worst. It’s what they do.”

But he also said he wasn’t expecting to see an MRAP when he called in SWAT.

“Pretty soon, here comes this massive, intimidating truck,” Lutz said. “I’m thinking, that’s almost a tank. I could not imagine what the guy inside the house would think. Can you imagine seeing that, how intimidating that would be? Everybody was in awe.”

The vehicles do get noticed.

To retrieve their MRAP, three officers from the Johnson County Sheriff flew to Houston. They had a two-hour tutorial and then drove home, according to Pickett, the SWAT team leader.

The hulking vehicle was still painted a solid desert-sand color at the time. When they stopped for fuel, Pickett said, people were extremely curious: “I think they probably thought we were military.”