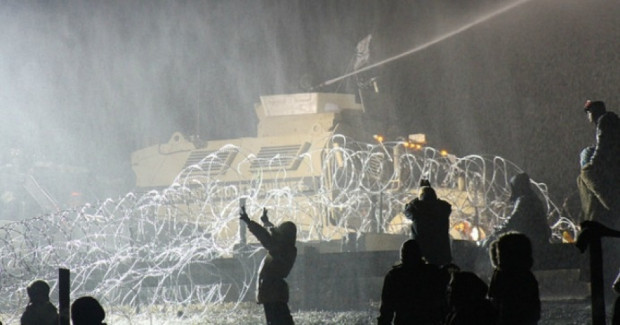 Sheriff Who Met DAPL Opponents With Force Now An Advisor

Above Photo: The Morton County Sheriff’s Department deployed a tank and sprayed peaceful protesters with a water cannon amid sub-zero temperatures on November 20, 2016. (Photo: Dark Sevier/flickr/cc)

Morton County Sheriff Kyle Kirchmeier, made infamous for leading his department in brutal confrontations with opponents of the Dakota Access Pipeline, is reportedly advising other law enforcement on how to deal with protesters.

In an interview with the Omaha World-Herald published Tuesday, Kirchmeier predicted that the next flashpoint will come in Nebraska over the pending construction of the Keystone XL (KXL) tar sands pipeline.

Throughout the months-long standoff in North Dakota, the sheriff’s office was repeatedly criticized for acting as a security force for pipeline company Energy Transfer Partners, as well as for routinely employing an excessive use of force against demonstrators. Police in riot gear attacked the water protectors with rubber bullets, water cannons, teargas grenades, and other weapons.

In addition, military vehicles such as a BearCat and MRAPs were deployed, while protesters were monitored by helicopters and identification check-points.

Yet, Kirchmeier told the World-Herald “that several other states, including South Dakota, have asked him to relay what he learned from the Standing Rock protests, and said that eventually he expects to talk with those from Nebraska,” the newspaper reported.

Among the lessons learned, according to reporter Paul Hammel, is how the county and state both “declared emergencies so they could utilize emergency funds to buy riot gear and cover the costs of officers who came from other states, including Nebraska.”

Further, “Kirchmeier said some tactical lessons were learned in confronting protesters, but he declined to share them,” Hammel wrote.

Since Trump’s State Department issued a permit last month for the portion of the pipeline that would run from tar sands fields in Alberta, Canada to existing pipelines in Steele City, Nebraska, opponents have been ramping up legal challenges and plans for non-violence resistance.

And it seems that local law enforcement is also making preparations.

Law enforcement and county officials interviewed say there have been some discussions about what might be coming, but they declined to say whether any protest-control training is underway.

Taylor Gage, a spokesman for Gov. Pete Ricketts, said that commenting on such security preparations would “jeopardize” those plans. The Nebraska State Patrol is well aware of what happened in North Dakota, patrol spokesman Mike Meyer wrote in an email, and regularly trains for “contingencies” such as protests and natural disasters.

Meyer said that recent purchases by the patrol of the sort of nonlethal devices used in crowd control—such as impact sponges and rubber-ball blast and pepper spray grenades—were not out of the ordinary, and are part of the agency’s regular equipment purchases.

Activist Jane Kleeb, who founded the organization Bold Nebraska that helped lead the original movement against KXL under former President Barack Obama, told Hammel that she is hopeful the project will not come to fruition, either because of the pending lawsuits or because it still needs approval from the Nebraskan government.

Otherwise, she said, “I think you’ll see creative, nonviolent civil disobedience if it comes to that…We’re obviously going to do everything we can to stand with landowners and the Ponca Tribe to protect their land and their legacy.”