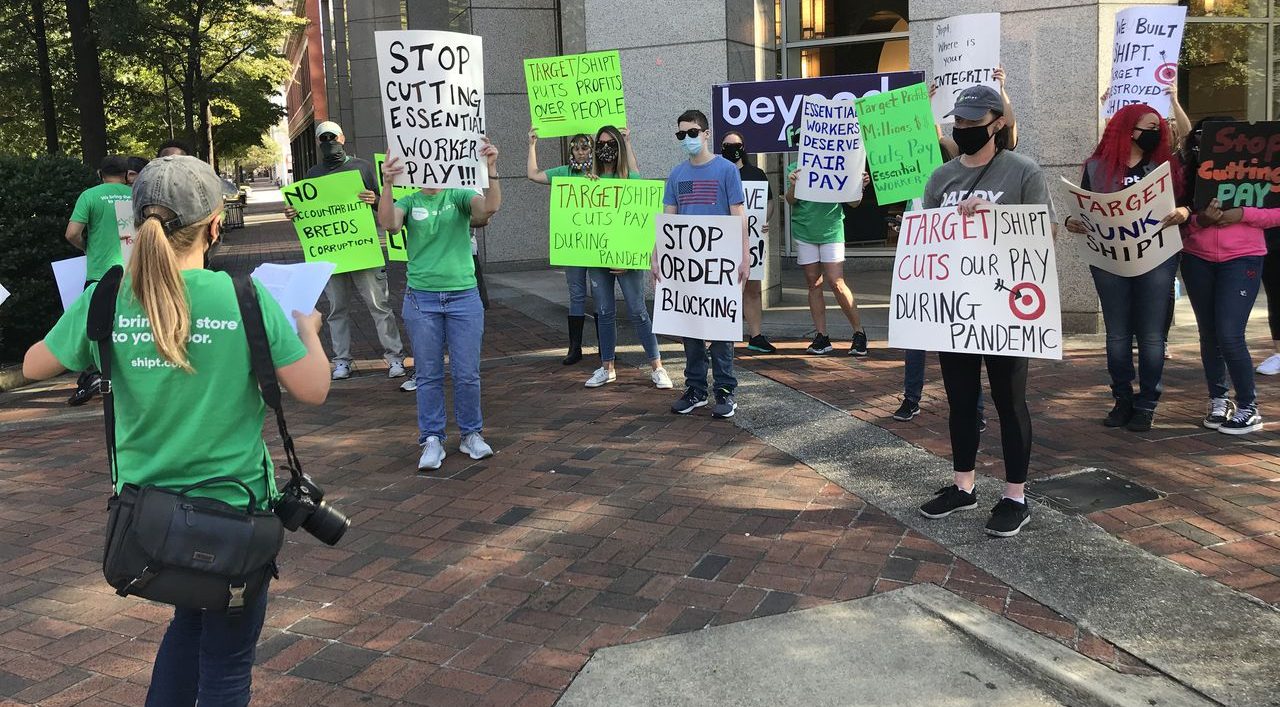 Above photo: Abby Hathcock, a Shipt Shopper and co-organizer of the Sunday demonstration outside the company’s headquarters in downtown Birmingham, addresses the gathering of protesters. Connor Sheets.

Alabama – More than 20 Shipt workers demonstrated in front of the grocery delivery company’s headquarters in downtown Birmingham Sunday afternoon. They were there to protest Shipt policies that some of the company’s delivery people – known as Shipt Shoppers – say have led to decreased wages during a global pandemic and continue to leave them without health insurance coverage, paid sick time and other benefits.

Demetria Barlow has been a Shipt Shopper since 2016, two years after the company launched in Birmingham and one year before Target purchased the company for $550 million.

She said that she has seen ups and downs during her time working part-time for the gig-economy company as it has evolved over the past four years, but that the most recent changes to the Shopper pay structure “were by far the worst.”

“Before, it was you got a $5 base pay plus 7.5% of whatever the order was in the store. Now it’s just some kind of black-box algorithm and you don’t know,” said Barlow, a 42-year-old Birmingham single mother of two. “They’re claiming that’s it’s supposed to be effort-based – you get paid more for more effort – but it’s clearly not.”

Barlow’s concerns were echoed by many at the rally who said they have seen their weekly take-home pay decrease by between 10 and 25 percent since the most recent changes to the Shopper pay structure went into effect last month. Some say that their hourly pay has dropped below the minimum wage.

Evangeline George, a spokeswoman for Shipt, addressed such grievances in an email to AL.com Sunday evening.

“We are aware that there is a very small, vocal minority that may disagree with some of the steps we take. We respect their opinions and are listening,” she wrote. “However, based on all of the data we have, and the feedback we receive from shoppers, they do not speak for, or represent, the experiences of the majority of Shipt Shoppers.”

Meanwhile, the company has experienced great success since the start of the COVID-19 pandemic. In August, Target reported that Shipt’s revenues for the second quarter of 2020 had soared year-over-year by 350 percent.

That angers people like Vanessa Bain, leader of Gig Workers Collective, a nonprofit organization that advocates for gig-economy workers’ rights. Bain, who is from California, traveled to Birmingham to join other Shipt workers at the protest. She read letters out loud from Shoppers who supported the protest but did not want to risk being retaliated against by the company for speaking their mind. And she called on Shipt to treat its Shoppers – who work for the company as independent contractors, which means they are not entitled to many protections and benefits afforded to full-time employees – better.

“[Shipt isn’t] seeing less money in their pockets, they’re seeing more. And where is it coming from? Our pockets. That’s BS,” she told the small crowd. “There is a human story behind every single Shopper who has seen their pay decrease … It is real work and we deserve real pay, not the BS that they’re throwing to us today, which is pennies on the dollar compared to what they used to pay.”

“Orders across the country can vary by a number of factors and our updated pay model better accounts for the effort it takes to complete and deliver orders, with factors like drive times for delivery, peak shopping windows, and the number of items in each order,” she said.

“We also provide transparency to shoppers with each order – including a pay range with a guaranteed minimum pay for the shop, the delivery address, and a list of all the items being purchased – allowing them to choose whether or not they want to accept the order.”

But Aly Hathcock, a Birmingham-area Shopper and co-organizer of Sunday’s protest, listed a number of other concerns that she and other Shoppers have about the company and its policies.

“There has been a lot of tipping glitches,” Hathcock, who started working for Shipt in January, said. “I’ve talked to members who’ve had tips from $5 to $80 go missing.”

She explained that she was referring to the fact that thousands of Shoppers have reported not receiving some tips. The company has acknowledged the concern in part, and in some cases has paid out past tips that had not initially gone to workers. But the Shoppers who gathered in Birmingham on Sunday said tipping glitches persist, as do other issues that they say negatively impact their bottom lines.

“About two months ago, we started seeing something called ‘order blocking,’” Hathcock said. “So, once I accepted an order, I could no longer see other orders that were available.”

The details of how Hathcock and others believe order blocking works are somewhat complicated, but the takeaway is that people who once made good money as Shipt Shoppers say that they are having a much hard time making a living as the number of orders they are able to fulfill per day has fallen dramatically.

Full disclosure: This reporter worked part-time as a Shipt Shopper for three weeks in January 2019, fulfilling a total of 12 orders.