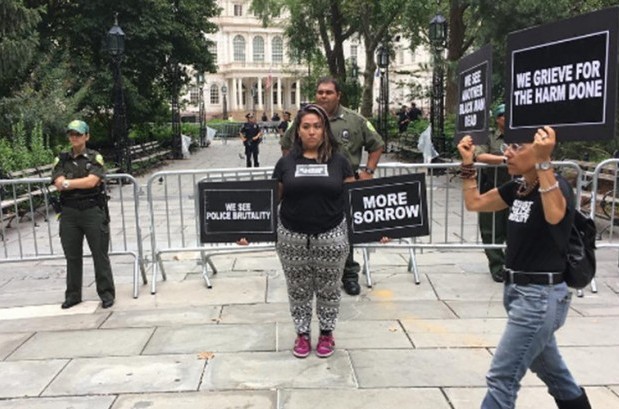 Protesters in New York City are hoping to force City Hall to shut down until the police commissioner is fired. Other demands include reparations for victims of police brutality and re-investing the NYPD’s budget in minority communities.

The all-day demonstration is being run by the Millions March NYC group, a spin-off of the Black Lives Matter movement. They are protesting against police brutality and a justice system that is not race-blind.

Million March NYC is asking Mayor Bill de Blasio to fire New York Police Commissioner Bill Bratton and end the “Broken Windows” policy, which, they say, “Frederick Douglass presciently summarized in 1845: ‘The slaveowner’s plan was to whip for the smallest offenses, to prevent the commission of large ones’.”

They are also seeking reparations for the survivors and victims of police brutality, the money for which should come out of the NYPD’s $5.5 billion budget ‒ the remainder of which would be re-invested into minority communities.

The group does not promise to remain peaceful. “I have to say I’m really tired of the way that people are always asking us to be peaceful,” Nabil Hassein, one of the event organizers, told WINS. “Why don’t you all go ask the police to be peaceful?”

“It is time we escalate our organizational tactics against this racist system, which continues to execute Black & Brown people with impunity,” Millions March NYC wrote in a Facebook event for the Monday protest.

“We’ve had enough. There has been NO accountability for” officers involved in shooting citizens, “nor do we expect any from our corrupt and racist city government,” the group added. “It is clear this white supremacist, capitalist hetero-cis-patriarchy will NEVER hold itself accountable.”

The protesters plan to occupy City Hall Park and disrupt political figures and events. There will be outreach to the courts, education, training and other activities, along with a rally scheduled for 6 p.m. local time.

The group seeks to end policing, which it says “originated as slave patrols and have never served any purpose other than to surveil, control, brutalize, and kill Black, Brown, and Indigenous people.” They also want to abolish prisons. Protesters believe that recent law enforcement changes, including the introduction of body cameras and community policing, are “fake reforms” that “ further increase the budget and power of the racist and brutal NYPD.”

The group hopes to have 1,000 protesters. The demonstration is part of a series of actions around the country on Monday.