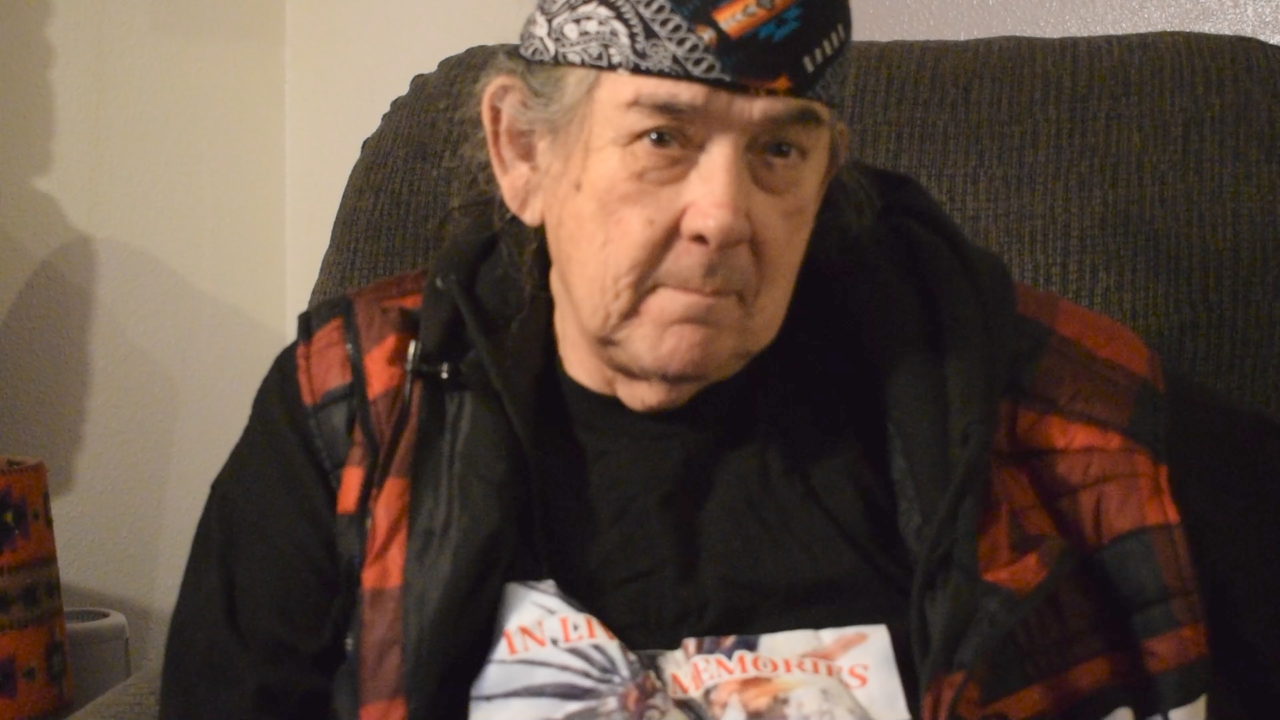 Above Photo: Cover photo of Sid Mills by Frank Hopper.

The four-day event, called The March for Freedom, will begin in Los Angeles on the National Day of Mourning, known to non-Native people as Thanksgiving, and will end on Sunday, November 28, at the Otay Mesa Detention Facility in San Diego.

“Thousands of children are separated from their families at the border every year and held in detention camps,” Mills stated at a planning meeting last Friday. “They’re asking for our help. We aren’t American Indians. We’re just Indians, same as them, and we know what it’s like to have our children taken away from us.”

Mills will lead a caravan of Northwest Native people driving from the Puyallup Tribal Administration building in Tacoma on Saturday, November 20 at 9 a.m.

The March for Freedom organizers are a coalition of Indigenous women who have been meeting and attending direct action events in Southern California for approximately a year and a half.

“We are being guided by elders, but this is an action being completely led by Indigenous women,” event organizer Ivette Xochiyotl said in a recent interview.

The march will begin at Placita Olvera, a predominantly Spanish speaking neighborhood in Los Angeles and will stop along the way at sites significant in the history of genocide endured by the original Indigenous tribes of the area.

“All of the points that we are choosing are very meaningful,” Xochiyotl said. “For example, Placita Olvera being a place colonized by the church where they used to have lynchings of Mexicans, Native Americans, and even Asians at one point, same thing for Anaheim… We are going to San Juan, San Clemente, then San Diego. So the points are very meaningful. They all have their own historical context.”

“We’re starting with the children”

The organizers plan to hold similar marches every year, each one focusing on different areas of concern facing Indigenous people.

”This time we’re focusing on immigration,” Xochiyotl explained, “but we’re not forgetting about the violence inflicted on our people. So we’re starting with the children. And the most oppressed are in cages.”

The practice of separating children from parents who are attempting to illegally cross the border began in 2017. But it shifted into high gear in 2018 when it became an official part the Trump administration’s “zero tolerance” immigration policy. It was thought this would discourage families from attempting to cross illegally into the U.S.

Instead, concentration camp-style detention facilities began filling up with children. Pictures of them sleeping on the floor under foil sheets in what looked like dog kennels caused so much outrage the policy was rescinded, but it’s thought it continues to this day.

No one knows how many

Although officially the numbers of children in detention facilities has dropped significantly since President Biden took office, a lack of transparency leaves their fate uncertain. Many are placed in foster care homes instead of being returned to their families. Some just seem to disappear.

“You know there are thousands of children that go missing from the hands of the state and the federal government,” Xochiyotl said,

This loss of children resonates with Native people from the North. The bitter legacy of the boarding and residential school era when Native children were forcibly removed from their families still haunts tribal communities. It was one of the most brutal and insidious forms of genocide imposed by the government.

Xochiyotl herself lives with the aftermath of genocide. She grew up in Mexico City, but is descended from one of the Yokut group of tribes originally located near where Bakersfield now stands.

The first governor of California, Peter Hardeman Burnett, attempted to exterminate the state’s original people. The Yokut population went from 22,000 to about 600 survivors.

“My family being one of them,” Xochiyotl notes. Her mother’s people were displaced and eventually settled in Hidalgo near Mexico City. Only after moving to the U.S. years later, did Xochiyotl begin to reconnect with Indigenous culture.

“It takes a lot of work,” Xochiyotl said, “And again, to have an elder acknowledge that… I feel seen. I feel heard.”

Support From a Famous Elder

Xochiyotl was referring to Yakama/Cherokee elder Sid Mills. It was his desire to help free the children that got things started. He recently reached out to Selina Ramirez and suggested an event be planned that would bring attention to the plight of the Indigenous children in custody. Ramirez in turn reached out to Wendy Tochi and to Xochiyotl and the three worked together to plan and organize the march.

“It’s so meaningful to have this amazing empowering elder…” Xochiyotl admitted.

Mills is a veteran of many important, historic events in the fight for Native rights such as the Alcatraz takeover, the takeover of Fort Lawton, the takeover of the BIA Building in Washington, D.C., the Wounded Knee standoff, the Puyallup fishing camp raid, and many others.

He is perhaps most well known for joining the Northwest Native fishing rights wars after winning a Purple Heart in Vietnam. He was the only survivor of a battle in 1967 that wiped out his entire company of over 200 men. But after being transferred back to the states, he attended a rally for Native fishing rights and decided to leave the army and fight for Native people instead.

Mills is an elder in the Native American Church. Over the years he formed many friendships with Native people on both sides of the border who grow the sacred peyote medicine. He thinks the Indigenous people from the North and the South, the Eagle and the Condor, need to work together and unite in solidarity.

“It is absolutely the most important message that we have,” Xochiyotl later said, “that we need to unite, because these children are everyone’s children. They’re indigenous children.”

For more information about joining the caravan leaving from the Puyallup Tribal Administration Building on November 20 at 9 a.m., contact Frank Hopper at tigerskin62@gmail.com.

For more information about The March for Freedom leaving from Los Angeles on November 25 **or to make a donation** contact Ivette Xochiyotl at ivetteboyzo@gmail.com.