Sign Of Hope Or Worry? When The Dollar Store Comes To Town

Above Photo: Melanie Stetson Freeman/Staff. Burnell Cotlon stands by fresh produce in his grocery store, Burnell’s Lower 9th Ward Market, in New Orleans Jan. 29. Mr. Cotlon started his small business here after losing his home in the aftermath of hurricane Katrina. He had been the only business in this part of town, which was leveled by flooding after a levee broke. His new competition comes in the form of a Dollar General down the street.

The economics of retail chains may seem inexorable. But communities are finding it can pay to put some limits on the trend, and to nurture local alternatives.

On a “mission to save my neighborhood,” Burnell Cotlon, an Army veteran, built his Lower 9th Ward Market literally by hand, shingle by shingle.

Today, his counter wall features cameo shots with Mark Zuckerberg. The launderette out back was donated by Ellen DeGeneres. There are shiny apples and $4.50 pork chop plates. His grocery store is seen as an oasis.

But Mr. Cotlon’s gambit to help revive a stagnant Lower 9th Ward faces a new challenge: the Dollar General down the street.

A boom in dollar stores across the United States since the Great Recession – three open every day on average – has provided both hope and despair in communities struggling for economic footholds.

Like Walmart before them, corporate dollar stores can also wreak havoc on Main Street. Community grocery stores, for one, have closed in droves after their arrival. They rarely provide fresh produce, in some cases exacerbating already barren food deserts ironically situated in the nation’s breadbasket.

Is our political divide, at heart, really all about abortion?

“We need stores, but we need the right kind of stores: small, independently owned, community minded ones,” says Mr. Cotlon. “The Dollar General isn’t it.”

Ten years into the dollar store boom, the worry that dollar stores are less a support to poor communities than a symptom or even a cause of their distress has begun to take hold in small but significant ways from sprawling New Orleans to tiny Mesquite, Texas.

A big part of it is understanding the dynamics – from taxes to incentives to consumer demands – driving the shift, and the dollar stores’ big bet on what Tulsa city councilor Vanessa Hall-Harper calls a “permanent underclass.”

The dollar store disruption, in part, shows that “capitalism is not always fair,” says David Procter, director of the Center for Engagement and Community Development at Kansas State University in Manhattan. “Dollar stores are a way to prevent economic leakage [of sales taxes to larger communities]. But the fear is that when the local grocery store ends up closing it sends a broader signal: that folks are less likely to move to those communities because it appears that maybe the community is not that robust.” 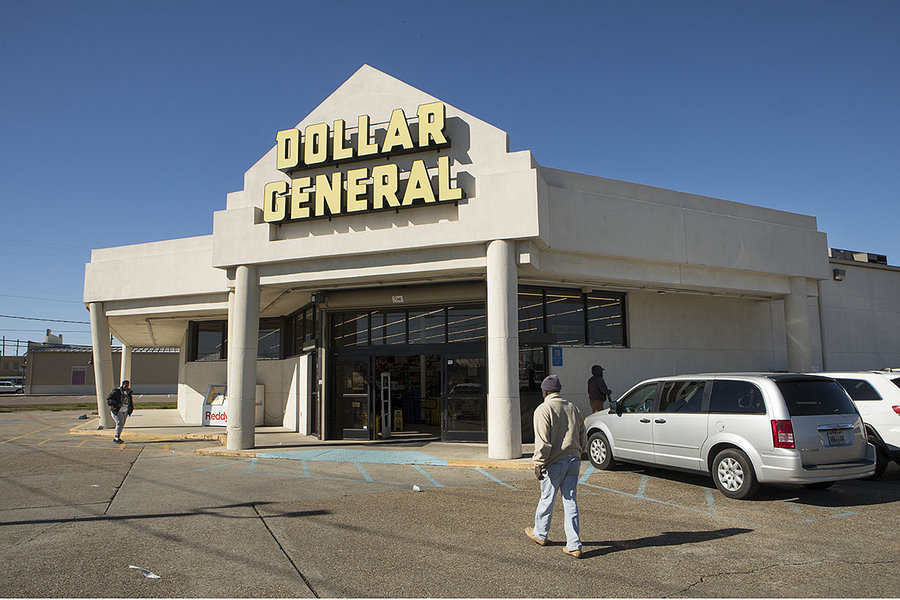 Shoppers enter a Dollar General store in the New Orleans East area Jan. 29. The city is studying whether dollar stores are detrimental to neighborhoods. One complaint is that they rarely sell fresh produce.

That pattern of decline has become a strategic map for the two major chains, Dollar General and Dollar Tree, which together have nearly 30,000 stores across the U.S. There are now more dollar stores than McDonald’s restaurants. The densest growth has been in the American rust and farm belts.

It comes at the crossroads of two trends. The first is a broader stagnation of upward mobility that plays to the dollar stores’ target audience. Forty-two percent of sales go to consumers who make less than $35,000 a year and are on some kind of government assistance. Meanwhile, larger retail trends have seen a gradual retreat of big–box store merchants, including Walmart, resulting in substantial unmet customer demand.

At a dollar store near the Lower 9th Ward, Tony Jordan proudly displays a $5 coupon he can redeem against already inexpensive laundry detergent. “It’s true they are popping up all over the place,” he says. “The result is that it has become my hometown store.”

“They send you back out happy,” says shopper Arnold Crabtree, who appreciates the loud greeting he receives from clerks upon entering.

With such reviews, city officials in struggling towns and neighborhoods have begged the mini-box stores to come. Mr. Procter says some officials have, if not rued, wondered about the wisdom of that decision.

That happened in Haven, Kansas, where the council gave Dollar General a tax break on its utility bills to bring it to town. The local Foodliner grocery lost 30 percent of its business and ultimately closed. The town council of Buhler, 20 miles away, invited the Foodliner’s owner to speak just days after it went out of business, the Guardian reported. Buhler’s council unanimously voted not to allow Dollar General to open in their town.

“I see Dollar General as I see Walmart: This is not their first rodeo,” says former Haven mayor Mike Alfers, who was part of the vote that approved the Dollar General deal. “They simply do things better, and that has an impact on local businesses.”

Sales taxes to the town have gone up. But Mr. Alfers has watched with dismay as the pocketbook dynamics play out.

“When the local grocery store was open and Dollar General opened up, you could see the exodus – a lot of people’s loyalty, if you will, flowing from the old store to the Dollar General simply because of the prices and selection,” says Mr. Alfers. 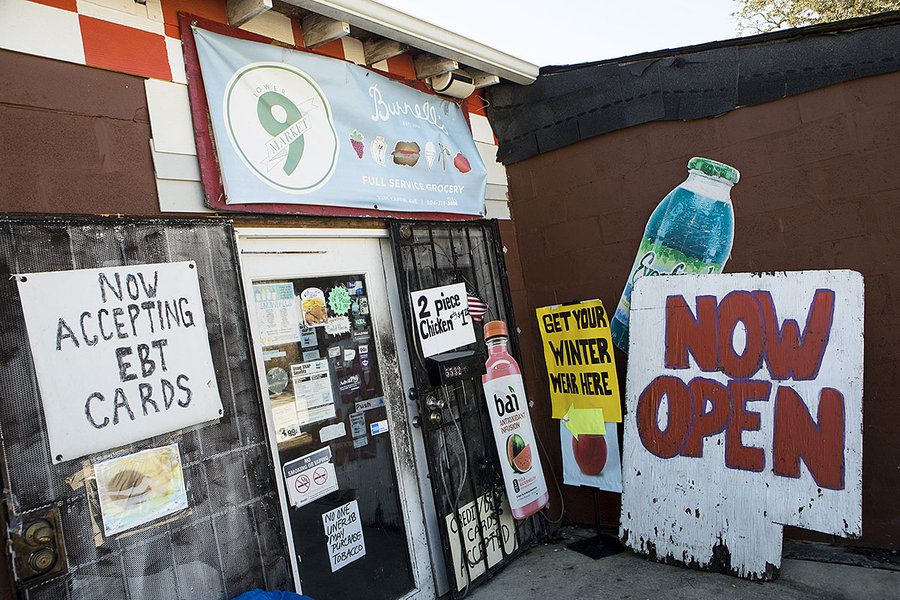 “So yes, it has involved change, and it really comes down to who you talk to, as far as if that change is good or bad.”

But if there is acceptance in Haven, other towns are finding ways to adjust – and push back. There also may be limits to dollar store growth. Dollar Tree, which also owns Family Dollar, is about to shutter 512 stores.

That decision comes as a growing number of areas, including Mesquite, Texas, and Mendocino County, California, have passed ordinances limiting the density of like-minded box stores. Pennsylvania has seen initiatives to help local grocery stores survive and even open.

And after passing a “dispersal ordinance” by a 5-to-4 margin, the Tulsa City Council ordered the city’s economic development arm to use part of a federal block grant to build a new grocery store in an area targeted by dollar stores.

That move came after massive protests and a yearslong effort by Ms. Hall-Harper, the city councilor from north Tulsa, to improve health outcomes and reverse the racial underpinnings of zoning that seemed to downplay the needs of minorities ahead of profits.

“As we’ve seen in this country through history, zoning can make or break a community,” says Ms. Hall-Harper. “And if it is done in a racist way and a method where profits are always placed over the benefits and needs of people, then you’re going to have a permanent underclass – a community disenfranchised and demoralized by its own government.”

‘Homegrown’ and holding their own

Another model has emerged in Conway Springs, Kansas.

Two years ago, Dollar General opened a store right across the street, despite protests. Today, the chain matches about 50 percent of Hired Man’s inventory with mostly lower prices.

But so far, the little independent with an in-house butcher shop is holding its own.

“The fact is we have to work longer and harder to keep up with the competition across the street,” says Jenny Osner, who co-owns Hired Man’s with her husband, Clint. “We are staying open longer on the weekends. We’re doing sales to a smaller grocery store 20 miles from us. We have tried to capitalize on what we’re good at, and our meat department is for sure what we’re good at.”

“In the end, it’s the consumer’s dollar, and it’s not my place to tell the consumer where they need to spend their money,” says Ms. Osner. “But it’s also true that to make the world go around, you’ve got to support each other. And that’s what we do here.”