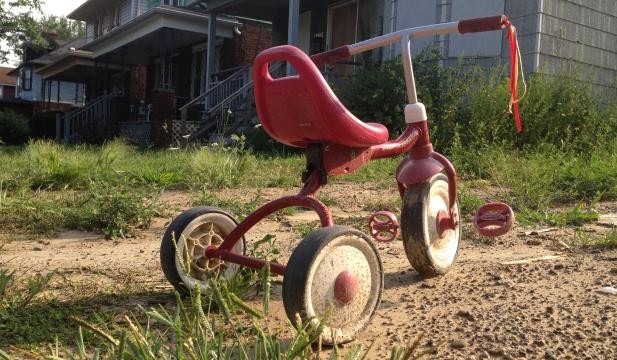 Back in July, the American Civil Liberties Union filed suit against Wayne County Treasurer Eric Sabree for foreclosing on owner-occupied homes in the area around Detroit. The lawsuit, which was anticipated for years, could dramatically affect the fate of thousands of families if it is successful. But even so, it will only impact about one-tenth of the properties headed for auction starting this Wednesday, Sept. 7, at 9 a.m. EST.

The Wayne County Tax Foreclosure auction is seen nationwide as an opportunity to buy Detroit homes on the cheap. But the people who have the most to gain and the most to lose in the auction – the homes’ current residents – in many cases have little access to information in order to take advantage of it.

In some ways, the greater tragedy of this area’s foreclosure crisis lies in the foreclosures that go unchallenged because certain infractions aren’t deemed technically illegal. There are protections for owners, for example, that simply don’t exist for renters. In last year’s auction, a full 5,000 properties went unsold, even though they could have been bought for the minimum bid of $500. Again, it was not lack of money, but lack of information, that allowed these properties to be swept aside.

These homes are now in possession of the Detroit Land Bank Authority, which has no real capacity to transition occupied properties. Meanwhile, this week’s auction will pass noiselessly over those homes, and their residents, with no lawsuit or newspaper cover story to capture the deafening silence of the people inside them.

A PROCESS THAT LEAVES RENTERS IN THE COLD

It’s true that many renters are given a hint or two about the circumstances of their property once it goes into foreclosure. But the length of the process, the obscurity of the information and the outright deception of many landlords often means many Detroiters’ homes go up for sale without them actually knowing about it. The fact is, many renters or land-contract holders miss out on the chance to buy their home in auction because they don’t know that it’s for sale in the first place.

A renter’s first inkling that his or her property may be in trouble is a foreclosure notice that shows up in a yellow bag posted on the front door. It contains no information for renter and makes no mention of the auction. Ten months can go by from the time of that first notice to the occasion of the auction. But in that time, not a single piece of government mail is addressed to the renter informing them of their situation: namely, that they have a chance to buy their own home at a cut-rate price.

Rather, information about the auction comes from nonprofit groups who engage in door-knocking or snail-mail campaigns; predatory investors who “help” residents buy their homes through outrageously inflated land contract schemes; and/or the landlord himself, who either says nothing to the tenants or in some cases deliberately misleads them about their circumstances, in order to continue collecting rent for as long as possible before the house is sold.

It’s difficult even for industry professionals themselves to know with any certainty whether a home is foreclosed and heading for auction. The Wayne County Treasury’s generous extensions tend to benefit homeowners at the detriment of renters, who are left in a purgatory that lasts from at least April to August. During that time, no rent is owed for foreclosed homes, but the foreclosure is “reversible,” in which case a renter owes not only back rent but also is subject to fees and penalties.

Even in August, a month before the auction begins, the information isn’t out there. Loveland, the foremost tracker of the WCT auction data, is often lagging in its information by a month. Even when the internet catches up, there is still no official mechanism to accurately inform renters of their situation.

At the beginning of the 2016 foreclosure cycle, in November 2015, it was estimated that 35,000 properties in the county were headed for auction. That number has now dwindled to “only” 5,500. This is good news for owners, but confusing for renters. Just as there is no auction notice confirming a property is to be sold, there is also no “safe from foreclosure” notice for those seeking to make purchase arrangements. When a landlord enters a payment plan, there is no document to prove a property is safe from foreclosure; a renter typically just has to take the landlord’s word for it.

IF IT FEELS LIKE A STEAL, THAT’S BECAUSE IT PROBABLY IS

When the auction finally comes, it happens in the soundproof chamber of the internet, which many residents lack access to and don’t have any reason to seek out if they haven’t even been informed about it. Most properties purchased in the auction are sold at a loss to buyers who make low-risk bulk impulse purchases. Many buyers are unaware of the occupancy status of an auctioned property, let alone the condition of the structure. The worst buyers walk away never paying a dollar in repairs or taxes for the home, and leave the property in limbo for another three years until the back taxes force another foreclosure.

Homes are cheap but rent isn’t. A landlord who buys a foreclosed home for $500 may charge that amount in rent every month. Even the most conscientious landlords have a split-incentive when it comes to property maintenance in a high-demand city like Detroit. As large as the city is, the habitable housing stock is extremely limited, so residents and properties usually suffer first and hardest.

On the other hand, properties not sold in the auction enter into the possession of the Detroit Land Bank Authority, which has no real capacity to manage or sell occupied properties and, as a result, they remain off the tax roll in a purgatory of government ownership. Residents can live rent-free until the toll of deferred maintenance, an irreversible water shut-off or the stress of illegitimate occupancy drives them out forever. Vacant houses quickly fall victim to scrapping and may ultimately join the queue of blighted buildings slated for demolition at the expense of the taxpayer in whose defense the foreclosure was initiated.

Ultimately, the process leads to countless scenarios where residents suddenly find themselves face to face with a stranger on their doorstep who is holding a deed and claims to have bought the home out from residents who didn’t even know it was for sale. This is the system by which some 5,000 occupied homes indefinitely swirl in the land bank’s backwaters, the yellow plastic bag stretched so thin over those nine months that it becomes transparent and practically invisible.

THE POLITICS OF TAX FORECLOSURE AUCTION

The fundamental challenge in this process seems to be this: foreclosing on properties hurts the city, but not foreclosing on them sets a dangerous precedent. A city needs taxes to function, but the taxpayer pays more to demolish homes abandoned by foreclosure than the city lost in unpaid property taxes. In this way, tax foreclosure becomes a fatal autoimmune disease, tearing up cities that it was designed to protect.

For the first time in years, tax foreclosure numbers are down. This has been lauded as a success of various payment plans, but one that belies the very real fact that nearly 100,000 of all Detroit properties are now off the tax rolls and in the coffers of the Detroit Land Bank Authority. When a person without a job gives up trying to find one, s/he is no longer counted in the unemployment numbers. Similarly, a government-owned post-foreclosure property is no longer considered delinquent, even though no taxes are being paid on it.

It is often recalled that the population of Detroit was once over 2 million, a high water mark that makes an impressive contrast to the 600,000 or so who now call the city home. Less frequently noted is the fact that, in addition to having fewer people, those who remain have fewer rights than those before them. “Effective” home ownership rates are below 50% in Detroit, down from a peak of nearly 60%. Lack of property ownership means lack of rights; taken in aggregate, the residents here have less say in their city and their own fate.

Once homeowners are decoupled from their homes, many are swept up in the chronic cycle of housing instability in Detroit, affected in no small part by tax foreclosure. Each round in the game of musical chairs weakens a person’s ties, and implied rights, to a given home or neighborhood – and makes it increasingly possible to overlook them in the already overwhelming work of addressing tax foreclosure.

In order to truly address the problem, local policy must either recognize the rights of the resident to know the circumstances of their own home, or at least recognize the benefit of keeping them in the loop. Even if that knowledge doesn’t result in home ownership for that resident, increased understanding of their timeline and circumstances can be invaluable. A PSA or targeted flyer could make a powerful impact with some basic facts including a) that the home is in foreclosure b) that the landlord is no longer the landlord c) that the house will be sold and d) that you could be the one to buy it.

2. GIVE RESIDENTS FIRST OPTION TO BUY

The auction is open to the public, and the winner is whoever places the highest bid. Currently, occupants have no advantage or priority over anyone else. Properties can avoid the competition of the public auction if the City of Detroit exercises its Right of First Refusal for occupied properties, or if the Wayne County Treasurer “bundles” occupied properties, as it currently does, to thousands of vacant properties.

Giving residents first dibs might mean selling the property for less than it would go for on the open market, but the long-term payout would be much greater. Providing a path to ownership to the current resident would encourage “continuous occupancy,” thereby reducing blight and displacement; ensure that the owner of the property has the highest possible incentive to care for the property; and build wealth in the city by retaining the benefits of the auction locally.

Individuals, community groups and media all have a role to play in building public awareness of the auction and its processes. Even if the government started issuing foreclosure notices to non-owner residents, there would still be a need for trusted communication channels to inform and empower residents throughout the long and confusing process.

In practice, the auction is a siphon to concentrate home ownership into fewer and fewer hands. But it could likewise be a powerful tool for distributed ownership – a mechanism of manifest destiny, in a way, creating homeownership for anyone willing to “settle the land.” Through the auction, a resident can become an owner for less than a few month’s rent. But first, they have to know it exists.

So many of the problems facing the city are intransigent, requiring vast sums of money or huge investments of infrastructure, not to mention a resolution of fundamental differences of opinion. The Tax Foreclosure Auction should not be one of them. Letting someone know that their house is up for sale is a hard thing to argue against and a cheap thing to implement. The home auction can be both affordable and accessible to residents. If residents of auctioned homes knew there was a buffet being served, they could at least get a seat at the table.