It has come to light that agents of the private security contractor behind a mercenary invasion group that was captured by Venezuelan forces on May 3-4, were based in Brazil during the 2018 election.

The paramilitary group behind the foiled operation, called Gedeon, was based around security contractor Silvercorp USA, which has been linked to U.S. President Donald Trump. The State Department denied prior knowledge, yet U.S.- backed Juan Guiadó, the self-declared interim President of Venezuela, and figurehead of several failed coup attempts was revealed to have had a contract with the mercenaries, which include two former Green Berets. The $212 million dollar contract between Guiadó, opposition strategist J. J. Rendon, “US advisors” and Silvercorp included “strategic planning,” “equipment procuring” and “project execution advisement”.

Skepticism is welcome, as is an an explanation for why this white guy—who says he’s NEVER once been to Colombia or Venezuela—showed up in a boat full of terrorists on Venezuela’s shores. pic.twitter.com/HbEpmLigWQ

Silvercorp USA also claimed that they have forces in Venezuela already, training for a terror campaign, which included a threat to the life of President Maduro, whom the U.S. Government had recently placed a $15m dollar reward for information leading to his arrest.

In Venezuelan custody, ex-Green Beret and Silvercorp mercenary Luke Denman confirms contract with Juan Guaido, says plan was to kidnap Venezuelan Pres. Maduro and fly him to the US as a captive #BayOfPiglets pic.twitter.com/hg46mbBfRz

The capture of American mercenaries in Venezuela has caused an uproar throughout Latin America. Especially after the statements made by Jordan Goudreau, director of Silvercorp USA, about the operation that was intended to foment a coup in the Bolivarian country. In a televised confession, captured mercenary Luke Denman said that Goudreau was under the direct command of President Donald Trump.

Silvercorp USA’s activities in the region were not limited to Venezuela, and we are able to exclusively reveal that the same organisation behind the failed invasion of Venezuela in was also previously active in Brazil.

Examination of the social media accounts of Silvercorp USA and its personnel revealed that the company was present during the election, at which the U.S.-backed far-right candidate Jair Bolsonaro came to power, in already controversial circumstances. 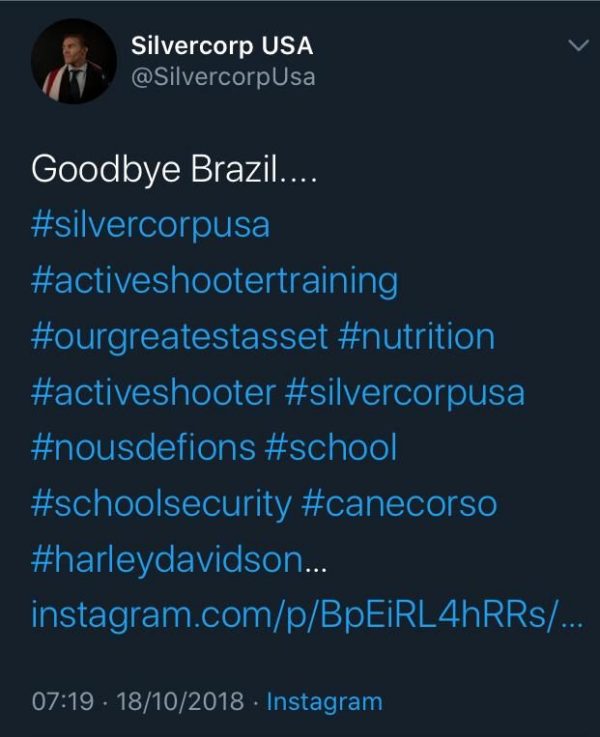 2018’s elections were extremely turbulent, with candidate Lula da Silva’s political imprisonment, carried out in collusion with the United States via the Operation Lava Jato task force, which prevented him from running. This resulted in a last minute “Plan B” candidacy of former São Paulo mayor Fernando Haddad. The election was also marked by the stabbing of Jair Bolsonaro on a campaign rally in the city of Juiz de Fora, Minas Gerais.

The election was considered the most tumultuous since democracy was restored in 1989, with the vote held within an unprecedented climate of hatred. Research conducted by Agência Publica showed that Bolsonaro’s supporters carried out at least 50 violent attacks across the country, including multiple murders.

Bolsonaro himself, who at the time was still hospitalized from the knife attack, said during an interview he gave to journalist José Luiz Datena in September 2018, that he would only accept the election result if he won.

This was seen by many as an affront to the electoral authorities and worse, as an explicit threat of a coup, something Bolsonaro had publicly threatened for decades. Since the return to direct elections, a candidate with a chance of victory has never made such an explicit and pre-emptive threat that they will not recognize the results.

Bolsonaro, a retired army captain and whose deputy is a general, was asked if the military would react in the event of an electoral victory for PT Fernando Haddad. Bolsonaro replied: “About military institutions accepting the result, I cannot speak for military commanders. I, from what I see on the streets, I cannot accept any election result other than my victory. This is a closed point of view.’. When asked if his speech could not be interpreted as anti-democratic, Bolsonaro countered, saying he does not accept an electronic voting system. At another point in the interview, Bolsonaro also said that, in the event of an eventual Haddad government, the Armed Forces could act “on the first fault” that he or his party the PT  committed.

The recently defunct Twitter account of Silvercorp USA posted automatically from its Instagram on October 18 ,2018 – 11 days after the first round of elections, and 10 days before the runoff – that they were leaving Brazil, after an unspecified amount of time. The original Instagram post and photo was deleted first. 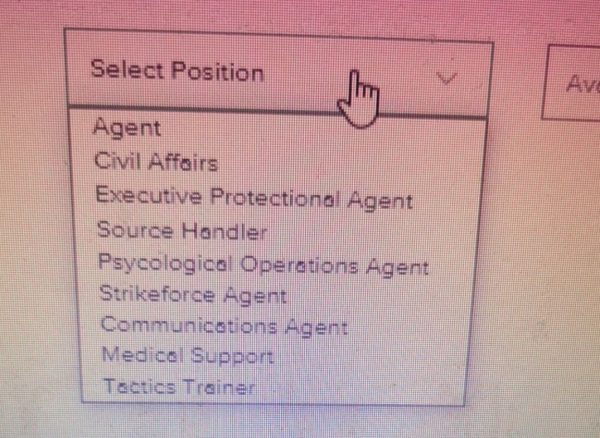 The purpose of Silvercorp USA’s 2018 presence in Brazil is unclear. Job opportunities advertised on its website include the categories, “Psycological (sic) Operations Agent”,  “Strikeforce Agent”, and “Tactics Trainer”.

Silvercorp USA’s social media posts focus on school shooting safety training, a more palatable area of their services, using hashtags such as “#activeshooter# and “#school”. Such training, especially in the context of education, would need to be authorised by the either relevant Federal Ministry, State or Municipal Government secretariats. These school safety training courses in Colombia appear to have been operating concurrently with mercenary-related activity, and also coinciding with Presidential election campaigns earlier in 2018. At time of publication, no evidence of Brazilian in-school training programmes conducted by Silvercorp USA could be found.

The presence of foreign mercenaries in Latin America is itself nothing new, Silvercorp USA itself has readily publicized that it performed services in Uruguay, Paraguay, Colombia, and Mexico, but in the past days both posts and accounts linked to the company and its personnel have been deleted, including that of the its director, and reported leader of the mercenary group, Jordan Goudreau.