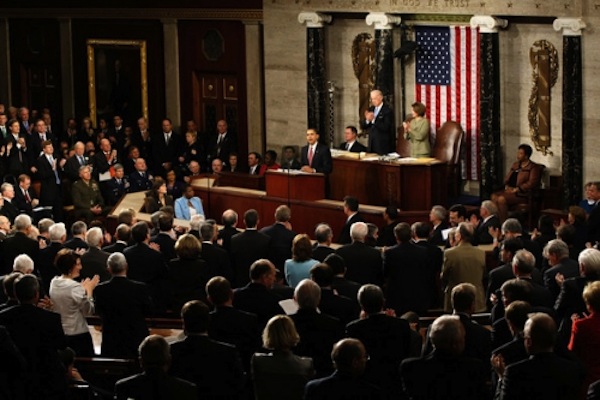 Simply Calling The US An Oligarchy Is Not Enough

A new study has found that the US is ruled by an oligarchic elite. But by ignoring the C-word — capitalism — it ends up missing the bigger picture.

It’s not every day that an academic article in the arcane world of American political science makes headlines around the world, but then again, these aren’t normal days either. On Wednesday, various mainstream media outlets — including even the conservative British daily The Telegraph — ran a series of articles with essentially the same title: “Study finds that US is an oligarchy.” Or, as the Washington Post summed up: “Rich people rule!” The paper, according to the review in the Post, “should reshape how we think about American democracy.”

The conclusion sounds like it could have come straight out of a general assembly or drum circle at Zuccotti Park, but the authors of the paper in question — two Professors of Politics at Princeton and Northwestern University — aren’t quite of the radical dreadlocked variety. No, like Piketty’s book, this article is real “science”. It’s even got numbers in it! Martin Gilens of Princeton and Benjamin Page of Northwestern University took a dataset of 1,779 policy issues, ran a bunch of regressions, and basically found that the United States is not a democracy after all:

The findings, of course, are both very interesting and very obvious. What Gilens and Page claim to have empirically demonstrated is that policy outcomes by and large favor the interests of business and the wealthiest segment of the population, while the preferences of the vast majority of Americans are of little to no consequence for political outcomes. As the authors show, this new data backs up the conclusions of a number of long-forgotten studies from the 1950s and 1960s — not least the landmark contributions by C.W. Mills and Ralph Miliband — that tried to debunk the assertion of mainstream pluralist scholars that no single interest group dominates US policymaking.

But while Gilens and Page’s study will undoubtedly be considered a milestone in the study of business power, there’s also a risk in focusing too narrowly on the elites and their interest groups themselves; namely the risk of losing sight of the broader set of social relations and institutional arrangements in which they are embedded. What I am referring to, of course, is the dreaded C-word: capitalism — a term that appears only once in the main body of Gilens and Page’s text, in a superficial reference to The Communist Manifesto, whose claims are quickly dismissed as empirically untestable. How can you talk about oligarchy and economic elites without talking about capitalism?

What’s missing from the analysis is therefore precisely what was missing from C.W. Mills’ and Miliband’s studies: an account of the nature of the capitalist state as such. By branding the US political system as an “oligarchy”, the authors conveniently sidestep an even thornier question: what if oligarchy, as opposed to democracy, is actually the natural political form in capitalist society? What if the capitalist state is by its very definition an oligarchic form of government? If that’s the case, the authors have merely proved the obvious: that the United States is a thoroughly capitalist society. Congratulations for figuring that one out! They should have just called a spade a spade.

That, of course, wouldn’t have raised many eyebrows. But it’s worth noting that this was precisely the critique that Nicos Poulantzas leveled at Ralph Miliband in the New Left Review in the early 1970s — and it doesn’t take an Althusserian structuralist to see that he had a point. Miliband’s study of capitalist elites, Poulantzas showed, was very useful for debunking pluralist illusions about the democratic nature of US politics, but by focusing narrowly on elite preferences and the “instrumental” use of political and economic resources to influence policy, Miliband’s empiricism ceded way too much methodological ground to “bourgeois” political science. By trying to painstakingly prove the existence of a causal relationship between instrumental elite behavior and policy outcomes, Miliband ended up missing the bigger picture: the class-bias inherent in the capitalist state itself, irrespective of who occupies it.

These methodological and theoretical limitations have consequences that extend far beyond the academic debate: at the end of the day, these are political questions. The way we perceive business power and define the capitalist state will inevitably have serious implications for our political strategies. The danger with empirical studies that narrowly emphasize the role of elites at the expense of the deeper structural sources of capitalist power is that they will end up reinforcing the illusion that simply replacing the elites and “taking money out of politics” would be sufficient to restore democracy to its past glory. That, of course, would be profoundly misleading. If we are serious about unseating the oligarchs from power, let’s make sure not to get carried away by the numbers and not to lose sight of the bigger picture.