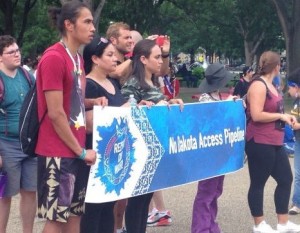 Above Photo: From thehill.com

Members of the Sioux nation journeyed to Washington, D.C. this weekend to protest a proposed $3.8 billion oil pipeline they say would contaminate their drinking water and violate sacred lands.

The Dakota Access Pipeline is set to pass beneath the Missouri River less than a mile from North Dakota’s Standing Rock Reservation, where tribal members rely on the river as the sole water supply.

Every day, the planned pipeline will transport 450,000 barrels of North Dakota oil 1,172 miles across North and South Dakota, Iowa, and Illinois, according to Energy Transfer Partners, the Dallas-based company behind the project

Young people from the reservation ran a nearly 2,000-mile relay to Washington, D.C. to deliver a petition with over 160,000 signatures to the United States Army Corps of Engineers (USACE). The agency approved nearly all final permits for the pipeline’s construction at the end of July.

Advocates gathered in front of the Supreme Court of the United States on Friday morning, and Standing Rock members met privately with officials from the Army Corps of Engineers in the afternoon. The group continued the protest in front of the White House on Saturday afternoon, even through pouring rain.

The tribe is asking that all pipeline construction be stopped. They worry that oil leaks will inevitably contaminate their water, based on the 300 oil leaks they say occurred from 2012 to 2013 alone in North Dakota.

Tribal members also argue that the agency has violated the National Historic Preservation Act, along with environmental regulations and Native American treaties, by allowing the pipeline’s construction. The Standing Rock Sioux have filed a federal injunction against the organization to prevent the pipeline from going forward.

The petition has garnered the support of celebrities, including actor Leonardo DiCaprio, environmentalist and writer Bill McKibben, and actress Shailene Woodley, who participated in part of the run to D.C. as well as Saturday’s rally.

“This is more than just indigenous rights, it’s human rights, it’s environmental rights,” Daniel said. “President Obama really puts a lot of indigenous issues at the forefront … so we’re hoping he can have some sway in the decision helping to get this shut down before his term is up.”

The president left Washington early Saturday for a two-week vacation in Martha’s Vineyard.