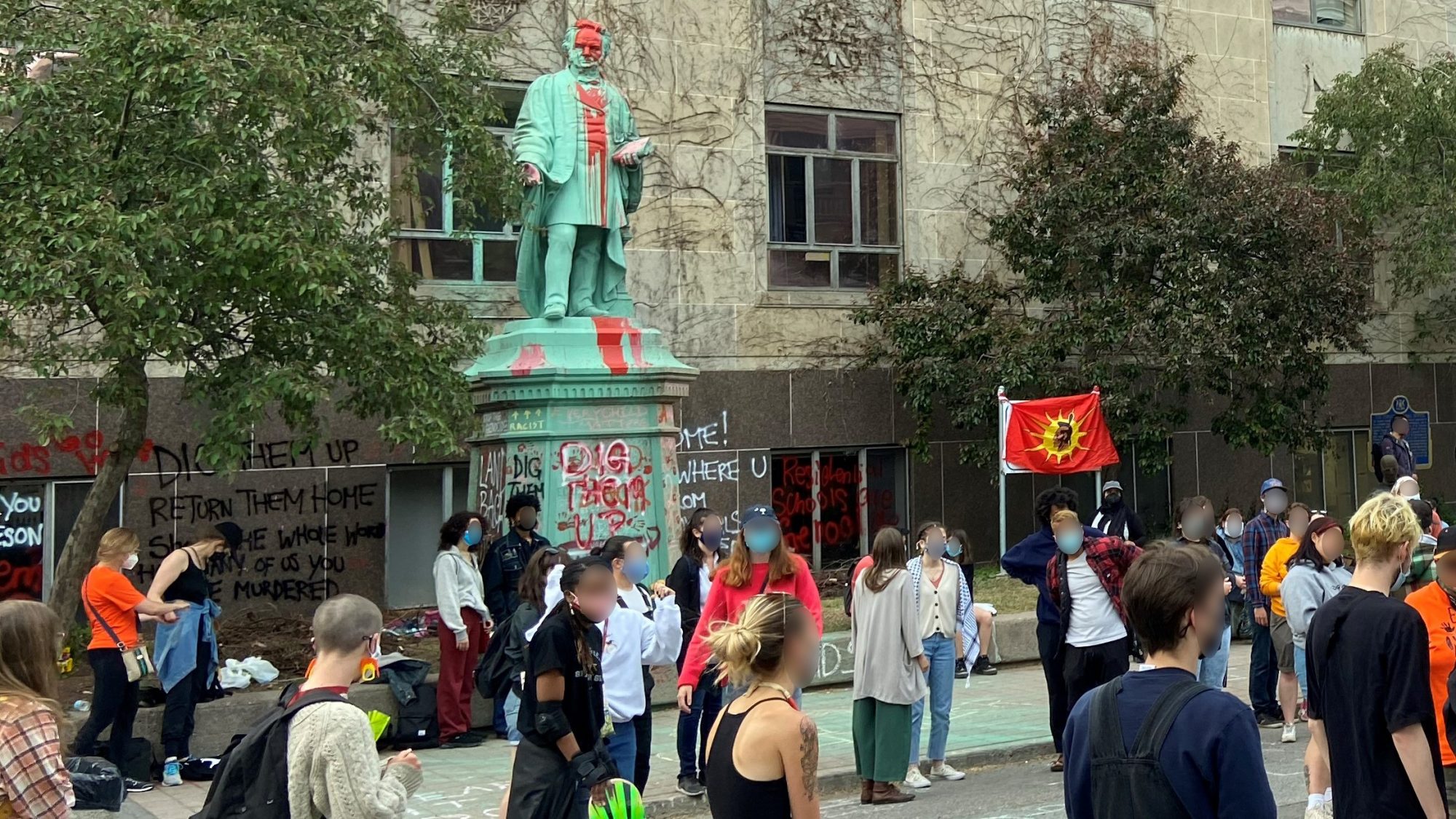 Above photo: People gathered in front of the statue of Egerton Ryerson on the university’s campus on May 31, 2021, to mourn the 215 children whose bodies were discovered at the Kamloops Indigenous Residential School. CITYNEWS/Ryan Belgrave.

Toronto, Canada – A small group of people rallied Monday in front of the statue of Egerton Ryerson on the Ryerson University campus to stage a sit-in mourning the 215 children found buried at the Kamloops Indigenous Residential School last week.

In an Instagram post, a group called X University, Indigenous Students fighting for social justice & human rights,  (@wreckonciliation_x_university) said “we will be occupying the space until we meet 215 pairs of shoes.” The group has adopted ‘X University’ in place of Ryerson University’s current name in protest and to demand it be changed given Ryerson’s role in designing the model for residential schools.

Those gathered were seen forming a circle around a drummer who was singing. Organizers declined to provide comment to CityNews.

The statue has been a point of contention for several years, with Indigenous student groups and other activists demanding it’s removal and the renaming of the university.

The statue was covered in red paint and graffiti that read “show the world how many of us you have murdered”, “dig them up” and “land back,” however the group that staged the sit-in said they were not associated with the graffiti.

On May 27, the bodies of 215 children were found buried at the former site of the residential school in British Columbia, some as young as three years old.

The discovery has been followed by a national outpouring of grief and renewed demands to implement the 94 calls to action in the Truth and Reconciliation Commission, which spent years studying the government-sponsored, church-run schools.

The nearly 4,000-page account details the harsh mistreatment inflicted on Indigenous children at the institutions, where at least 3,200 children died amid sexual and physical abuse and neglect.

NDP leader Jagmeet Singh has called for the government to investigate and fully fund the identification of other sites where children were buried in unmarked graves.

The Kamloops school operated between 1890 and 1969. The federal government took over the operation from the church to operate as a day school until it closed in 1978.