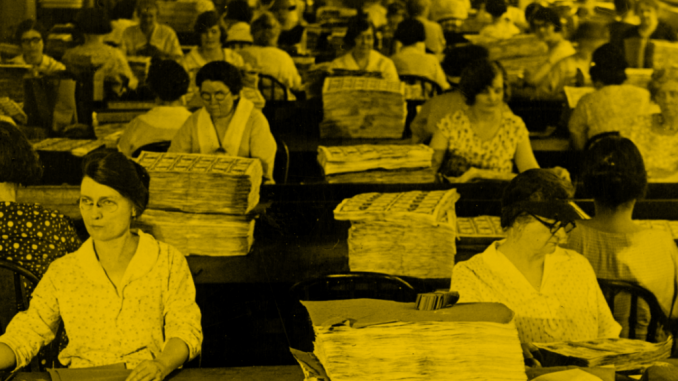 Situating Basic Income And Job Guarantee In The Welfare State

Above Photo: Library of Congress

It’s been a slow few weeks with not much to write on and so I’ve asked around for things people might want to read about. One topic that came up frequently was Andrew Yang’s universal basic income (UBI) and the usual job guarantee (JG) questions. Here I try to offer a bit of a fresh take on it by trying to explain UBI and JG within the context of regular welfare state design and, to a lesser degree, within the context of socialist theory.

Welfare states generally consist of services (child care, education, health care) provided in-kind and cash provided to certain categories of people. Here I only want to talk about the cash welfare state because that’s the one relevant to UBI and JG.

A well-designed cash welfare state initially observes that there are three age groups in society: children, working-age adults, and elderly people. The first and last are not expected to work and so they should receive a cash benefit: child allowance for children and old-age pension for adults. These age-based payments are the easiest part of the welfare state because eligibility is clear and the only thing you need to fight about are the benefit formulas.

Once you’ve removed children and elderly people from the picture, you still have working-age adults (18 to 64) to deal with. At any given time, a large majority of working-age adults are indeed working and receiving a wage. But some are not. This age group presents some issues because people disagree about what categories of people should be working and about how to determine whether someone falls into a given category (e.g. whether they are disabled or not).

The risk of this lenient approach is that less people are employed at any given time than a stricter approach that did not provide benefits for some of the categories or that construed the boundaries of those categories more narrowly. As a proponent of the lenient approach, I find this risk mostly overblown empirically because working-age employment rates are not lower in countries with more generous welfare systems. I also find the risk to be overblown as a normative matter: slightly higher economic output is not worth the pain caused by a stingy welfare state.

For Most, JG Is About Unemployment

The job guarantee, which provides unemployed people benefits equal to the minimum wage provided they work 40 hours a week doing tasks assigned to them by the welfare office, is a fairly straightforward version of the workfare approach to unemployment benefits.

In general, unemployment systems consist of money and active labor market policies (ALMP) that transition people back into employment.

Like the cash welfare framework discussed above, ALMP regimes can also be understood as sitting on a spectrum ranging from lenient to strict. Lenient regimes generally consist of optional training, education, job search assistance, and so on. Stricter regimes require the unemployed to do specific activation tasks like submit a certain number of applications or attend a certain number of hours of training, with the strictest ALMP regimes requiring individuals to work for their benefits, also known as “workfare.”

In general, the lenient ALMP regimes are more favored by the left while the stricter ones are more favored by the right. For instance, in Finland, the last conservative government adopted stricter ALMP requirements for those receiving basic unemployment allowance while the new center-left government has promised to undo those requirements. In Australia, Work For The Dole was established by a right-wing government while the Labor party signaled ahead of the prior election that it would get rid of it.

For Most, UBI Is Also About Unemployment

Although UBI discussions are a bit more topically expansive, the truth is that UBI is also really about unemployment benefits. This is why it gets brought up so much alongside discussions of automation-induced unemployment.

UBI is conceptually about unemployment because the other things its advocates talk about are contingent features of our current system that could be changed. For instance, UBI advocates who fixate on means-testing (i.e. benefit programs that use income tests for eligibility) are right that the US currently relies heavily on means-testing, but wrong to think that UBI is the only way to get rid of means-testing. We can see how wrong this is in the categorical eligibility approach discussed above, which does not use means-testing.

So the actual idea of UBI, as discussed by most of its advocates, is to create a basic unemployment allowance with no ALMP that is paid to both employed and unemployed people. From there various details come in about how to finance it that can change the implications of the program, but this is really its basic thrust: unemployment benefits for all, including the employed.

JG solves the benefit trap problem by making unemployment just as work-intensive as employment. This removes the possibility of idly receiving unemployment benefits, which means, in Wray’s words, that you no longer need to make “employment preferable to idleness” to get unemployed people to take up work.

UBI solves the benefit trap problem by making benefits the same for employed people and unemployed people. This removes the loss of benefits that comes from taking up work, which also tilts the balance somewhat away from idleness and towards employment.

In my view, both JG and UBI are inferior ways of treating unemployed people. Instead, I favor a rather conventional approach of giving unemployed people money based on their prior earnings (or a basic amount if they have no prior earnings) and optional ALMP. This seems to work pretty well and, for as much as people worry about the unemployment benefit trap, the truth seems to be that it doesn’t matter that much, meaning you can have a nice high-income economy even with an apparently severe unemployment benefits trap.

In some of the more niche areas of the discourse, the UBI discussion gets muddled because there is a long-standing socialist proposal called the “social dividend” that is similar to a UBI in the sense that it provides all working-age people (or sometimes even more than that) a cash benefit. However, the social dividend is not about unemployment or really welfare at all. Instead, it is one of the socialist answers to the question of what to do about capital’s share of the national income.

This social dividend approach (which I’ve called a “universal basic dividend” in a nod to the UBI discourse) is what I advocate in my paper Social Wealth Fund for America.