Six Months After Hurricane, Puerto Ricans Are Still Without Light 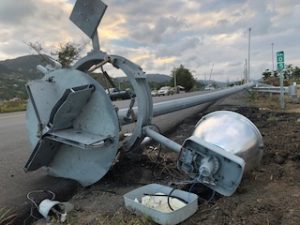 Light posts hang crookedly over buildings, beautiful two story homes are now one level memories of greatness, debris and destruction blend in with the beautiful landscape of the San Lorenzo batholith, and the glow from candles lighting the dark night can be seen from the hillside of Yabucoa, Puerto Rico.  As the island enters into it’s six month anniversary of Hurricane Maria.

Puerto Rico, a peaceful nation, has had a long history of struggle. In 1492, the dominant indigenous culture was that of Taino. Tainos almost reached extinction due to the exploitation brought forth by Spanish settlers, including infectious diseases carried by European Colonizers and warfare.

The island has experienced an enormous amount of outside influence, because of its prime position to act as a military post. Puerto Rico’s geographical location also makes it a stepping stone in passage for countries such as Europe, Cuba, Mexico, Central America and the northern parts of South America. Due to the Spaniard loss in the Spanish-American War, the United States gained possession of Puerto Rico. Yet, it was not until the passing of the Jones Act in 1917 that Puerto Ricans officially became US Citizens. By becoming a commonwealth of America, this meant that Puerto Rico would now have access to American resources and disaster relief.

However,..…in Yabucoa, Puerto Rico no hay Luz!!  Despite it being six months later.

Yabucoa is a municipality located in the southeastern part of Puerto Rico. On Wednesday September 20th, 2017 at 2 AM, Hurricane Maria made landfall in Yabucoa, Puerto Rico. Now, six months later, only 35 percent of Yabucoa has access to some form of power, which is provided by generators. Of this 35 percent, it is mostly comprised of municipality buildings (i.e. grocery stores, hospitals and local businesses), and the very few families who can afford a generator. A generator is used to run household utilities such as a few lights, a refrigerator (a place where medicine & food is stored), as well, if fortunate enough, a washer and dryer. So, how much does a generator cost, you ask? Generators can typically cost up to $4,000 to $8,000!! (This does not include the inflation prices caused by price gougers due to the sudden and high demand of generators on the island.) To fill a 5 gallon generator costs $14 dollars a day. How much a family utilizes, is dependent upon the household needs. The main question here is, why the city that was impacted the most by the hurricane is the last to receive help? 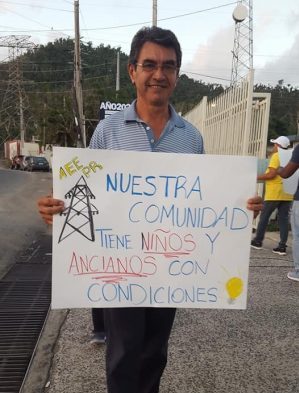 A protest took place today, at the sub station of Yabucoa (the electricity company). The protest was in response to First Lady Beatriz Areizaga action of removing  Cobra, an electrical company from the states, from Yabucoa and placing them in another municipality called Humaco.  Protestors are sending a message that they have been without lights for six months and they have been abandoned by the goverment. They are also saying they cannot continue living with generators and funding the high cost of gas and repairs for generators. The protest lasted two hours, and had 40-80 activists on site.

Col. Jason Kirk states that a shipment of more than 7,000 poles and nearly 400 miles of conductor wire are slated to arrive in the next two weeks, hence his firm belief in 95% of Puerto Ricos power being restored and all U.S. Army Corp Engineers will be off the island by mid April . However local governmental sources report that Orocovis, Las Piedras, Yabucoa, Comerio, and San Lorenzo are still completely without power. A local media source named metro, reported that some mayors stated its not from the natural disaster, but from logistics and poor communication.

As Nikki Giovanni said the power is with the people. True power is when you can decide to live your best life without hinderance. To live your best life you need resources. The people in Yabucoa are being denied resources. Therefore they can’t live their best lives, therefore they are not in control, therefore their power is being stripped away from them. USA Today wrote an article about how Yabucoa is being left behind and being ignored by state and government. Residents vividly remember that 2 am fatal morning when the 155 mph winds began. Now six months later, 65% of the island is without electricity.

On an island that has been invaded and passed around from one conquering nation to another, some residents believe it’s time Puerto Rico takes a stand. America’s recent past actions show that the island holds no true benefit being an American territory.   No hay luz. A city without lights but not without  love. Love will always conquer all. “Like all closings to bad relationships,” says Julio, a local native, “it’s time Puerto Rico loves itself and stand up and says ENOUGH.” 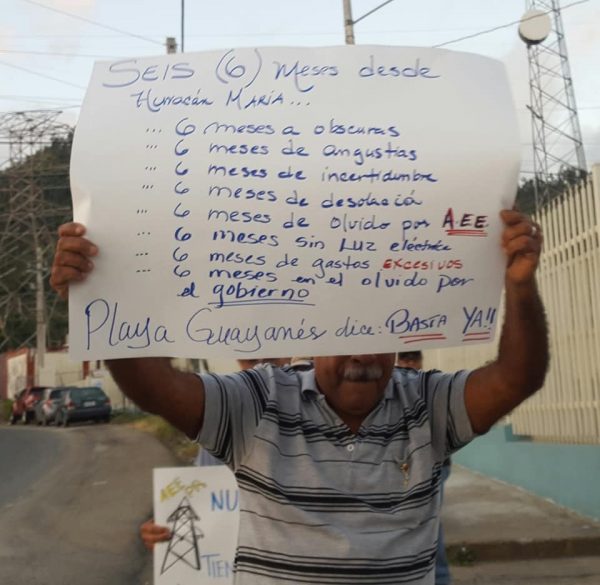