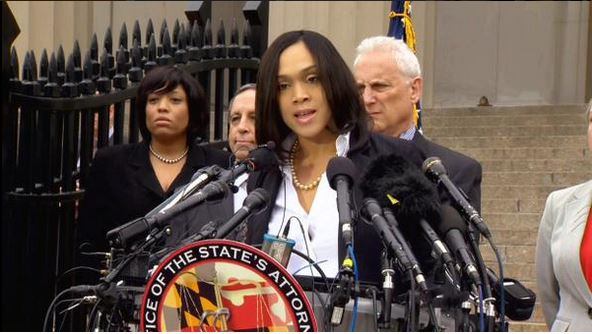 Above: State’s Attorney Marilyn Mosby announcing charges being filed against the six police officers involved in the killing of Freddie Gray.

Note:  Today there will be a series of five marches coming from different parts of the city and all meeting at McKeldin Square at 5:00. State’s Attorney Mosby’s message to protesters was positive and thankful and she said: “To the youth of this city, I will seek justice on your behalf; this is a moment, this is your moment. Let’s ensure that we have peaceful and productive rallies that will develop structural and systemic changes for generations to come. You’re at the forefront of this cause, and as young people, our time is now.”

Throughout the Penn-North Station area where Freddie was arrested, constant honking of horns could be heard as people celebrated this very important first step toward justice for Freddie.

Our hope is this is the beginning of a major transformation of the Baltimore Police Department. This kind of accountability that has been missing in Baltimore when it comes to police abuse for many years. Baltimore has a terrible history of police abuse and violence that must be overcome so they can be part of the Baltimore community. It is long past time to end police violence in African American communities; for the police to stop serving as an occupying force and for them to begin to work with the community to uplift Baltimore. And, let’s hope that these steps toward transformation in Baltimore is the beginning of nationwide changes in how police operate in communities across the country.

Mosby Tells Freddie Gray’s Family “No one is above the law.”

Mosby message to protesters: “I commend your courage to stand for justice” and says “I heard your call for ‘no justice, no peace. Your peace is sincerely needed as I work to deliver justice on behalf of this young man.”

The six Baltimore police officers involved in the arrest of Freddie Gray – who died last month after being injured in police custody – have been charged criminally, State’s Attorney Marilyn Mosby announced Friday.

Officer Caesar Goodson Jr., 45, who was the driver of a police van that carried Gray through the streets of Baltimore, was charged with second-degree murder, manslaughter, second-degree assault, two vehicular manslaughter charges and misconduct in office.

Officer Edward Nero, 29, was charged with second-degree assault and misconduct in office.

Warrants were issued for the arrest of all six officers. It wasn’t immediately clear where the officers were Friday morning.

Mosby’s announcement on the steps of the War Memorial Building was greeted with cheers and applause.

She said she told Gray’s family that “no one is above the law.”

Gray, 25, was chased down and arrested by Baltimore officers on April 12 and died a week later.

His family has said he suffered a spinal cord injury and a crushed voice box. After bystander video of the arrest surfaced, showing Gray dragging his feet as he was put in a police transport van, there have been cries for charges against the officers.

Mosby said Gray was improperly arrested on April 12 because officers had no probable cause to detain him.

In a detailed recounting of the events, Mosby described Gray being repeatedly denied medical attention by police officers, even as he asked for medical help and later was unresponsive in a police van. Gray suffered a “severe and critical neck injury” as a result of being handcuffed, shackled and being unrestrained in the van.

Mosby said an investigation found officers placed Gray in wrist and ankle restraints and left him stomach-down on the floor of a police van as they drove around West Baltimore. Despite his repeated requests for medical attention, they did not provide it and continued to drive without securing him in the van, she said. Officers on at least five occasions placed Gray in the van or checked on him and failed to secure him, she said.

By the time they reached the Western District police station, he was not breathing and was in cardiac arrest, she said.

Mosby said her office did a “comprehensive, thorough and independent” investigation that began April 13, the day after Gray was injured.

“My team worked around the clock, 12- and 14-hour days,” she said. Mosby worked quickly in filing charges. Balitmore Police handed over their investigation to her office Thursday, one day earlier than they had promised. The Fraternal Order of Police asked Mosby to appoint an independent prosecutor in the case, citing her ties to the Gray family’s attorney, Billy Murphy, as well as her lead prosecutor’s connections to members of the local media.

“While I have the utmost respect for you and your office, I have very deep concerns about the many conflicts of interest presented by your office conducting an investigation in this case,” wrote Gene Ryan, president of FOP Lodge 3. The FOP letter also expresses concerns regarding Mosby’s marriage to Baltimore City Councilman Nick Mosby. “Most importantly, it is clear that your husband’s political future will be directly impacted, for better or worse, by the outcome of your investigation,” the letter states. “In order to avoid any appearance of impropriety or a violation of the Professional Rules of Professional Responsibilty, I ask that you appoint a Special Prosecutor to determine whether or not any charges should be filed.”

Mosby responded to that request by saying: “The people of Baltimore City elected me and there is no accountability with a special prosecutor.” “I will prosecute any case within my jurisdiction,” she added.

Following Gray’s death, demonstrations and protests began peacefully but turned violent on Saturday and Monday. Monday’s events included rioting, arson and property damage in pockets of the city. Officials responded by declaring a state of emergency, instituting a nightly curfew and calling in help from state troopers and the Maryland National Guard.

Mosby called on the public to remain calm. “I heard your call for ‘no justice, no peace,'” she said. “Your peace is sincerely needed as I work to deliver justice on behalf of this young man.”

Word traveled quickly of the charges against the officers. In West Baltimore, cars honked their horns. A man hanging out of a truck window pumped his fists and yelled; “Justice! Justice! Justice!”

At the corner where Gray was arrested, 53-year-old Willie Rooks held his hands up in peace signs and screamed, “Justice!” Meecah Tucker, 23, wearing a T-shirt that read, “I Bleed Baltimore,” said: “If it was one of us doing that against a police officer, it would be first-degree murder.”