Above photo: Subcomandante Marcos communicates by radio with his soldiers in a road close to the Zapatista stronghold of Prado Pacayal, in southern state of Chiapas, March 22, 1994. Heriberto Rodriguez.

Face the facts. We are tied to our devices in ways that are incredibly useful for organizing, but that also expose us to isolation should the state and companies take away these technologies. Cell phones and the internet rely on corporate infrastructure and is subject to both government surveillance and service denial. What do we do when social media bans anti-capitalists and anti-colonialists? What do we do when our cell phones fully become monitoring devices we willingly keep by our side, all to the benefit of state intelligence services? What happens when our cell phone numbers are blocked from service? How will the revolutionaries continue to communicate locally, regionally, and internationally?

These are the questions that have been left in the dust, forgotten or ignored in favor of more romantic visions of armed struggle. People forget; no struggle has ever been successful without robust communication networks that are not subject to state control. From the French resistance in WWII to the Zapatistas in the Lacandon Jungle, communications matter!

Here, we will propose ways that you can start building this infrastructure, TODAY. As we slip further into the fascist future, we must build, lest we be left defenseless and disconnected from each other.

In order for us to build useful infrastructure, we must understand what needs we need to fill. Simply, these can be broken down into four categories: 1) immediate comrades /affinity group, 2) larger community of accomplices, 3) regional networks of resistance, 4) national/international news & resource sharing. We will examine the technologies and skills you will need to fill each of these.

This group can use cheap, commonly available radios such as the 5 watt Boafeng UV-5R, to communicate at longer ranges of up to 10 miles, much further using repeaters. With an antenna upgrade, you can receive signals from much further away. For UHF/VHF a Dual Band Slim Jim antennas with 16 foot cable, tied up high, in a tree for example, can help a lot with range.

The issue with these radios for small group tactics and real time coordination is a lack of encryption. There are patches to allow for encrypted transmission, but to implement these, you need to understand that a) this is illegal, b) this requires technical skill to implement. Encryption should only be used for transmitting sensitive information to protect immediately actionable information.

Another option to investigate for Immediate Comrades / Affinity Group / Collective would be business band radios. These radios are sold with encryption, but are much more expensive. You can get an FCC license if you have a registered business or non-profit, something to leverage to get equipment / experience if this is a route your group decides to take. This is a really expensive option, but might be worth trying. An additional benefit to this type of license is the ability to set up repeaters. GMRS is the only radio option other than Ham that allows radio repeaters.

Remember, encryption only delays decoding of messages. Good for immediate actions, but you still need to be careful not to transmit sensitive names/locations. Encryption is best used for small groups. If there are thirty affinity groups, all operating on multiple frequencies with encrypted transmissions, it reduces the opportunity for the compromise of the entire network. Instead of one snitch, they would need thirty. This horizontal organizing and compartmentalization is extremely important. VHF/UHF would be the preferred band for this type pf line of sight, close communications.

Now let’s imagine there are thirty groups operating in a city. Some providing medical services, some providing intelligence, some providing direct action. How can they coordinate if they are all operating on encrypted radios? They need to have a general band for communication. This band would be accessible using any of the personal radios used by the previously mentioned Immediate Comrades / Affinity Groups / Collectives, but would not use encryption. That means this could be used to coordinate.
During actions, one person per Affinity Group / Collective (referred to as a ‘squad’) would act as the comms coordinator. They would have both a radio dedicated for their immediate comrades encrypted communications, and a separate radio tuned to the general band. Should a need arise, say with a direct-action group for medical assistance, the call would go out from the comms coordinator to all other comms coordinators. This would allow medical squads to determine who is closest and send assistance, while also keeping situational awareness for all of the people on the general band. VHF would be ideal for this communication between small groups, only limited by the horizon. 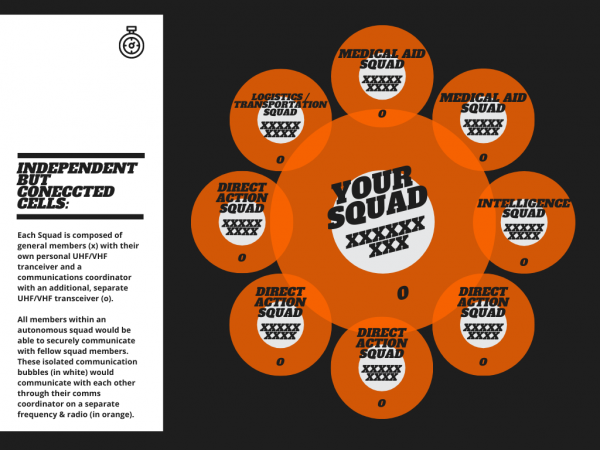 Moving out of the city or the affinity group, long distance communications will be needed for regional coordination, news, and resource sharing. This will require range over anything else. HF radio is what will be needed for this to be completely autonomous, but VHF can be used via repeaters, if that is the only affordable option.

Regional communications via radio should only speak of things that are not security critical. Security critical information needs to be transmitted using code, but again, this is crack-able, so be very careful. HF can be used to transmit data, files, and images, over long distance without the use of internet. This is a huge benefit. HF will also be useful for broadcasting public news, though pirate FM transmitters would be preferable even to that.

It is important to get people experienced in the local ham radio landscape, so to speak, so that you understand what frequencies would be useful for creating a regional band plan. Band plans share designated frequencies for sharing information, coordinating, data transfer, image sharing, and socializing. They basically create spots in the radio spectrum where you can tune in and connect with like-minded people. Remember, band plans give some level of pre-planning for frequency use, but anyone can listen or transmit on those frequencies. We will be sharing an article on creating band plans soon.

Do not neglect the value of runners passing information orally and in person. Runners are still an important part of information sharing in Indigenous communities today. This should be your primary means of sharing extremely sensitive information. 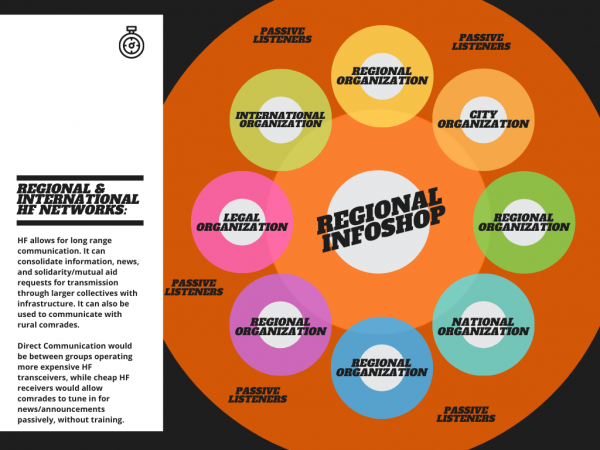 Communication between comrades nationally and internationally has long been important. HF provides the ability to communicate with comrades without the censoring of the internet or phone calls. HF radios used for regional communications can also be used to spread messages for the world to hear. Let us say that Alaska blocks all communication regarding Indigenous resistance. An HF transmitter could broadcast news and images to comrades in so-called Canada who could propagate it through the internet. It also allows for direct communication with communities in rebellion across this hemisphere and globally with the right technical expertise. HF receivers like the Tecsun PL-365 Pocket AM/FM/SSB Receiver are also cheap enough to spread across your community to allow them to receive news using these radios.

What Should I Buy?

Handheld Radios for Individual Use in Small Groups

These are small handsets that would be used to primarily communicate during actions between individuals and small groups. They are self contained, portable, lightweight, and simple to use while moving.

Also remember, if you are in an Urban situation where arrest is common, don’t buy expensive handheld radios that will get confiscated or destroyed. Use a UV-5r for temperate climate with little precipitation or a UV-9r for cities with lots or rain or dust. These radios are cheap enough that their loss is not going to impact your finances in the same way as losing an expensive Kenwood for example. 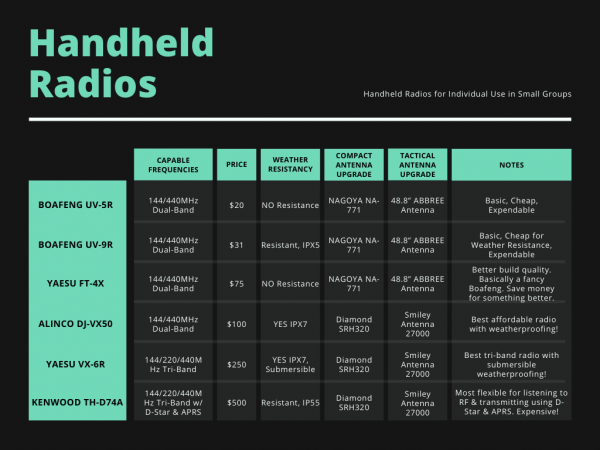 Packable Radios for Individual/Group Use Regionally/Internationally

These systems are designed to work out of a backpack or a vehicle, allowing you to vary transmission location to avoid having equipment confiscated. All you need to run one of these is a transceiver, a power supply, and a microphone or digital interface.

These radios use the HF band, meaning you can make contacts around the world with enough experience and know-how. HF also can be used in digital modes to send text, photos, and location. These require experience to operate effectively, which is why we recommend getting a License and practicing field deployments while hiking or driving regularly. This will hone your skills and make this equipment more valuable when transmission become more critical to resistance. Practice, practice, practice with HF! 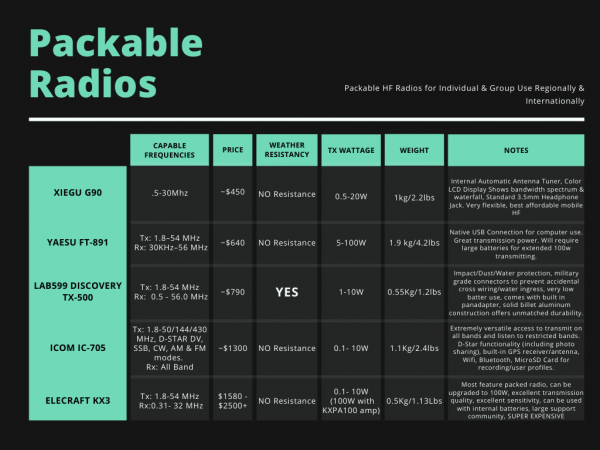 The top recommendation we have for HF would be the only weatherized transceiver on the market, the Lab559 Discovery TX-500. Light weight and with very low power consumption, this radio can operate off-grid for a very long time. It also has a very intuitive user interface, making the learning curve a little less steep.

As for the required ancillary equipment, for a power supply we recommend the PowerFilm Lightsaver Max, which provides enough power for longer sessions (18Ah!), charging of other devices, and integrates the solar panel into a compact, packable unit. For the antenna, we recommend the CHAMELEON ANTENNA MPAS 2.0 Portable HF Antenna for the Xeigu G90 or the Elecraft KX3, which have internal antenna tuners (optional on the KX3) and the Super Antenna MP1 (MP1DXMAX is a good model) for all of the transceivers as it doesn’t require a tuner (you tune it manually). External automatic antenna tuners can be used with radios lacking an internal antenna tuner to work with the Chameleon MPAS 2.0, which is the best of the bunch.

a.       These are permanent, fixed installations. That means you need to be licensed and observing the law while transmitting, lest all of your expensive equipment be confiscated. Recommended options are really dependent on the location of your transmitter and methods being used to communicate. Building based should only be considered after becoming familiar with using some of the above options, or if disability makes a stationary, building based system preferable.

If you are disabled or are an elder and want to build a home based station, there are lots of good reasons to do this. Base stations have capabilities that the above options do not have. You can provide valuable assistance to the cause simply by monitoring the airwaves for intelligence or interacting with other people on the air to get information. Again, you will have to follow the law and protect your true intentions because your location is fixed.

A go-to for tranciever is the Icom IC-7300. This radio offers almost every functionality you can ask for and is on the affordable side of the spectrum for base stations, at around $1100.

As you get into broadcasting, realize that the strict control of the ability to transmit is do to the fear of the state. They realize that radio is a decentralized form of communication that can be used by freedome loving people to question their power. The air has always been free.Around the world, our Indigenous ancestors used the air to communicate with smoke, with fire, with drums, and with flags. That air was not the colonizers’ to take. It is time to reclaim it and put it to Indigenous use for our liberation and for the liberation of all of humanity from colonialism & capitalism. Hope to hear from you soon!

Also OH8STN has some videos about wilderness operating and equipment that might help if you are injured or older.

David Casler has an excellent series for people to study for their Technician and General License. If you want to get practice and practical knowledge, getting licenses allows you to start learning by gaining experience. The material for the tests is less relevant than what you will learn once you start transmitting, so don’t sweat it. Pass the test, then the real learning starts.