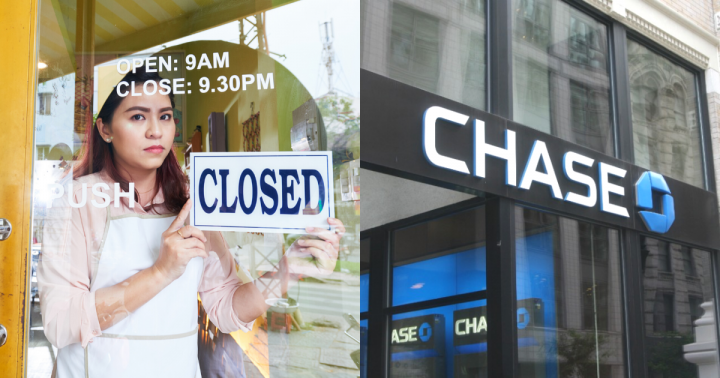 Above photo: From Metroplex Social.

Allows banks to make their own rules.

NOTE: Small businesses have been mostly shut out of receiving loans, while large publicly-traded firms get $300M in small-business loans. AP reported, “Companies with thousands of employees, past penalties from government investigations and risks of financial failure even before the coronavirus walloped the economy were among those receiving millions of dollars from a relief fund that Congress created to help small businesses through the crisis.” Further,  large restaurant chains like Potbelly and Ruth’s Chris Steak House qualified to get the maximum $10 million in loans despite employing thousands of workers.

These large corporations and chains already have access to capital markets and Federal Reserve programs, while small businesses do not.

As a result, small businesses have been blocked by the big banks from getting the loans.

Business is down 90% at my neighborhood dry cleaner. They’re still trying to pay their employees even though there’s no work. But they can’t get a small business loan because their bank stopped taking applications

Somehow all of these companies got loans. 😠 pic.twitter.com/xdycYAD02c

Small businesses are fighting back in court with four class-action lawsuits filed against banks for giving out federal stimulus funds earmarked for small businesses, accusing them of channeling funds to the largest companies to collect bigger fees. The small-business owners claim some of the country’s largest banks unfairly favored applications from their wealthiest clients from government stimulus programs rather than from small businesses.

The claim is that Wells Fargo, Bank of America, JPMorgan Chase and U.S. Bancorp “rigged the loan process to benefit their bottom line,” the Stalwart Law Group, which filed the lawsuits Sunday in federal court in Los Angeles, said in a statement.

The big banks failed to process applications for the taxpayer money on a first-come, first-served basis resulting in thousands of small businesses — 90% of applicants, according to the suits — with nothing. The $349 billion in funds for the Paycheck Protection Program, part of the $2 trillion Coronavirus Aid, Relief and Economic Security Act, ran out of funds less than 14 days after it was launched.

The Paycheck Protection funds begin as a loan, but the debt is forgiven if companies use the money to keep workers on the payroll and to pay rent and other approved expenses for about two months.

The latest $300 billion addition to the fund passed by the Senate on April 21, 2020, will also fall far short of the funds that are needed. It is predicted to last only two days and should be closer to $1 trillion to meet the demand. Hundreds of thousands of applications are already pending. The new law also does nothing to fix aspects of the program that allowed large companies to obtain tens of millions of dollars in loans and rules that encouraged banks to favor their existing customers.

The new bill also does not include any funds to replace income lost beyond the one-time payment of $1,200 and unemployment benefits in the previous bill. As a result of these and other shortcomings, legislators and the President are talking about the next coronavirus relief bill.   – KZ

With allegations that major banks shuffled Paycheck Protection Program applications to prioritize larger loan amounts and bigger businesses, Main Street businesses are furious. This possibility points to a clear design flaw in the program that tried to use the private lending market, already rife with discrimination and putting profits over all, as the mechanism for small business relief. Small businesses are demanding that any new funding must come directly to them via subsidies, not loans, and it must prioritize those who were left out.

Business owners of color are particularly vulnerable to discrimination in the lending system. A report from the Center for Responsible Lending shows that a large majority of minority owned businesses, including 95 percent of Black business owners, have little chance of receiving a PPP loan through a bank or credit union without existing relationships to 7(a) lenders. The priorities of large banks are being revealed, and this discrimination is playing out in real time.

Congress must act not only to expand access to the funds, but to dramatically restructure the program to include the small businesses moved aside as big chains and bigger businesses got first in line.