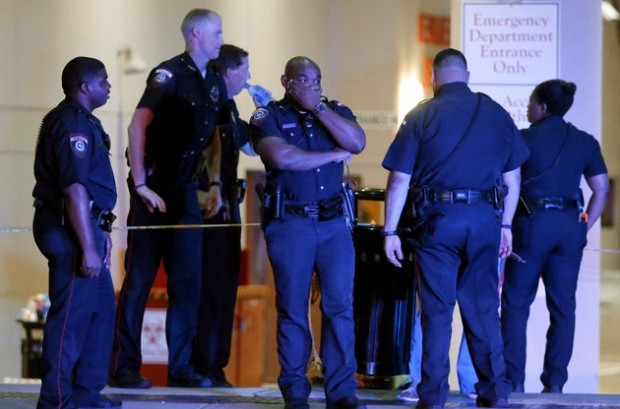 Above Photo: ASSOCIATED PRESS. The sniper attack in Dallas marks the deadliest day for police in the U.S. since the terrorist attacks on September 11, 2001.

Note: There were peaceful #BlackLivesMatters protests all over the United States in response to the recent police killings of African Americans. In Dallas a protest organized by the Next Generation Action Network (there is no Black Lives Matter group in Dallas), turned into something the organizers did not plan. Their leader, Dominique Alexander, had told people at a rally of 800 that they needed to take action, start to police the police.

He was at the head of the march, The Dallas Morning News reports:

He said police were five to 10 feet in front of him when the first shots rang out.

“A photographer was shot in the leg,” Alexander said. “I don’t think she was a professional because she didn’t have credentials, but she fell down screaming.”

As the crowd sprinted away from the scene, Alexander said Dallas Police sergeant charged in to assist the injured photographer.

There was a lot of confusion, this tweet tells the perspective of a participant who was near the front of the march. He describes a peaceful march and then shots from snipers. He thought the attack was on #BlackLivesMatter.

As the planned attack developed it became evident the targets were police officers. Eleven police officers were shot, five killed. One civilian was shot. Three suspects are in custody, one other died of a self-inflicted wound Update: Since this initial report of a self-inflicted wound the story has changed to the police sending in a robotic with an explosive that killed the alleged shooter].

Downtown Dallas was in lockdown early Friday, after snipers shot and killed five police officers “ambush-style” during a Black Lives Matter protest in the Texas city. At least seven other police officers and two civilians were also injured in the deadliest day for police in the U.S. since the terrorist attacks on Sept. 11, 2001. Dallas Police Chief David Brown said early Friday three suspects were in custody and police were still in negotiations with another suspect, who was being uncooperative and at times exchanging gunfire with officers in a parking garage. Local media reported that the suspect involved in the standoff later died. “He told negotiators that the end is coming, and he is going to hurt and kill more of us,” Brown said, noting the man had also claimed there were bombs around the structure. “We are being very careful in our tactics so that we don’t injure any of our officers in harm’s way.” Dallas Mayor Mike Rawlings added that downtown Dallas would still be considered “an active crime scene” going into Friday, and urged people to check the city’s news updates on which areas to avoid. The FAA also temporarily instituted a temporary flight restriction over the area.

President Barack Obama addressed the shootings from Warsaw, Poland, where he’d been attending a meeting with NATO officials. “There has been a vicious, despicable, and calculated attack on law enforcement,” he said. “I think I speak for every single American when I say that we are horrified.”

Police said earlier in the night that one suspect had been taken into custody following a shootout with Dallas SWAT officers, and the bomb squad was securing a “suspicious package” found near him. A “person of interest” whose photo DPD had initially circulated turned himself in, according to the department. All signs pointed to the demonstration having been peaceful throughout the evening. The DPD Twitter account included posts about “men, women, boys and girls” gathered in solidarity, while other photos show officers posing with marchers, including a state senator.

Dramatic video of the shooting shows dozens of officers converging on several buildings in downtown Dallas, including a parking garage. In another, several shotscan be heard ringing out as sirens blare in the background. Rev. Jeff Hood, an organizer of the rally, told the Dallas Morning News he was at the front of the protest with an officer before he heard “what sounded like six to eight shots.” “I saw people scramble,” Hood said. “The officer ran towards the shots, I ran away from the shots trying to get people off the streets, and I was grabbing myself to see if I was shot.”

Mayor Rawlings said it was “heartbreaking” to lose the police officers. “To say that our police officers put their lives on the line every day is no hyperbole, it is a reality,” he said at the press conference early Friday morning. “We as a city, we as a country, must come together, lock arms and heal the wounds that we all feel from time to time. Words matter. Leadership matters at this time.”

“They would step in harm’s way for each other,” Rawlings told CNN, speaking of the police officers. “The one man who was shot in the leg, he was so distressed, not for his wound but because he saw some of his squad go down around him.”

Texas Gov. Greg Abbott said in a statement his thoughts and prayers were with the victims. “In times like these we must remember ― and emphasize ― the importance of uniting as Americans,” he added.

Hundreds had gathered in cities across the country earlier Thursday to protest this week’s police shootings of Alton Sterling, who was killed outside a convenience store in Baton Rouge, Louisiana, and Philando Castile, who was shot during a traffic stop in Minnesota.

Demonstrators were carrying signs and chanting “no justice no peace” and “hands up, don’t shoot” ― common refrains of the Black Lives Matter movement against police brutality.