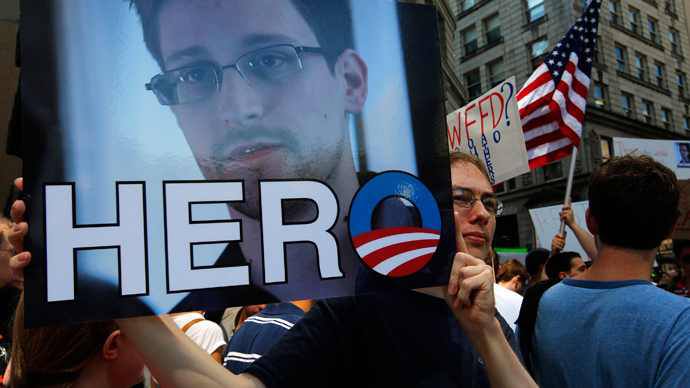 *STAFF NOTE: Email correspondence with Glenn Greenwald rebuts the claim in the article below that Snowden was forced by the Guardian to reveal his identity. Greenwald writes that Snowden “was insistent that he be identified from the start.” We will publish Greenwald’s article on this topic when it is available.

In the midst of its short summer, Moscow is balmy and relaxed.  Sidewalks brim with tables and merry customers, even traffic jams are less severe due to holiday season. The only danger for men is the girls’ dresses, they are precariously short.

In a few days, perhaps even tomorrow, the charms and  dangers of the city will be available to Edward Snowden, who is about to receive a refugee ID,  allowing him to roam freely the whole length and breadth of Russia and to socialise with its folk.

It will be a nice change from Sheremetyevo International Airport, where he was marooned for quite a while. The airport is vast; some unfortunates, mainly paperless refugees, live in its transit area for ten years or more. For a while, it was felt that our hero would remain stuck forever in limbo. The Russians and the intrepid Snowden sat on the fence, getting used to each other while keeping their distance. At long last, the ice was broken.  Snowden had gotten to meet with  representatives of the Russian public: a few members of Parliament (called Duma, in Russian), some human rights folks, leading lawyers.

He reminded them that he “had the capability without any warrant to search for, seize, and read your communications… [and] change people’s fates”. He invoked the US Constitution transgressed by the spooks, for the Constitution “forbids such systems of massive, pervasive surveillance”. He rightly rejected the legal ruse of Obama’s secret courts, for no secrecy can purify the impure. He recalled the Nuremberg ruling: “Individual citizens have the duty to violate domestic laws to prevent crimes against peace and humanity from occurring.” And this system of total surveillance is indeed  a crime against humanity, the cornerstone of the Iron Heel regime they plan to establish on the planet. When his declaration was interrupted by the airport’s routine announcements over the loudspeaker, he charmingly smiled and said “I’ve heard it so many times during the last week”.

The Russians loved him; the whole attitude to Snowden changed for better, as I expected when I called for this meeting on the pages of the leading Russian newspaper, the KP (Komsomolskaya Pravda). Now we’ve learned that the Russians have decided to issue him a refugee ID and grant him freedom of movement.

Why did they hesitate for so long?

Snowden is an American, and the Americans, like the British, are quite prejudiced against Russia, their common Cold War enemy. For them, it is the country of the Gulag and the KGB. Though both menaces vanished decades ago, traditions die hard, if at all. Even the Gulag and the KGB were only a modernised version of the Tsar, knout and serfdom horror of the 19th century, to be eventually superseded by the Brutal New Russian Mafia State as updated by Luke Harding. For an average American, the prospect of befriending Russia is nigh unto impossible. Even more so for an American who served in the CIA and NSA, as Snowden did. He felt that by embracing Russia he would lose his whistle-blower status and be regarded as an enemy agent, a totally different kettle of fish.

This was the case for Julian Assange, as well.  When it was proposed that the head of Wikileaks flee to Russia (it was technically possible), he procrastinated, dragged his feet and remained in England,  unable, in the end, to cross the great East/West divide.

Snowden was not seeking limelight, quite the opposite!  He wished to stop the crimes being committed by No Such Agency in the name of American people, no more, no less.  He hoped to become a new Deep Throat, whose identity would never be revealed.  His first profound revelations were made by correspondence; he flew to Hong Kong as he was familiar with the place, spoke fluent Chinese, and planned to return home to Hawaii. It appears  that the Guardian Newspaper pushed him into revealing his identity. Even then he thought himself safe, for Hong Kong is under Chinese sovereignty, and China is a mighty state, not an easy pushover.

The Chinese used Snowden’s revelations to defuse American accusations of electronic espionage, but they weren’t going to spoil relations with the US for his sake – the hot potato was tossed.  As a final courtesy they gave him 24 hours warning of his impending arrest. He had to flee, and he boarded the Aeroflot flight to Moscow in company of charming English lady, a Wikileaks executive Sarah Harrison.

Snowden landed in Moscow, but he never considered taking refuge in Russia. For him, this was just a transit point to a neutral country, be it Iceland or Venezuela, some part of the West. He planned to fly to Havana and change planes there for Caracas. He did not take into account the lengths to which the US Deep State would go to seize and punish him.

At first, the Americans put enormous pressure on Cuba to refuse transit for Snowden. They threatened Cuba with invasion and blockade, and Castro asked Snowden to look for another route. No airline but Aeroflot would fly Snowden out of Russia, and Aeroflot flies via Havana only. So the first plan got unstuck.

The gas summit in Moscow offered another opportunity for escape: the summit was attended by the presidents of Bolivia and Venezuela, both came with their private planes able to make the long flight. Bolivian president Evo Morales had left Moscow first; his plane was forced down and searched, setting a historical precedent. This served as a warning to the Venezuelan President Nicolas Maduro; he flew away from Moscow Snowden-less.

This was an important discovery for Ed Snowden: he learned by this experience that there is just one country on the planet that is outside of the US grasp. Just one country that is a real alternative to the Empire; the only country Navy Seals are not likely to raid nor Obama drones to bomb, the only country whose planes can’t be scrambled and searched. He understood that Moscow is the only safe place on the globe for an identified enemy of the Empire. Now he was ready to contact the Russians;  he resumed his temporary refuge request, which will probably be granted.

The Russians also hesitated. They were not keen on angering the US, they were aware that Snowden did not intend to come to them and just happened to get stuck in transit. He was a hot potato, and many people were convinced it’s better to follow the Chinese example and toss him.

The US Lobby pulled out all the stops trying to have him extradited. There were human rights activists and NGO members in the employ of the US State Department. Such people and organisations are promoted by the Americans, a Fifth Column of sorts. Lyudmila Alexeeva is a leading Russian activist of this kind; she was an anti-Soviet dissident, acquired US citizenship, came back to Russia and resumed her fight for human rights and against the Russian state. She is on record as saying that Snowden is a traitor to the service, neither a whistle-blower nor a human rights defender. He should be surrendered to the US, she averred. Other notorious dissidents and fighters against Putin’s regime agreed with her, unmasking their true colours.

Some siloviki were also against Snowden. These are members and ex-members of Russian intelligence community, who embraced the concept of convergence of security services and collaborated with the Americans and other services, notably the Israelis. They said that loyalty to one’s service is the most important virtue, and a traitor can’t be trusted. They pooh-poohed Snowden’s revelations saying they had known it all along. They said he is not worth quarrelling with Washington about. This  was also the line of Konstantin Remchukov, an important Russian media lord, the owner of Nezavisimaya Gazeta, who added that Snowden was a Chinese spy.

And finally there were conspiracy freaks, who said that Snowden is a Trojan Horse, sent to pry open Russian secrets. He was actually a CIA double agent, they said. No, he was an agent of Mossad, others argued. Return him to the US, they asserted. This bottom line has exposed many American agents, whether faux human rights defenders or equally falsesiloviki, security personnel.

Among supporters of Snowden in Russia, there was my friend, the poet Eduard Limonov, who called Snowden the harbinger of Unipolar World collapse. My newspaper KP supported the cause as well. The state-owned TV took a cautious approach, and was rather dismissive of Snowden’s discoveries.

President Putin, too, played a cautious game. Initially, he stopped talk of surrendering Snowden with a laconic statement: “Russia never ever extradites anybody to any state.” Then he offered Snowden refuge on condition that he would not act against the US. This is a usual condition for a political refuge. He added that probably Snowden would not accept it as he wants to continue his struggle “just like Professor Sakharov”, a renown dissident of Soviet days. He also tried to dissuade America from pursuing Snowden, comparing this pursuit with “shearing a piglet”, producing more screams than wool. This cautious game paid well: Snowden accepted his precondition and applied for temporary refuge until the road to Latin America opens up for him, while the President saved face and did his best to avoid quarrelling with the US and with the mighty pro-American lobby in Moscow. I should say that despite his autocratic macho image, Putin does not control free Russian media, which are usually owned by pro-Western media lords. His positions in the national discourse get limited exposure.

The Russian leader was not confrontational. He does not look for trouble, as a rule. He comes off as rather a cautious, prudent, conservative ruler. He would probably prefer that Snowden fly away, especially as Snowden, an American patriot, would not share his stolen crown jewels with the Russians. His granting permission for Snowden to meet with the Russian public was withheld for a long while. However, during this period, the US added many more names to the secret Magnitsky List of Russians whose properties and accounts were to be snatched (“frozen” is the technical term) by the US and its allies. Members of Congress freely vituperated against Putin and referred to Russia in abusive terms. Just wait — Obama will call Putin tonight and he will send Snowden packing, said the White House spokesman. Meanwhile, the US continued its build-up against Syria in the Middle East, and Israel bombed Syrian positions, presumably with American support. Instead of showing any consideration, Obama tried to bully Putin. This was the wrong tactic, and it backfired.

At the same time, Russia carried out a sudden check of its military preparedness, apparently keeping all options open. This great country is not looking for trouble, but it does not shrink from it either. Snowden is safe here in Moscow, where nobody can harm him, so he will be able to tell the world about the crimes against humanity committed by the American secret services. And Moscow is a great place to be, especially in summer.