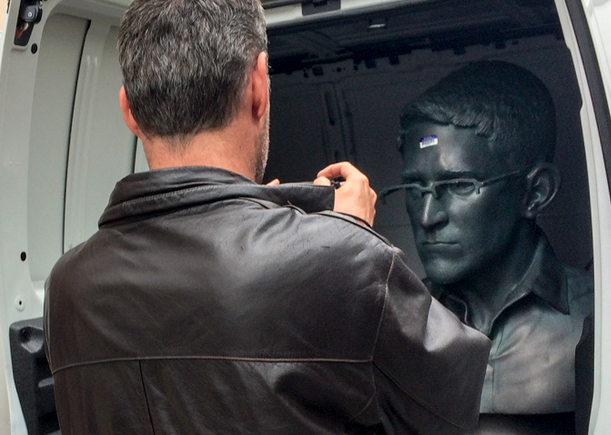 Snowden Statue Freed, Here’s A 3D File To Print Your Own

The Edward Snowden bust that was illegally affixed to a war monument in Fort Greene Park has been recovered from the NYPD. The statue, which sat on a column in the Prison Ship Martyrs Monument for just a few hours on April 6 before park officials took it down, had been in police custody for exactly one month.

“We are pleased that we could resolve this matter without litigation, and appreciate the City’s commitment to artistic expression, even though the artists failed to dot every ‘i’ and cross every ‘t’ when initially erecting their sculpture,” said Ronald L. Kuby, the civil rights lawyer representing the artists behind the sculpture. Kuby successfully argued that the artwork, while illegally placed,was not inherently contraband. The artists, who installed the piece at dawn, were fined $50 each for entering the park after hours.

Remarkably, the political artwork was in good condition. Upon the statue’s retrieval, the artists released the following statement to ANIMAL:

We are thrilled the statue has been released for public viewing. It belongs in public, since the aim of this piece is to help the public have an important national debate about mass surveillance.

The NYPD was gracious today in their handling of the situation. Some officers even expressed their approval of and appreciation for the art. It is exciting to be reminded that NYC is still a place where complex issues and challenging ideas can be examined by all in a public setting.

The Snowden bust will be temporarily placed in Brooklyn gallery the Boiler on May 8. After that, the artists hope it will find a home in a New York City park via the Arts in the Park initiative.

The political work was originally created to refocus dialogue around the NSA’s activities, and to portray Snowden — who now lives in exile in Russia — as an American hero. Glenn Greenwald, one of the journalists who worked with Snowden to expose the NSA’s massive global surveillance programs, told ANIMAL via email that “[Snowden’s] seen it and was really honored by it.”

In continuing the artists’ mission to increase awareness about Edward Snowden, they asked us to release a file, so anyone can 3D print their own statue. +++You can download it HERE!+++

(Photos/Images: Courtesy of the artists)