Above Photo: From scmp.com

The Immigration Department has asked to replace the lawyer for the seven asylum seekers who sheltered American whistle-blower Edward Snowden in 2013, accusing him of breaching the professional code of conduct and of having conflicting interests, as fears of detention among the refugees grow stronger.

Canadian barrister Robert Tibbo said that formal complaints were filed against him on July 13, and he was made aware of them late that Friday afternoon, just days before the seven asylum seekers – who had their protection claims rejected in May – attended their first hearing at the Torture Claims Appeal Board on Monday.

“It’s another desperate attempt to prevent me from providing legal services to my clients,” he claimed.

Tibbo said that the immigration director had previously tried to remove him from their cases. “They have systematically made efforts to remove me … They have come up with a myriad of excuses and allegations that were completely without any merit,” he added.

According to Tibbo, the Immigration Department filed a complaint with the Hong Kong Bar Association on July 13 accusing him of a possible breach of the bar’s code of conduct.

The department director also wrote to the Duty Lawyer Service, a government-supportedlegal assistance programme, on the same day requesting that the office consider the reassignment of a lawyer to the seven claimants.

The news comes as the seven asylum seekers are in greater fear of detention. They used to report regularly to the department’s branch office in Ma Tau Kok, Kowloon. However, this month they were told their cases had been transferred to Castle Peak Bay Immigration Centre in Tuen Mun, a facility for detainees awaiting repatriation or deportation.

Tibbo said the department accused him of having a conflict of interests and questioned his professional independence, given that he was the one who brought Snowden to the refugees’ homes back in 2013. The department also suggested he could be a witness in the claimants’ appeal case. 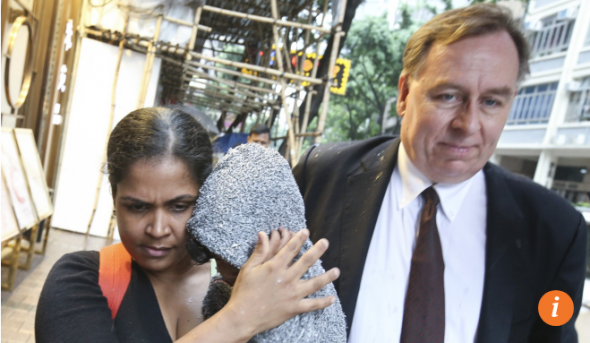 Snowden was at the time being hunted for one of the largest data leaks in history, which exposed the extent of electronic spying by the United States and other governments.

The group that housed the former CIA contractor when he hid in Hong Kong included four adults and three stateless children: Vanessa Mae Rodel from the Philippines, who has a daughter aged 5; Ajith Pushpakumara, a former soldier from Sri Lanka; and a family from the same country – Supun Thilina Kellapatha, his wife Nadeeka Dilrukshi Nonis and their two children.

Their initial claims referred to persecution and violence back in their home countries, but it was later added to their submissions to the Immigration Department that they have faced further risks after sheltering Snowden in the city.

Tibbo said the department also claimed he had been involved in providing information to the seven claimants about the presence of the Sri Lankan police in Hong Kong.

Reports emerged early this year that Sri Lankan police had been in Hong Kong looking for the refugees. Sri Lankan officials denied the reports.

“My job is to inform my clients. I simply provided advice on an urgent basis,” Tibbo said.

Asked about the complaints against Tibbo, a department spokeswoman said it had “a legitimate duty to maintain integrity” in the screening system and its appeal mechanism.

‘Help the refugees who saved me’: Snowden hits out at Hong Kong government in damning video

“Where necessary, the department will alert professional bodies (including the Hong Kong Bar Association) on individual matters of concern,” she said. “Any referral is made in the light of the duty said above. It is not and should not be seen as targeting specific individuals.”

She said claimants would not be removed from the city before their appeals were decided .

Spokesmen for the Duty Lawyer Service and the Hong Kong Bar Association said they could not comment on the specifics of this case.