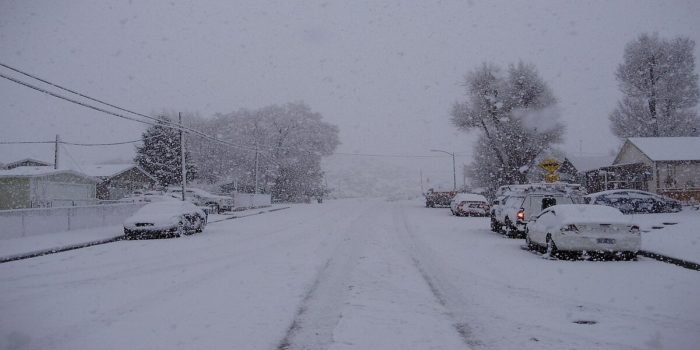 Snowstorm + Capitalism = Disaster For More Than 100,000 In Mississippi

Above photo: Famartin from Wikimedia Commons.

This week, Mississippi is experiencing unprecedented freezing conditions resulting from ice storms that blasted through the U.S. South. In addition to being unaccustomed to the freezing rain, ice, and snow, thousands of Mississippians suffering rolling blackouts and power outages, unheated homes and water shutoffs, have been left to fend for themselves.

Starting Feb 15, at least 250,000 Mississippians have lost power at some point during the week; counties in the southwest to east central Mississippi are primarily impacted. About 110,000 people were still without power on Feb. 19 in the morning. Almost all of the residents of the state’s capital city, Jackson, are without water. City officials have reported lacking the necessary chemicals to treat the water, and that the distribution system is overwhelmed.

Many of those impacted are trapped in their homes, unable to travel to replenish supplies, as most Mississippians do not have experience driving on ice-covered roads. As in other impacted states, in Mississippi too there are reports of buildings flooding from frozen water pipes bursting.

Working class people have been coming together to help each other while the state and federal governments neglect to use all the resources available to organize and implement an emergency response. In the absence of a satisfactory system, volunteers, faith-based non-profits and community organizations attempt to fill the need. Many Mississippians need water, food, and to be rehoused temporarily. In Mississippi, organizations like the People’s Advocacy Institute, Mississippi Poor People’s Campaign Black Youth Project and Immigrant Alliance for Justice and Equity have come together to assist people in need.

Taking personal risk by traveling on icy roads, volunteers are delivering needed supplies to those living in apartment complexes, although the task has proven to be difficult. These supplies include water, blankets, heaters, and hot food. The delivery of over 2,000 hot meals is being coordinated by the organizations engaging in mutual aid. However heroic and commendable the volunteer-based mutual aid efforts on the ground are, they fall short of being able to address the needs of hundreds of thousands of people in the state. Assistance and support from the government is crucial and missing.

Speaking with Liberation News, Calandra Davis, an organizer with Black Youth Project in Jackson, said, “We need for this [disaster] to not happen again. [The state] needs the infrastructure to ensure that we don’t need to turn the city’s water off to get through this. Even more so, [there is a need for] larger conversations around climate justice because a snowstorm of this nature didn’t come out of nowhere. Local officials need to take environmental justice seriously.”

Over the past two decades, the capitalism-fueled global climate crisis has increasingly given way to extreme weather events in the Gulf Coast. Despite being hit with storms, hurricanes, tornadoes, and extreme temperatures, states like Mississippi still have an inadequate and insubstantial emergency response system in place. The extent of the Mississippi Emergency Management Agency’s response to this week’s winter storm has been limited to distribution of water bottles using 14 disaster reservists, along with listing existing shelters and safe rooms on its website.

Currently, many stores and businesses have closed in the impacted areas. Stores that are open are also running out of supplies. The shutting down of businesses has meant lost wages for workers. Speaking to this point, Davis said, “There needs to be [government aid] right now so that people’s wages and livelihood are not affected by natural disasters, or state of emergencies.”

Power outages have been disproportionately reported in predominantly Black neighborhoods in Jackson city. Additionally, Mississippi’s homeless population is in a perilous situation. In cities like Biloxi, there are no existing shelters to house people during the winter storm. In the city of Jackson, Stewpot Community Services, a faith-based non-profit organization, provided shelter to 200 homeless people in hotels and shelters. About the homelessness crisis, Davis said, “[the government] needs to make sure [all] people are housed so that we are not rushing to get the unhoused off the streets during a winter storm.”

The Immigrant Alliance for Justice and Equity is another grassroots organization mobilizing relief aid in Mississippi. In the U.S. economy, immigrant and migrant workers are often essential workers who are forced to work low wage jobs. They have access to even fewer resources than others when affected by pandemics or weather disasters.

IAJE’s Executive Director, Lorena Quiroz said to Liberation News, “Discrimination based on class is very real and coming into play during this disaster. Migrants are disproportionately impacted by this racism and classism.” She added, “We don’t want any undocumented or low wage migrants to be left without help, especially since people are still out of work. We need to make sure people have heat and water.”

In addition to delivering necessities, the organization helped house 10 people in hotels today, while coordinating others to share housing. Quiroz reported assisting a family with a 9-day old baby to safety. IAJE is also searching for queer and transgender migrants to assist as their ability to access essential resources during this time has been identified to be worse.

In Mississippi, a patchwork of over 40 energy companies, the largest of which are privately owned, are involved in electricity provision to the state. A fortune 500 company and Mississippi’s largest electric power producer and distributer, Entergy, provides power to 450,000 Mississippians, about 50,000 of whom are currently out of power. Other providers like Southwest Mississippi EPA, South Pine electric, and Central EPA, combined have about 50,000 more customers that are currently experiencing power outage.

In 2020, Entergy increased its profits by $361 million, more than 50%, despite of the fact the pandemic year saw hundreds of thousands of working class families in Mississippi economically devastated. Like many corporate power companies across the country, Entergy has had a history of exploiting its customers. In 2008, Mississippi’s attorney general sued Entergy for overcharging customers by over $1 billion.

Across the country, working people owe up to $40 billion in debt to utility companies over the course of 2020. Thirty-two states passed utility shutoff moratoriums during the pandemic. Nationally nearly 35 million households benefitted from these protections until many of the moratoriums were allowed to expire. In 2020, Mississippi too had a utility shutoff moratorium that expired at the end of May, leaving people to choose between feeding families or paying for overpriced utilities, to avoid facing eviction. In September 2020, Mississippi allotted $9.2 million of federal grant money towards helping residents pay for electric and gas bills, but this amount is gravely insufficient given the state’s history of high utility costs.

Mississippi has the highest poverty rate among all the states in the country, but ranks in the top ten for highest monthly electricity bills. In 2019, Mississippi Power, the second largest private provider in the state, came under scrutiny when customers’ electricity bills during the summer months almost doubled in comparison to the billing cycle during the previous year, leaving people suspecting a connection between then newly installed digital meters and the outrageously high monthly bills ranging from $300 to $500.

In Mississippi and elsewhere, it is not the weather that has put the lives of so many at risk, but the decisions of millionaire executives and politicians to not invest in the appropriate infrastructure and energy sources. As in Mississippi, electric grids across country are unable to cope with extreme temperatures because they have not been updated or winterized, in this case. Water pipes can be insulated against freezing. An overreliance on fossil fuels for power production has not only worsened the environmental and climate crises but has created shortages. The U.S. government’s lack of seriousness in regulating fossil fuel use by corporations, and lack of investment in renewable energy technology, means disastrous consequences for the U.S. working class.

The unpreparedness of the utility giants, and the pathetic response of the capitalist government at the local and federal level, is nothing short of criminal neglect by those motivated solely by profit making. In contrast, a government of and by working class people would do everything in its power to avert a mass crisis such as this through preparation. That the U.S. Congress bailed out the oil and gas industry with billions of dollars of federal COVID-19 funds but has yet to act on providing material relief to the millions of working people impacted over the last week, and beyond during the pandemic, is a testament to who it truly serves. Only working class organization and mobilization against the capitalist system can turn this repugnant reality on its head.