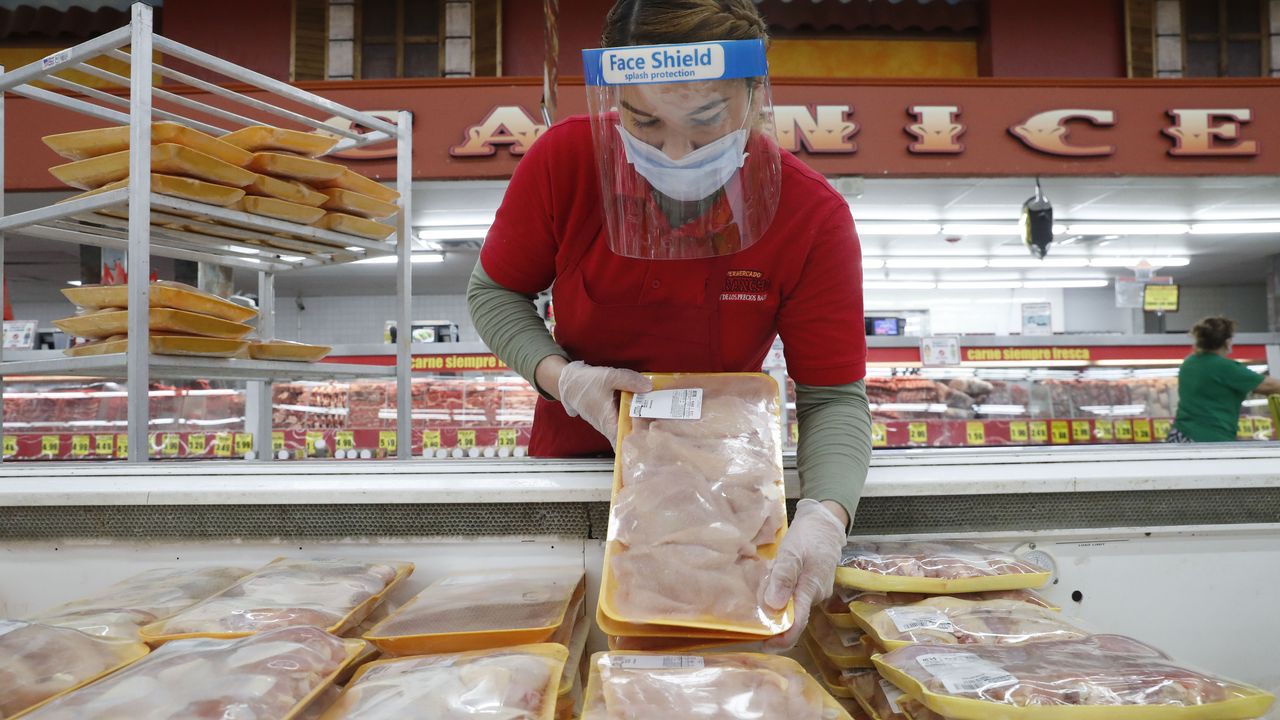 Soaring Prices Push US Households To The Edge

Above photo: In this April 29, 2020 file photo, a worker restocks chicken in the meat product section at a grocery store in Dallas. AP Photo/LM Otero.

Surging prices for necessities like used cars, phones, and housing have caused the biggest jump in “core” consumer prices in nearly four decades, according to new figures released Wednesday by the US Department of Labor (DOL).

Rising prices for food, heating oil, gas, and other necessities are eating into workers’ incomes both in the United States and internationally.

Workers are finding it increasingly impossible to make ends meet, even if they are employed full-time. The minimum wage in the United States remains at $7.25 per hour, and US President Joe Biden has reneged on his campaign promise to raise it.

Workers’ real average hourly earnings have plunged, falling 3.4 percent over the past year, according to the latest jobs report from the DOL, as companies used the pandemic as a pretext to slash wages over the past year.

Overall consumer prices increased 4.2 percent from a year earlier, the fastest pace since 2008, and significantly above economists’ expectations.

But “core” consumer prices, which exclude food and energy prices, rose 0.9 percent between April and March in the largest monthly increase since 1982.

The surge was extremely broad-based, driven by prices for used cars, air travel, housing, furniture and other consumer goods.

The biggest driver of rising overall consumer prices was rising costs for used cars, which increased by 10 percent over the past month and are up 18 percent for the year. The surge—the highest on record—is driven by the shutdown of auto assembly plants due to a shortage of raw materials, primarily microchips.

In April, the average price for a used car exceeded $25,000 for the first time in history, according to J.D. Power.

The CPI figures significantly underestimate the real price of housing, since they only take into account rent, not the price of owning or renovating a home. Over the past year, home values have shot up more than 10 percent nationwide, and in many of the zip codes, the increases are far higher.

The Wall Street Journal noted that “The median sales price for existing single-family homes was higher in the quarter compared with a year earlier for 182 of the 183 metro areas tracked by the National Association of Realtors, the group said Tuesday. In 89% of those metro areas, median prices rose by more than 10% from a year earlier.”

The increase in home values is affecting those least able to afford them. The value of homes priced under $100,000 have grown the most out of any price point over the past three years, according to an analysis by the Journal .

Lumber prices have more than doubled since the start of the year, making it impossible for many households to carry out much-needed repairs on their homes, and vastly increasing prices for new construction.

Prices are surging for nearly every commodity. The price of tin, essential to manufacturing electronics, shot up by 46 percent this year. Other raw materials, such as copper and steel used in electronics and appliances, are surging amid a mass speculation by large investors.

The run-up in food prices is driven by surging prices for staples like soybeans and corn, which have increased by more than 50 percent over the past year.

The Los Angeles Times noted that “last month, about 36% of small businesses surveyed by the National Federation of Independent Business indicated that they had raised selling prices, the highest share in 40 years.”

“Any animal that you eat is eating grains, and it’s eating corn, soybeans, or soybean meal, and perhaps even some wheat,” Sal Gilbertie, the CEO and president of Teucrium Funds, told Yahoo Finance Live. “We see the prices of these grains go as high as they’ve been literally since 2012, 2013,” he said.

Dana Peterson, the Conference Board chief economist, told Yahoo Finance Live, “While some of these price increases may fade with the pandemic, some may not.” He said the high grain prices will remain “at least a year, maybe two years.”

Periods of high inflation have previously corresponded with an intensification of the class struggle, with workers demanding higher pay to keep up with rising prices. The sensitivity of the US political establishment to these wage demands was expressed by the decision of the Democratic governor of Connecticut, Ned Lamont, to call up the National Guard to help suppress a strike by 3,400 nursing home workers set to begin Friday morning.