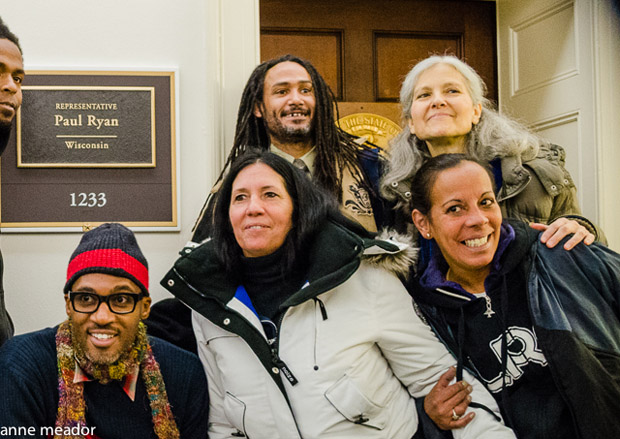 In spite of heavy, wet snow falling on Capitol Hill, a coalition of peace, anti-hunger, anti-poverty, environmental and community groups came together to voice its objections to what it calls “runaway, dangerous military spending.”

In a press conference in the Cannon Office Building, speakers called on the Congressional Budgetary Committee to pass a budget resolution that re-directs military spending to domestic needs that serve “people, peace and the planet.” They then presented their proposed budget and supporting petitions to staffers of  Rep. Paul Ryan (R-WI), Co-Chair of the Budgetary Committee.

After a stand-off on the budget resulting in a government shutdown in October, the Committee has until December 13 to re-negotiate some of the automatic sequestration cuts coming up next year. As it is, the Pentagon budget is due for about a 10% reduction, or $52 billion. Jill Stein of the Green Party’s Shadow Cabinet said that’s not nearly enough.

“We cannot both feed the hungry and feed our children, feed our elders, feed us and fill this absolutely bottomless pit of the military machine,” she said.

In its proposed “Peace-People-Planet” budget, the coalition outlines ten ways to slash military spending by 25 to 50%, including changing U.S. military policy (“stop policing the world”), ceasing to buy unnecessary weapons systems, and auditing wasteful practices at the Pentagon.

The coalition chose December 10, International Human Rights Day, to present its proposed budget because, Stein said, “It is about our right to participate in democratic governments. What we are trying to do is restore this promise of democracy that is essential for us to have a life which truly reflects our needs and peaceful aspirations.”

“Those of you out there who are hungry, we hear you,” Honkala continued. “One of every two Americans in now in poverty or low income. We’re not just hungry for food. We’re hungry for jobs, homes, for schools, for the basic necessities of life. We are hungry for justice!”

Fifty million Americans live with hunger. There were automatic cuts to the Supplemental Nutrition Assistance Program (SNAP) in November. The average recipient now receives less than $1.40 per meal. Democrats soon may appease conservative Republicans with even more reductions to food stamp benefits in a compromise farm bill.

Leslie Ortiz is a homeless mother of three whose food stamps benefits were reduced from $50 to $40 a month. She’s had significant health problems from surviving on cheap food lacking nutrition, including triple bypass surgery. She described a desperate struggle to feed her children.

“I may not eat, but I have to give little bowls of food for my three kids.” She sometimes feeds her children “water with sugar in it.” “We can’t make food the right way. Our brains don’t function. The prices have gone up. We don’t have the right food for all these kids,” she said.

“We  shouldn’t be wasting our tax dollars on Pentagon and military spending, but we should in fact invest in people,” said Mark Dunlea, Executive Director of Hunger Action Network of New York State. “We are hearing that Congress is going in the opposite direction, trying to restore the rather meager cuts in defense spending.”

“This is a government that spends a trillion dollars a year on a crime, a crime of war-making,” said David Swanson of Roots Action.  ”This is a choice that other nations don’t make, that have less money than we have and have better services and better lives than we have.”

In a speech at a defense forum, on the other hand, Defense Secretary Chuck Hagel called the automatic reductions to the Pentagon budget “too steep, too deep and too abrupt.”

“In effect, we would be gambling that we will not face a major contingency operation against a capable adversary in the near-term,“ Hagel said.

Stein pointed to the defeat of President Obama’s initiative to bomb Syria in September as proof. “We were told that resistance is futile, don’t try to stop it. And people just rose up and said “No way!’”