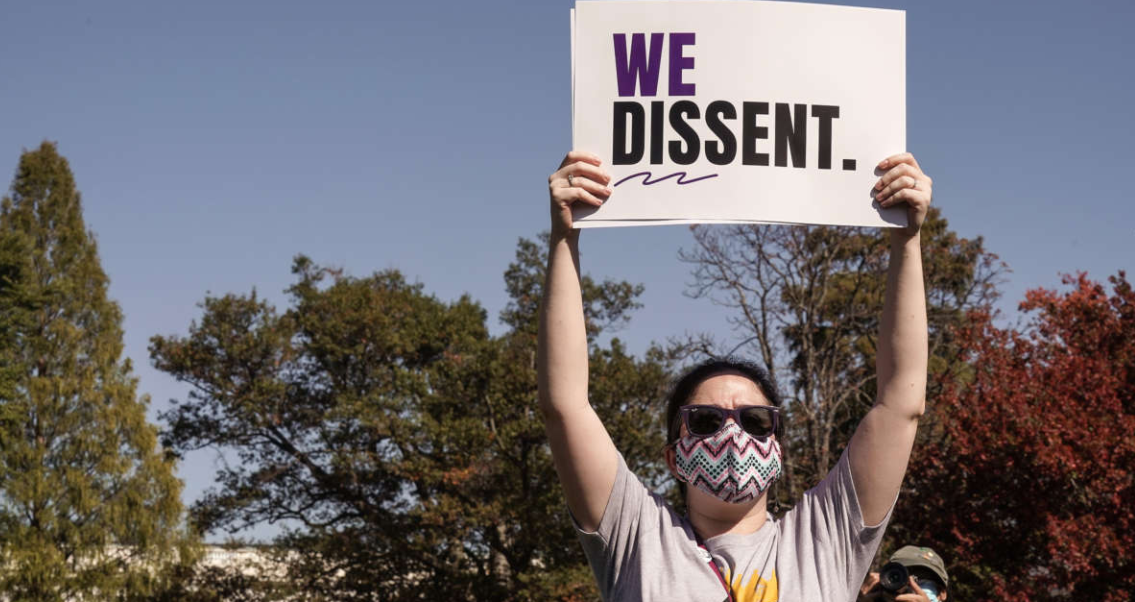 Social Movements Can Win Even With A Hostile Supreme Court

Above photo: A protestor holds up a sign during a protest calling for the Republican Senate to delay the confirmation of Supreme Court Justice Nominee Amy Coney Barrett at the U.S. Capitol on October 22, 2020 in Washington, D.C. Jemal Countess/Getty Images for Care in Action.

With the confirmation of Amy Coney Barrett, how will the Supreme Court decide future cases? Most people will probably think of it as a “6-3 Court” and expect decisions based on the number of justices nominated by each of the two ruling parties. Shelby County v. Holder, which struck down parts of the Voting Rights Act, was a perfect 5-4 split between the justices nominated by Democrats and Republicans at the time.

The justices, of course, disagree. They admit the nominations are political but the justice is not, “once that black robe goes on.” After all, it was Trump-nominated Justice Neil Gorsuch who wrote Bostock v. Clayton County, which guaranteed the Civil Rights Act’s anti-discrimination protections to gay and transgender workers.

Politicians generally respond to the question of how the Supreme Court decides cases with a convenient mix of both answers. The opposing party’s nominees are partisan hacks, but the rest of the justices (fine print: who we nominated) are faithfully applying the “written text” and/or “true values” of the Constitution!

All of these accounts, however, miss a key factor: social movements. We know that movements won our rights — from abortion to voting to joining a union — but they are forgotten when we talk about the Supreme Court. Politicians and the justices only admit to the influence of politics in terms of partisanship, not strikes and protests by ordinary people. The result is an incomplete and unbearable national conversation around the Supreme Court, which most recently played out in Barrett’s nomination hearing.

Introducing social movements to the conversation would not just make it bearable — it would make it exciting. The stories of why the Supreme Court upheld reproductive rights, civil rights protections and workers’ rights to organize are our stories. By telling them, we can prepare ourselves to continue those fights inside and outside the courtroom today.

The Fight Leading Up to Roe v. Wade

The women who fought for the right to choose — then and now — saw legal rulings as a potential part of their liberation, but not the whole ballgame. As one organizer put it, “the objective was not to change the law per se,” but to “use the process of changing the law, which would be a good thing to do, to further the goals of the women’s movement overall.”

In Connecticut, the movement used law as an organizing tool to fight severe criminalization of abortion — a woman committed a felony by even asking for one. In 1971, the organizers of “Women versus Connecticut” recruited as many women as possible as plaintiffs in a lawsuit, and in the process, they educated people about (and organized them around) reproductive freedom. These hundreds of women sued Connecticut and filed affidavits about their experiences with illegal abortions or being forced to carry a pregnancy to term. At a plaintiffs’ meeting, one of the lawyers (all of whom were women) argued that their lawsuit had to be about “flesh and blood people,” because “after listening to more and more judges, if we present it as a matter of law, they are going to think we are daft.”

The women won, as a federal court struck down the law criminalizing abortion. The decision recognized the “extraordinary ramifications for a woman” of pregnancy and childbirth, such as pressure to “curtail or end her employment or educational opportunities.”

The feminist movement had many other victories like this on the way to Roe v. Wade in 1973, using mass legal action, protests, and other creative tactics to shift consciousness and pressure politicians. In 1967, California’s Republican Gov. Ronald Reagan signed a state law decriminalizing abortion. By the early 1970s, over 20 states had passed similar or stronger legislation. The movement’s influence was so great that of the four justices appointed by Richard Nixon to the Supreme Court, one of them wrote Roe itself, and two of them joined the majority. Nixon and these justices preceded the growth of the right-wing legal movement we know today and were not necessarily anti-choice stalwarts. Nonetheless, this victory against the odds is a benchmark for us.

Today, giving non-answers about Roe is a sport for Republican nominees, just as asking futile questions about Roe seems to be one for Democratic senators. Both sides fixate on the legal correctness of landmark cases like Roe, but we need to unpack the stories of how they actually came to be.

The one question that no Supreme Court nominee can duck is about Brown v. Board of Education — “super-precedent,” as Barrett took to calling it. But the conversation stops there, without going on to who did the actual work of ending Jim Crow segregation. It was not the Supreme Court, which merely told the South to implement Brown with “all deliberate speed.” Martin Luther King Jr. described the Court’s impact as “stark tokenism.” The actual work was done by the Little Rock Nine, the Freedom Riders, Student Nonviolent Coordinating Committee, and Black protesters under siege by police and white supremacists all over the country.

The Supreme Court itself was often hostile to civil rights protesters. During the massive campaign in 1963 to desegregate Birmingham, Alabama, when cops and dogs and fire hoses were let loose, bureaucrats played their Jim Crow part by denying permits for civil rights marches. The marches went forward in defiance of an Alabama court injunction, and MLK and the other organizers were charged with jail time and fines. The Supreme Court upheld those charges. It faulted the organizers for “disobeying the injunction” and the permit process rather than “challeng[ing] it in the Alabama courts.” The Court’s advice to MLK was that “respect for judicial process is a small price to pay for the civilizing hand of law.”

Instead, the movement’s major victories were in Congress, with the Civil Rights and Voting Rights Acts. The Supreme Court, which upheld them as constitutional, played a more passive role. That’s not to discount the movement’s influence on the Court, which was nearly unanimous in acknowledging the need to “banish the blight of racial discrimination.”

Just as the feminist movement racked up state victories on the way to the Supreme Court, the civil rights movement went through Congress first. Even when the Supreme Court is hostile, social movements can uphold their victories through mass upheaval and by moving against the Court’s own institutional power.

That’s what happened during the Great Depression.

Workers Fight for — and SCOTUS Upholds — the Right to Organize

During Franklin D. Roosevelt’s first term (1933-1937), the Supreme Court routinely struck down his New Deal legislation for violating the freedom of contract and the Commerce Clause of the Constitution. The U.S. Congress could only tinker with “interstate commerce” — not economic activity within a single state, including large steel and auto manufacturing plants. But then, in 1937, the Court upheld the National Labor Relations Act (NLRA), which protected workers’ legal right to organize. What changed?

Employers defied the NLRA after it was passed in 1935, expecting it to be struck down. Indeed, every lower court which ruled on the NLRA said it could not constitutionally protect manufacturing workers because they did not participate in “interstate commerce.” The courts defied the clear popular mandate for the New Deal, expressed in FDR’s smashing reelection victory in 1936.

Rather than rely on the courts to protect their rights, rank-and-file workers took matters into their own hands. In a wave of successful “sit-down strikes,” they fought for union recognition and halted production in manufacturing plants by occupying them with massive numbers. In 1936 and 1937, nearly half a million workers participated in a sit-down. In one of the greatest labor conflicts in U.S. history, thousands of workers at the General Motors plants in Flint, Michigan, staged a sit-down strike beginning in December 1936. It ended in victory two months later.

Their primary demand was that GM obey the NLRA and recognize their union. GM at first refused to negotiate, condemning the workers for “striking at the very heart of the right of possession of private property” by occupying the plants.

The workers argued that the sit-down was necessary to defend their right to organize under the NLRA, refused to follow court injunctions that ignored this reality, and battled police who tried to evict them.

While FDR was publicly silent on the sit-down strategy, he lobbed his own controversial attack against the Supreme Court. He threatened to “pack the Court” through legislation allowing him to appoint more liberal justices who would uphold his policies.

Sit-down strike wave, popular mandate, court-packing threat — this was the context of April 1937, when the Supreme Court ruled on the NLRA. First, it upheld the NLRA as applied to interstate transportation and communication businesses — this was squarely within the Commerce Clause.

But second, it also upheld the NLRA as applied to manufacturing plants, even those within a single state. The Court was clear about how the strike wave factored into its decision:

“When industries organize themselves on a national scale, making their relation to interstate commerce the dominant factor in their activities, how can it be maintained that their industrial labor relations constitute a forbidden field into which Congress may not enter when it is necessary to protect interstate commerce from the paralyzing consequences of industrial war?”

Our Movements Can Win in Court

Our predecessors won these rights through social movements, and we need to adapt their approaches to the courts to our situation today. Shelby County and Bostock, which respectively weakened and strengthened the Voting Rights and Civil Rights Acts, echo our failures and successes in living up to the civil rights movement’s accomplishments. In other words, it’s not enough to grill Republican nominees about what they will do about Roe and abortion rights — we have to ask ourselves that same question.

Our movements generally have the right instincts when it comes to “legal” issues. When grand juries and courts are considering cases of police violence, we take to the streets. We dress up as handmaids to protest anti-choice judicial nominations. We stall the expansion of oil pipelines through civil disobedience as environmental lawsuits crawl through the courts. But as our movements grow and aim higher, these good instincts run up against conventional wisdom about the courts and their supposed impartiality. Rebutting that lie and staying on the course of mass action will require a deeper discussion — in the streets and our workplaces (and, of course, our homes) — about how our social movements can win in court today.

How can we defend Roe and win greater reproductive freedom? Do we follow the feminist movement and shift consciousness through state victories, and perhaps clinic defenses? How do we pressure the Supreme Court to abolish qualified immunity, which protects police from liability for civil rights violations? Do we go directly to the Court or through Congress first? In either case, mass upheaval and initiatives to reform or pack — if not abolish — the Supreme Court will be necessary.

Mukund Rathi is a radical lawyer and technologist. You can reach him on Twitter @heylockthatdoor.