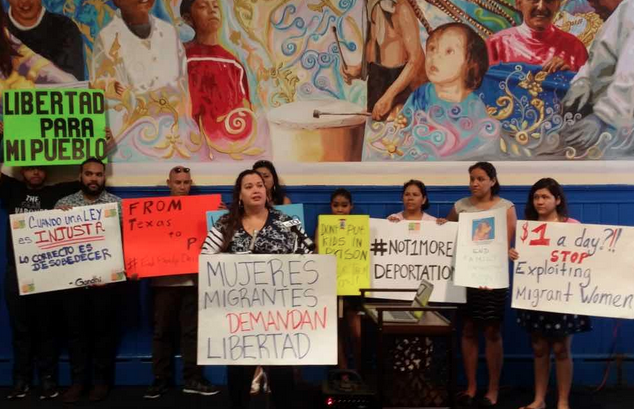 Women Had Protested Prison With A Hunger Strike Earlier This Year, Leaders Punished With Isolation

WASHINGTON – Olivia López thought she’d be working with migrant mothers and children in a group-home setting when hired as a social worker at a Texas family detention center.

But when she arrived at the concrete facility and the doors were unlocked to let her in, she was startled by the cacophony of cell doors clanging.

“I walked in and thought, ‘oh my Lord, this is really a prison,’” she said.

In an exclusive interview with McClatchy, López shared an inside perspective of troubling operations at the Karnes County Residential Center, which has been at the center of controversy over the Obama administration’s family detention policy. She described a facility where guards isolated mothers and children in medical units, nurses falsified medical reports, staff members were told to lie to federal officials and a psychologist acted as an informant for federal agents.

WHAT IS HAPPENING THERE IS TANTAMOUNT TO TORTURE.Oliva López, former social worker at Karnes County Residential Center

López’s story is a troubling counter narrative to the accounts given by federal officials and company representatives who describe the facility as a safe and comfortable place where mothers and children can stay during their asylum proceedings.

There is state-of-the-art medical equipment, yoga for the moms and soccer and video games for the children. But López said nothing changes the fact that the children were locked up and under the threat of being deported at any moment. She met a 3 year old who regressed to breastfeeding and a 5-year-old girl who was wearing diapers.

“It might look like they’re having fun playing soccer, but that’s certainly not the narrative of their lives,” she said. “They know where they’re at. They know they’re in a prison. They know they can’t leave.”

The Obama administration this month began to release hundreds of migrant mothers and children – some of whom had been locked up more than a year — under intense congressional and media scrutiny.

Geo officials did not address López’s specific charges, but said they “strongly refuted” the allegations. Spokesman Pablo Paez declined an interview request, but said in an email to McClatchy that the facility provides “high-quality care in a safe, clean and family-friendly environment.”

He noted the Karnes facility operates under the guidance of on-site ICE officials and cited a Homeland Security inspector general report that found no evidence of sexual abuse and harassment at the Karnes center.

“Since its activation, the Karnes County Residential Center has, under direction and guidance from ICE, created an open and transparent policy of allowing visits to the Center by the public, elected local and national officials, federal officials from ICE and other government agencies, as well as nongovernmental organizations,” he wrote.

While announcing the end of long-term detention, ICE officials emphasize that they will continue to place families at the facilities, which they describe as an “effective and humane alternative” and a way to keep families together as they go through immigration proceedings. Spokeswoman Nina Pruneda, while declining to answer specific questions, said in a statement that the facilities include medical care, play rooms, social workers, educational services and access to legal counsel.

“ICE takes very seriously the health, safety and welfare of those in our care,” she said. “The agency is committed to ensuring that individuals housed in our family residential centers receive timely and appropriate medical health care.”

But López’s account corroborates allegations made by many past and current detainees who reported threatening treatment and being placed in isolation for speaking out and separated from their children.

SINCE ITS ACTIVATION, THE KARNES COUNTY RESIDENTIAL CENTER HAS, UNDER DIRECTION AND GUIDANCE FROM ICE, CREATED AN OPEN AND TRANSPARENT POLICY OF ALLOWING VISITS TO THE CENTER BY THE PUBLIC, ELECTED LOCAL AND NATIONAL OFFICIALS, FEDERAL OFFICIALS FROM ICE AND OTHER GOVERNMENT AGENCIES, AS WELL AS NONGOVERNMENTAL ORGANIZATIONS.Pablo Paez, The Geo Group, which operates the detention center

When she was hired in October, López, 57, saw working at Karnes as a dream opportunity. She has been passionate about immigrant rights for decades.

She grew up with migrant workers near Modesto, Calif., where her father helped run an alfalfa and corn farm in the Central Valley. Her masters’ thesis looked at the living conditions of immigrants. Her dissertation for her Ph.D. focused on immigrant women and health.

She was not naive to the mothers’ immigration status. She knew many would be deported, but López felt she could make a positive difference by helping them with the transition either back home or into the United States.

It was not her expertise that company officials sought, she said. They hired her to help give the appearance of a well-supported medical unit, she said.

Several initiatives she launched were met with fierce opposition, she said, including establishing an open-door policy for detainees, sharing with them geographic information about where the facility was and improving documentation of the mothers’ care and concerns.

“Social work is different here,” she said she was told.

If a mother expressed a problem, the only thing she could write was that the detainee asked and was informed about how to access services.

The real goal, she soon learned, was a clean paper trail. The facility was often the subject of audits of various agencies and organizations. The company didn’t want any evidence that could draw more attention, she said.

“If a document is clean, there aren’t any follow-ups,” she said. “The audit stops at the document.”

But she did write down what she learned, albeit in a personal notebook. In a Dec. 22 entry in the yellow notebook, she wrote a directive from her boss regarding the government agency. “ICE: We don’t tell them anything.”

She said she once treated a mother whose 5-year-old daughter, a victim of sexual assault during the journey to the border, suffered from nightmares and refused to eat. López said the girl lost four pounds and started wearing a diaper. But when she reported the conditions to her boss, a psychologist, he discharged the girl with a note saying she was sleeping and eating better. When López later submitted a note that the girl had lost weight, another supervisor took the note and chart. She returned telling López that the girl had actually gained weight.

At a weekly staff meeting with ICE, the psychologist once told ICE agents that a group of women who had crossed together all had similar stories, which therefore must be fabricated, López said. The psychologist didn’t say the women’s names, but the agents said they could figure who the detainees were based on the dates they arrived.

“You just put a nail in their coffin,” López said she told him.

Advocates such as Mohammad Abdollahi, advocacy director with the Texas-based Refugee and Immigrant Center for Education and Legal Services, said López’s account proves what the mothers have been saying all along about poor conditions and being held in solitary confinement.

Earlier this year, dozens of the women at the Karnes facilitylaunched a hunger strike to protest conditions. Several of the leaders of the demonstration reported being placed in isolation in the medical unit with their children.

A deported teen mom who cut her wrist at the Karnes facility told McClatchy about how she was taken from her young son, put into isolation and then hidden at a hotel before being deported to Honduras.

“They just clearly do not have the capacity or the infrastructure to run such a facility,” Abdollahi said. “What this facility is, in reality, it’s an internment camp.”

During the strike, López remembers her supervisor announcing that the warden wanted the leaders placed in isolation. She said it was common practice.

They were often isolated with their children, but not always. If a mother was deemed a suicide risk, even under questionable circumstances, the children would be removed and placed in another room under the care of guards who, Lopez said, had no training or licenses as child care providers. The children could be separated from their mothers for up to four days with only brief opportunities to see each other on the last two.

Lopez sees the treatment as child abuse. She should have reported the company to Child Protective Services, she said. She didn’t report the allegations to ICE because, she said, they were involved in the mistreatment. On Tuesday, she will travel to Washington, D.C., to speak to House Democrats about her experience.

López said she quit in April because she could no longer work in a facility that asked her to withhold information from federal officials, punished residents who required medical treatment and required her to follow policies that she said were in violation of her license.

“What is happening there is tantamount to torture,” she said.