The Trump White House did one thing right in its shoddy report: Interest in socialism and Marxism around the world is increasing.

Since his inauguration, President Donald Trump has been fighting a nonstop battle against enemies both real and imagined—and his latest offensive is a real doozy.

“The Opportunity Costs of Socialism,” published on Tuesday by the White House’s Council of Economic Advisors, attempts to smear socialism—worker ownership of production—as a bankrupt ideology. The 72-page paper uses the 200th anniversary of socialist thinker Karl Marx’s birth as a jumping-off point for condemning everyone who doesn’t pray at the altar of the free market. Not even capitalist social democracies like Norway and Sweden are spared from blistering attacks.

The paper itself is nothing new. It’s a regurgitation of old narratives deployed against socialist projects, meant to convince workers in capitalist countries there is no meaningful alternative to their being exploited. It applies an academic veneer to arguments we’ve heard a million times before and cites historians and researchers with reputations as staunch anti-communists. In doing so, the document distorts socialism’s record and deliberately avoids painting a clear and complete picture.

Poor scholarship aside, the paper did get one thing right: All over the world, there is renewed interest in socialism and Marxism. Monumental achievements by countries which took up the mantle of socialism are becoming harder and harder to ignore, especially as conditions for ordinary people in capitalist nations continue to worsen.

The U.S. can no longer point to relative stability and prosperity within its borders to stem the tide, as wages there have stagnated since the 1970s and nearly all wealth created since the 2008 financial crisis has gone to a tiny minority of rich capitalists. When an overwhelming majority of the “new jobs” touted by Trump and his White House are temporary or seasonal and carry no benefits, it shouldn’t come as a surprise when an immiserated working class starts looking for other options. This rehashed assault on socialism shows Trump is far more afraid of worker power than the Democratic Party—his official opposition.

He’s right to feel that way. In the U.S. alone, previously minuscule socialist parties and organizations have seen massive increases in membership. Pushback against popular narratives about the legacy of socialism has grown exponentially since the 2008 crisis and the 2016 presidential election. More and more people are doing independent research about the validity of socialist systems, and many are finding they have been lied to for a very long time.

But as socialism’s popularity grows, so do the reactionary forces attempting to suppress this new wave of enthusiasm. This paper is likely only the beginning, as Trump continues to demonize countries he sees as rivals over problems his own policies have caused. We’re teetering dangerously close to a second Cold War, and if the world plunges into conflict yet again, there will be no doubt over who’s to blame.

But there is an alternative to war. As many of these new activists are discovering, and no matter what Trump would have us believe, there have been numerous triumphs across socialism’s still-brief history.

The Soviet Union rapidly recovered from two devastating wars, turning a semi-feudal agrarian society to a world industrial power in only a few decades. Cuba and North Korea have proven resilient to a seemingly endless period of siege, withstanding perpetual economic and military assault and retaining their independence. The embargo against Cuba—more akin to a blockade—has been in effect for 60 years, yet despite this and a period of hardship in the 1990s, the small island nation has worked miracles. Its healthcare sector is the envy of the world, providing free medical treatment and achieving incredible research breakthroughs like a vaccination for lung cancer. 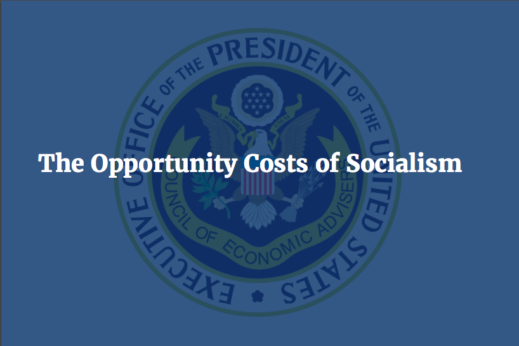 The White House released its anti-socialist “report” earlier this week.

Perhaps the biggest retorts to claims of socialism’s failure come from the People’s Republic of China. Similar to the Soviet Union, China has emerged from an impoverished feudal past, becoming the world’s second-largest economy in a short period of time. It has done so while maintaining its sovereignty and choosing its own path—a fatal mistake for others who flouted capitalist dogma, like Salvador Allende in Chile and Mohammed Mossadegh in Iran. By introducing certain market mechanisms while upholding state ownership of key industries, as well as sustaining the leadership of the Communist Party of China as the vanguard of the working class, China has been able to grow by leaps and bounds while expanding incomes and benefits for all its people.

A staggeringly successful poverty elimination drive is the centerpiece to this mission. Over the last 40 years, more than 800 million people have been lifted out of extreme poverty in China, a feat unmatched anywhere else in the world. The White House paper attempts to credit capitalism for this accomplishment but conveniently ignores the U.S. poverty rate has stayed more or less level since the 1960s. Capitalist countries keep a certain proportion of their populations poor and unemployed, both as an inevitable consequence of extracting profit and as a method of discipline for the working class. But in China, poverty and unemployment continue to drop, as eliminating these social ills is a top priority for the CPC. This would not be possible in a Western-style capitalist system.

It’s true some countries have prospered and developed under capitalism, like Japan and South Korea. But they still made use of heavy state intervention and had to strictly abide by U.S. and Europe’s rules. Japan, in particular, saw its rise in the 1980s cut short by interference from the West, as U.S. demands and marketization led to a calamitous asset bubble. After the end of the Soviet Union, the Russian Federation underwent a U.S.-guided capitalist transition that saw freefalling life expectancies and soaring unemployment. As these examples and many others show, following Washington’s lead has severe consequences.

China and other countries governed by communist parties stand alone in that they have been able to chart their own course and resist imperialist aggression. They have not been subject to the same stringent limitations which keep so much of the developing world languishing in poverty and debt, limitations following the same rules of profit extraction analyzed by Marx in Capital.