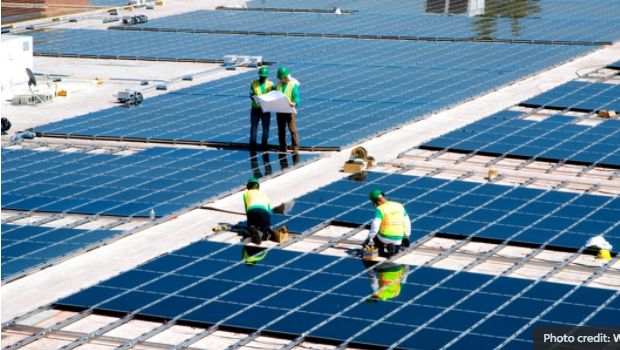 Above Photo: From Flicker

U.S. solar employs more workers than any other energy industry, including coal, oil and natural gas combined, according to the U.S. Department of Energy’s second annual U.S. Energy and Employment Report.

6.4 million Americans now work in the traditional energy and the energy efficiency sector, which added more than 300,000 net new jobs in 2016, or 14 percent of the nation’s job growth.

“This report verifies the dynamic role that our energy technologies and infrastructure play in a 21st century economy,” said DOE Senior Advisor on Industrial and Economic Policy David Foster. “Whether producing natural gas or solar power at increasingly lower prices or reducing our consumption of energy through smart grids and fuel efficient vehicles, energy innovation is proving itself as the important driver of economic growth in America, producing 14 percent of the new jobs in 2016.”

“Proportionally, solar employment accounts for the largest share of workers in the Electric Power Generation sector,” the report, released on Jan. 13, states. “This is largely due to the construction related to the significant buildout of new solar generation capacity.” Overall, the U.S. solar workforce increased 25 percent in 2016.

Wind generation is seeing growth in employment with a 32 percent increase since 2015. The wind industry provides the third largest share of Electric Power Generation employment with 102,000 workers at wind firms across the nation.

The reason behind this growth in the solar sector is due to the high capacity additions in both distributed and utility-scale photovoltaic solar, the report said. In fact, construction and installation projects represented the largest share of solar jobs, with almost four in ten workers doing this kind of work, followed by workers in solar wholesale trade, manufacturing and professional services.

In a sign of promise for the booming industry, solar employers reported that they expect to increase employment by 7 percent this year.

Solar is becoming the cheapest form of electricity production in the world, according to statistics from Bloomberg New Energy Finance. Last year was the first time that the renewable energy technology out-performed fossil fuels on a large scale.