Solar Is Saving Low-Income Households Money In Colorado. It Could Be A National Model

The state’s energy assistance programs are solving two challenges at once: help people save money on electricity bills while expanding renewable energy.

Low-income households in Colorado are getting a new question during visits from energy assistance agencies: Have you considered solar panels?

It’s an innovative approach to solving two challenges at once: reducing greenhouse gas emissions as the effects of climate change appear across the state, and lowering low-income families’ electricity bills.

The results can make a big difference for residents like Joe Anderson, whose power bills have been cut by two-thirds since 13 solar panels were installed free-of-charge on his ranch-style house under one Colorado program. “I felt like I kind of got the luck of the draw,” he said.

Colorado is emerging as a national model for how to expand renewable energy to low-income homes.

The state has been pursuing low-income solar programs since 2015, and it’s on track to have 20 megawatts installed by the end of 2019 as those programs ramp up. The total is the combination of several programs that, working with utilities and charitable organizations, provide rooftop installations and community solar arrays to help customers save money.

One key to Colorado’s success is that much of the rooftop solar work is being run by county and regional weatherization offices that already provide insulation and other energy efficiency services.

Solar Was ‘The Logical Next Step’

To see Colorado’s low-income solar programs in action, one of the best examples is in Arapahoe County, where Anderson lives, just outside Denver. It’s the third most populous county in the state and often a trend-setter in providing services.

Solar was “the logical next step in increasing potential energy-cost savings for low-income consumers” and a natural addition to the Arapahoe County Weatherization Division‘s work, said Steve Elliott, the division’s manager.

County employees identify which households would benefit the most from solar while doing a larger assessment of energy efficiency and other needs. Solar is an add-on for clients, on top of energy efficiency improvements. It’s used in about 15 percent of cases that are receiving services. 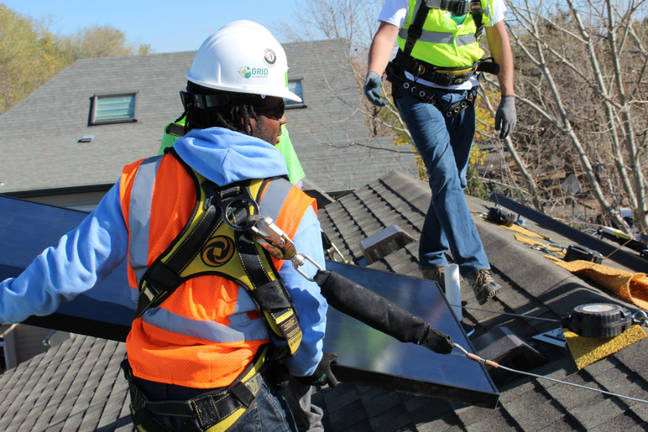 The Arapahoe office has installed 50 rooftop solar systems like Anderson’s in about a year of offering the service, and it projects an average annual electricity bill saving of about $550 per house, or 59 percent.

Anderson, who runs a small book publishing company and is a volunteer Christian minister, has four children and a household income of about $65,000, which fell just within the guidelines to qualify for subsidized rooftop solar.

Over the life of the solar panels, the savings are projected to exceed the costs—a requirement to be able to use government money. The rooftop systems typically cost $9,000 to $10,000. So far, only owner-occupied properties are eligible, but rental housing can apply for other programs.

“Our focus is to maximize energy savings for customers,” said Donna Garrett, administrative supervisor for the Arapahoe County Weatherization Division.

Some projects, such as Coyote Ridge Solar Farm in Fort Collins, are built to primarily serve low-income homes. The 2 megawatt project has been described as the largest low-income community solar array in the country. It’s the result of work by the local utility, Poudre Valley Rural Electric Association, and nonprofit groups such as GRID Alternatives, which installed the system.

In all, eight community solar projects have been developed through the program, with about 400 low-income subscribers. The typical electricity bill savings are 15 percent to 50 percent.

“I’ve always thought solar would be a good thing, but I can’t afford solar out here,” said Joan Murphy, 77, of Loveland, who signed up to receive power free of charge from the Fort Collins project. She raises goats on her rural property and prides herself on being thrifty.

“I don’t know if I agree with some of the greenhouse gas people or whatever, but I do believe that [solar power] is a good use of saving energy,” she said.

A dozen states and the District of Columbia have low-income solar programs, according to the Clean Energy States Alliance, which tracks renewable energy policies.

California is the country’s leader, with some of the oldest and largest programs for low-income solar.

Colorado, however, is emerging as a model because the state’s programs can be emulated just about everywhere, said Jeffrey Cook, co-author of a recent report about Colorado’s programs from the National Renewable Energy Laboratory, itself based in Colorado.

Every state has utilities that can serve as partners, as they do in Colorado, and most state and local governments already have offices that handle low-income weatherization, he said. 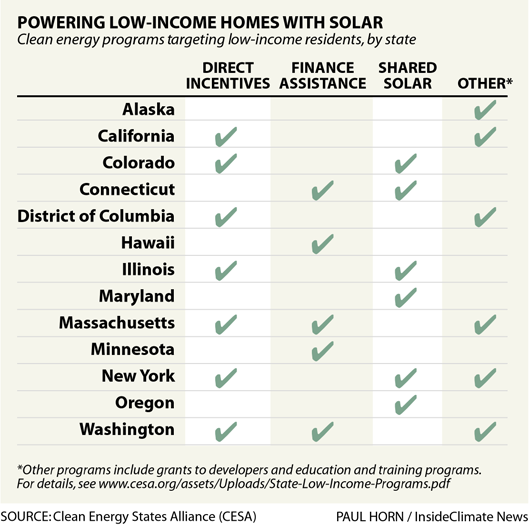 In Colorado, Xcel Energy provides 53 percent of the state’s electricity sales and has a 2 percent charge on customer bills that pays for renewable energy programs. The state also receives funding from two federal programs, the Weatherization Assistance Program and the Low Income Home Energy Assistance Program.

The different funding sources work together. For instance, the community solar program is running on a $1.2 million state grant to GRID Alternatives, and participating utilities such as Xcel are required to match the grant money on a 2-1 basis.

In addition to reducing energy costs for low-income residents, these programs are helping Colorado work toward its climate goals. The state has a target to reduce greenhouse gas emissions from the power sector 25 percent by 2025, and then 35 percent by 2030.

In many states, low-income solar remains in the idea stage for weatherization programs.

As with most of the energy economy, low-income assistance is going through rapid changes brought on by technology, and employees are working to adjust, said Dave Rinebolt, program manager of the Department of Energy’s Weatherization Assistance Program from 2016 to 2017 and a longtime director of weatherization programs in Ohio.

“It takes a while to integrate a new program into a delivery system,” he said. “People have to get training. Delivery systems have to get built. But over time, this is a great network of professionals, and they will get good at it.”

He thinks solar is a good option for some consumers, but that basic weatherization should be done first and is almost always going to be the most cost-effective. His view is in line with practices in Colorado.

The key point, he said, is that consumers’ needs far outstrip available resources.

Along those lines, Joseph Pereira, director of low-income services for the Colorado Energy Office, has gotten plenty of practice explaining how solar is a cost-effective way to help certain customers.

He is looking most closely at how best to serve the 11 percent of residents that the state defines as “energy impoverished,” meaning they spend 10 to 15 percent of their income on energy.

There also is a fairness issue. Low-income customers pay the Xcel renewable energy fee and get a disproportionately small share of direct financial benefit from the programs it finances, Pereira said.

“From an equity standpoint, it was really time to get some of that money moving in the low-income direction,” he said.

So that’s exactly what his office did, and he thinks other states can and should follow suit.