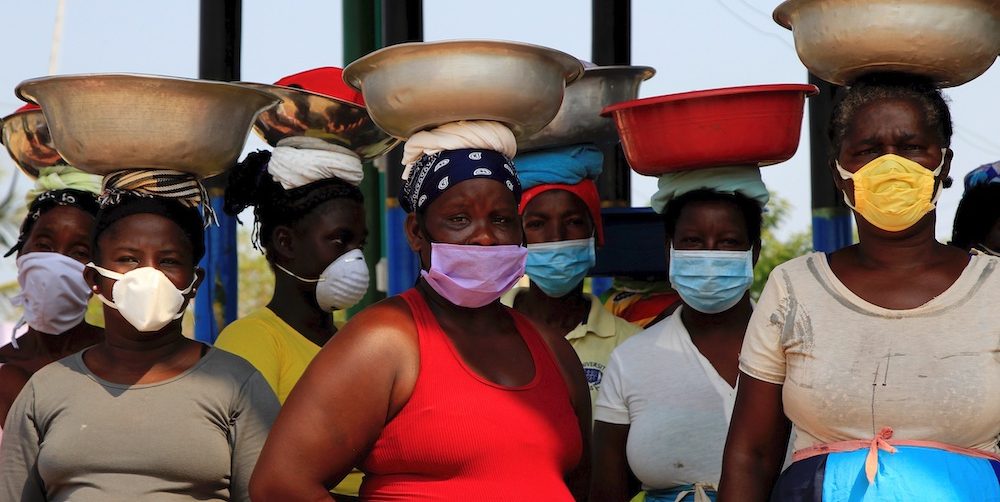 Above: Women of San Basilio de Palenque in Colombia pose with the baskets in which they would usually carry fruits and sweets to sell. By Ricardo Maldonado Rozo/EFE.

Realizing the vision embodied by human rights requires bolder measures and commitments to international solidarity than the world has so far witnessed.

The COVID-19 pandemic has left a massive amount of disease, death and despair in its stride, and will continue to seriously trouble the world even in its wake. As the result, it has posed a formidable threat to the enjoyment of human rights around the world. More specifically, as is widely recognized, the pandemic (and many of the measures taken to end it) have seriously threatened or harmed the enjoyment by billions of people across the world of the human rights to health, life, education, food, shelter, work, freedom of movement, liberty, and freedom of assembly. Less obvious to many is the fact that the pandemic (and the dominant responses to it) can also constitute serious harm to the enjoyment of the rights to development and democracy, and to freedom from discrimination and gender-based violence. Even more troubling is the fact that these dangers and impacts tend to be exacerbated in the Global South, and in relation to the poor and the racially marginalized everywhere.

The pandemic has also highlighted, rather vividly, the intensity in our time of our interconnectedness as human beings and societies, including the sheer depth of our mutual vulnerability, one to the other. It is now clear to us that a COVID-19 outbreak “over there” is also a COVID-19 problem “right here”. As Samantha Power has recently noted, this pandemic will not end for anyone until it ends for everyone. This reality firmly underlines the absolute necessity of expressing and ramping up our practice of international solidarity, among state and non-state actors alike, if the enjoyment of human rights across the world is to be optimized. There is simply no way of enjoying “our” human rights more fully “over here” whilst the human rights of the vast majority of the world’s peoples who live “over there” hangs in the balance (including their rights to development, health, education, food, shelter, and work). Not even the much richer societies of the Global North can enjoy these human rights optimally without the rights of their indigenous peoples, poor, and racially marginalized communities being respected to a far greater extent. We are all joined at each other’s human rights hip.

It is now clear to us that a COVID-19 outbreak “over there” is also a COVID-19 problem “right here”.

As such, if the world “after” this pandemic is to begin to look anything close to the vision of the good life embodied in the progressive human rights texts that have been proposed and/or agreed to for decades now, states and non-state actors must begin to take international solidarity much more seriously. States and non-state actors must pay far more heed to, and implement much more fully, the kind of international solidarity conceived in the Draft UN Declaration on Human Rights and International Solidarity. This entails the expression of a spirit of unity among individuals, peoples, states and international organizations, encompassing the union of interests, purposes and actions and the recognition of different needs and rights to achieve common goals.

“Post” the pandemic, taking international solidarity much more seriously in the struggle to optimally realize all human rights the world over will require much bolder measures than the world has so far witnessed. A few examples of such actionable measures include effective international cooperation to ensure free (or at least affordable) access for everyone in the world to any vaccines or treatments for COVID-19 no matter where in the world they were developed; and modifications, to the extent required, to national and international patent regimes to ensure such free (or at least affordable) access to COVID-19 vaccines and treatments.

Further, we require structural reforms in the global economy: ending the net outflows of finances and other resources from Global South to Global North countries so that the former can have more aggregate resources to realize the right to (sustainable) development of their peoples (e.g. by developing their health care and education systems and feeding their hungry); debt cancellation to poorer Global South countries (or at least the great expansion of the debt suspension regimes already in place) to help fund the anti-COVID-19 fight in those places, and ameliorate the economic downturns that are likely to hit most states after the pandemic – some more harshly than others, and similarly we should end (or at least suspend) the economic sanctions imposed on states by certain great powers. Financial grants and more favorable terms of trade must be afforded to the vast majority of Global South countries.

There is simply no way of enjoying “our” human rights more fully “over here” whilst the human rights of the vast majority of the world’s peoples who live “over there” hangs in the balance.

We also need to de-commodify healthcare and treat it instead as the basic human right that it is, including the setting up of schemes that offer universal access the world over to healthcare and medicines. Guaranteed income supplements should be paid to the most vulnerable people in both the Global North and South to stem the expected rise during and “after” the pandemic in mass unemployment, mass hunger, mass homelessness, and mass poverty.

States at the UN Human Rights Council and the General Assembly should adopt the Draft UN Declaration on Human Rights and International Solidarity. This would help to focus minds on the absolute necessity of practicing international solidarity in the struggle to realize human rights for everyone. It would also help provide a vital additional soft law resource for those who wage the relevant struggles.

Finally, states should adopt and ratify the Draft UN Binding Legal Instrument on the Right to Development, since an element of hard law is much needed to foster greater accountability and more firmly shape the behavior of states and other actors toward the realization of the right to development almost everywhere in the world. Without realizing the right to development much more fully, especially in the Global South—an accomplishment that would be impossible in the absence of greatly enhanced international solidarity—the global human rights situation “after” this pandemic would not become any better than it is today.

Obiora Chinedu Okafor is a professor at the Osgoode Hall Law School, York University, the UN Independent Expert on Human Rights and International Solidarity, and a former Chair of the UN Human Rights Council Advisory Committee.