Above: Activists gather in front of the Venezuelan embassy in Washington, DC in March, 2019.

We are writing to you from inside the Venezuelan embassy in Washington, DC where we are taking action against a US coup of the independent and sovereign Bolivarian Republican of Venezuela. The Embassy Protection Collective (Colectivos Por La Paz) is here with the permission of the Venezuelan government to show our solidarity with the Venezuelan people. The upcoming week will be a critical one, as we explain below.

The opposition, with its illegal, pretend government, say they will attempt to take over the embassy this week after the diplomats leave on Wednesday, as ordered by the US State Department. If they do, it will be a theft from the Venezuelan people who own the building. As we describe in some detail below, the opposition is acting in violation of the Venezuelan Constitution and the US is acting in violation of international law. 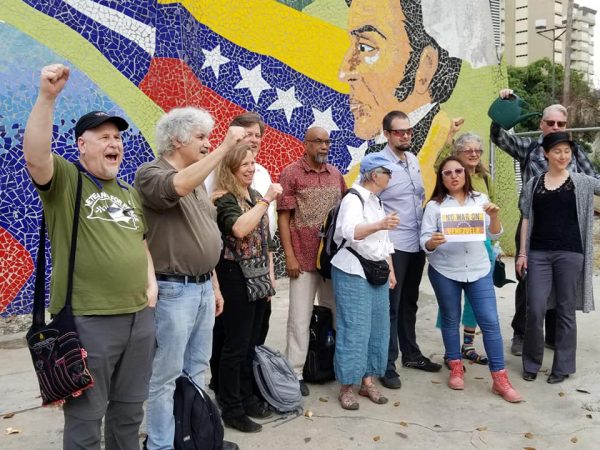 US and Canadian Peace Delegation organized by US Peace Council in Venezuela, 2019.

Guaido’s Power Shrinks, The Roots of Opposition are Based in Violence and US Coup Attempts

The opposition leader, Juan Guaido’s power is shrinking in Venezuela and he is often ignored. He has no transitional government, even Elliot Abrams admits he is not in power, and Guaido has been barred from running for office for financial improprieties after being investigated for illegally taking money from a foreign government. Guaido’s immunity from prosecution has been removed and he has been forbidden from leaving the country. He has announced major protests multiple times to support his takeover of the Venezuelan government on behalf of the US government, but the protests are often canceled or have small turnouts.

Mision Verdad, in “Guaido, A Laboratory Product That No Longer Works,” describes how the coup was designed in meetings in the Organization of American States (OAS) in December and January that included the convicted criminal, Leopoldo Lopez, and his protegé Juan Guaido by video link.

Lopez was convicted for his role in inciting fatal violent protests and road blockades in 2014 and 2017 that killed almost 200 people in an attempt to take over the government. He is currently under house arrest. While Lopez has tried to distance himself from the unpopular failed 2002 coup of Hugo Chavez, video and news from that time show he was one of the leaders of the Chavez coup. Lopez participated in the illegal detention of then-Minister of the Interior and Justice Ramón Rodríguez Chacín, as this video shows, as well as violent attacks against Caracas’ Cuban Embassy.

Chavez pardoned Lopez for his role in the coup in 2007, but Lopez was barred from holding political office from 2008 to 2014 for his misuse of public funds while mayor. Guarimba victims have pursued new charges against Leopoldo Lopez. Just two weeks ago, Lopez was implicated in a terrorist plot, funded by the United States and organized by Guaido’s chief of staff, where mercenaries from Central America, trained in Colombia, planned to attack infrastructure, government buildings, and assassinate political leaders, including President Maduro. 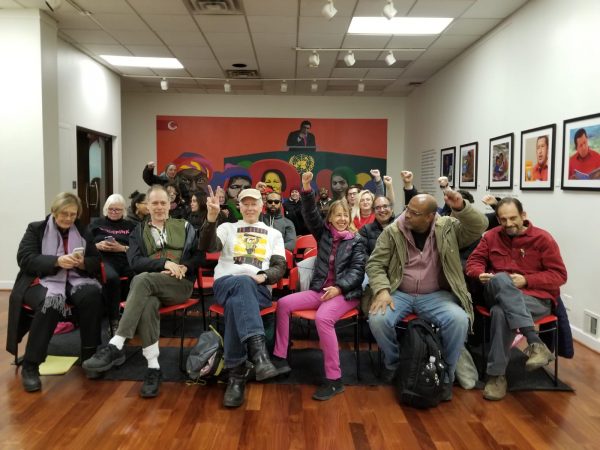 People gather at the Venezuelan embassy in Washington, DC to prevent takeover by the opposition..

Since then, people have been staying at the embassy 24/7. During the day, we work, and in the evenings, we hold public events. Yesterday, the ANSWER coalition held a national webinar and then we had an art build for people of all ages and light projection provided by the Backbone Campaign. See the list of events here. We are calling ourselves the Embassy Protection Collective and people in Venezuela are referring to us as Colectivos Por La Paz (Peace Collective).

We view the struggle to prevent the takeover of the embassy as fundamental to stopping this new phase of US imperialism in which the US attempts a coup and fails, but goes ahead and acts like it succeeded. President Maduro remains in power and is actively serving as the president. Juan Guaido has no power, yet the US is giving Venezuelan assets to him. It is truly Orweillian. If the US succeeds in this farce, then no country is safe. Where will the US turn next to appoint a president and give them power and assets? Nicaragua? Cuba? Iran?

You can be an Embassy Protector by doing any or all of the following:

1.Sign on in support of the Declaration of the Embassy Protection Collective.  Hundreds of people and organizations have already signed. Show your solidarity with Venezuela. The Declaration is reprinted below.

2.Spread the word through your communities by forwarding this on email, sharing content from our Facebook page and using the hashtag #ColectivosPorLaPaz.

3.Contact your member of Congress (202-224-3121) and demand they intervene to stop the State Department from giving the embassy to Guaido’s hateful, violent forces and to investigate the US-led coup and ongoing war on Venezuela. Let them know that US citizens are staying in the embassy to defend the rule of law.

4.Join us in person during the day, evening and night. We are particularly looking for people who can join us on Wednesday night April 24 and Thursday morning April 25 because that is the earliest that the opposition will try to seize the building. There are different roles to play and different levels of risk. We need people who can video, photograph, share on social media, call media, rally on the sidewalk (all very safe), sit in on the steps (you can leave before they announce they will arrest if you need to), block the front door (you can still likely leave without arrest) or join us inside the building where we will peacefully resist their trespass (highest risk of arrest). A number of us are committed to staying in the building to defend it.

We are building for the day we anticipate the Guaido forces will try to take over the embassy. If you are interested in being an Embassy Protector, please complete this form and we’ll be in touch. CLICK HERE TO SIGN UP.  The upcoming week of April 21, 2019 is a critical week. Come and join us.

Please let us know if you can join us on by writing info@PopularResistance.org. 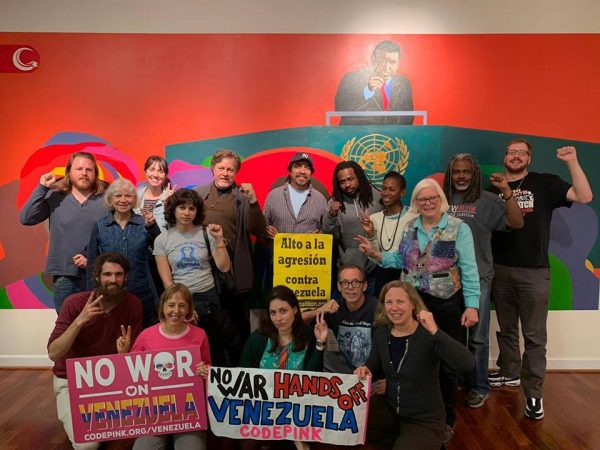 Sign on in support of the Declaration of the Embassy Protection Collective.

We have joined together as the Embassy Protection Collective to show solidarity with the people of Venezuela and their right to determine their elected government. We are staying in the Venezuelan embassy with the permission of the legitimate Venezuelan government under President Nicolas Maduro. We seek to provide a nonviolent barrier to the threatened opposition takeover of their embassy in Washington, DC by being a presence at the embassy every day of the week for 24 hours a day.

The Collective is working from the embassy, located in the heart of Georgetown in Washington, DC during the day and holding seminars and cultural events in the evenings, as well as sleeping in the embassy. Events include forums on Venezuela, its government, economy and the ongoing attempted coup. We are also holding seminars on US foreign policy toward Africa, Honduras and Iran, the prosecution of Julian Assange and other issues.

There is great cause for us to be concerned about a hostile takeover of the DC Embassy. On March 18, 2019, the Venezuelan opposition took over the military attaché building on 2409 California St in Washington DC, with the help of the DC Police and Secret Service. On that same day, the opposition also took over the Venezuelan Consulate in New York City. They have publicly threatened to take over the embassy itself.

According to Article 22 of the 1961 Vienna Conventions on Diplomatic Relations, foreign embassies should be protected by the United States government and their space should not be violated by the US government. Specifically, international law requires:

The Trump Administration is violating the Vienna Convention by not only allowing the illegal seizure of diplomatic premises but by facilitating it. The Election Protection Collective is supporting the people of Venezuela by taking responsibility to ensure that Article 22 of the Vienna Convention is followed.

The Elected Government of President Maduro Remains In Power

The government of President Nicolás Maduro was re-elected on May 20, 2018 in response to the opposition demanding an early election. The election was held consistent with the Venezuelan Constitution, in consultation with opposition parties and as determined by the National Electoral Council, an independent branch of the Venezuelan government.

The electoral process was observed by more than 150 election observers. This included 14 electoral commissions from eight countries among them the Council of Electoral Experts of Latin America; two technical electoral missions; and 18 journalists from different parts of the world, among others. , “the elections were very transparent and complied with international parameters and national legislation.”

In a letter to the European Union correcting some of the false statements made about the election, election observers wrote: “We were unanimous in concluding that the elections were conducted fairly, that the election conditions were not biased, that genuine irregularities were exceptionally few and of a very minor nature.”

Voting machines were audited before and immediately after the election. Venezuela does something no other country in the world does, of a random sample of 52 to 54% of voting machines. The Citizen’s Audit is observed by the media, the public, and all opposition parties, who sign the audits.

The opposition relies on Article 233 of the Constitution, which allows the National Assembly president to serve as interim president only if the president-elect has not yet been inaugurated. Guaidó’s self-appointment occurred after President Maduro had been inaugurated.

None of these conditions were met.

If Guaidó had met the above conditions, Article 233 allows him to serve for only 30 consecutive days pending election and inauguration of the new President. Guaidó’s self-appointment and fraudulent inauguration occurred more than 30 days ago and no election has been scheduled.

In a press briefing, Elliot Abrams, the US Special Representative for Venezuela, could not explain these violations of law by Guaidó and admitted that Guaidó is not “able to exercise the powers of the office because Maduro still is there.” Even Abrams admits that Guaidó is not the president. Therefore, he has no authority over the Venezuelan embassy.

The Role of the Embassy Protection Collective

The Embassy Protection Collective is made up of civilians, United States citizens, who are peacefully defending the embassy. If the opposition enters, they will be trespassing. We call on the DC police, Secret Service, Department of Homeland Security and any other law enforcement agency to uphold the law and prevent the opposition from trespassing.

Sign on in support of the Declaration of the Embassy Protection Collective.