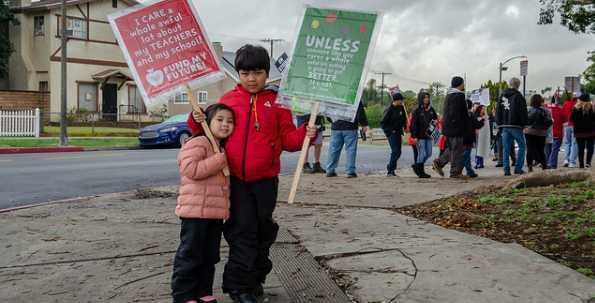 Some Early Lessons From The Los Angeles Teachers Strike

Corporate media absolutely won’t tell you this, but this year’s Los Angeles teachers strike is the latest chapter in the long running struggle against the privatization of public education in the US. With massive public support, 30,000 teachers have voted a settlement that increases their wages a little, brings back nurses, librarians and counselors to each and every one of the city’s 900 schools, caps class sizes and charter school expansion and more. Striking teachers managed to bring issues to the table that were supposed to be impossible to address, like the manipulation of school board real estate, school closings and charter policies to gentrify neighborhoods, among others.

The facts, which again corporate media has no interest in telling you, are that United Teachers Los Angeles (UTLA), following and improving on the model of the Chicago Teachers Union (CTU) leading up to their 2012 strike, raised its membership dues a couple years in advance to hire a research team and a cadre of community organizers. These cadre were charged with forging deep and permanent links between teachers and communities across the city in motion for better housing, against mass incarceration, for equitable transit and most especially with organized parents in every corner of the city who aimed to improve the schools. Childrens’ learning conditions after all, are the teachers working conditions. As in Chicago, these deep organizational and personal links with the organized masses provided them with a degree of immunity from the tsunami of lies coming from corporate media before, during and after the strike. UTLA spent extra money, extra staff time and extra care as well cultivating and educating its own members to support the new policies, to ensure every teacher was contacted repeatedly in the year and longer before the strike, provided with the facts and offered opportunities and chances to weigh in and to take ownership of their union at every level.

For a generation now, privatizing the public schools has been the bipartisan project of America’s one percenters. Democrats and Republicans, Donald Trump and Barack Obama and Mitt Romney, celebrities like John Legend and Magic Johnson, conservative and liberal engines of corporate philanthropy including the Gates, Walton, Broad, Heritage, McArthur and other foundations, Fox News and CNN, black and white big city mayors, hucksters like Al Sharpton and Roland Martin, the lords of Silicon Valley, Amazon, and Mark Zuckerberg, the hedge fund boyz, and a gaggle of thousands of big and small time crooks of all colors and descriptions are in on the hustle. Glen Ford explained several years ago how a handful of right wing foundations spent a cool billion or more in the 1990s trying to create an astroturf “movement” for privatizing schools, first through vouchers, then as charter schools, peddling the proposition that getting poor children out of public schools was civil rights movement of the coming new century.

The privatizers’ big breakthrough was the 2002 federal elementary and secondary public school funding act, the No Child Left Behind Act, which among much else, mandated excessive and biased testing and diverted education funding away from schools with low scores to charter schools and contractors of all kinds, giving birth overnight to a galaxy of unregulated profiteers. In the wake of Hurricane Katrina Louisiana authorities closed the entire New Orleans public school system firing thousands of teachers and all employees and went to an all charter system. In New York, Philly, Chicago and dozens of other cities without elected school boards local mayors and state governments closed and privatized thousands of public schools. In the places with elected school boards, laws were passed, even state constitutions amended to allow states to overrule and fire locally elected school boards who didn’t go along on the grounds those school boards were not were not fulfilling their duties. Conveniently the accrediting agencies were privately owned bodies staffed by the Gates, Walton Family, Broad and other pro-privatization foundations. That’s the way it was done in several Atlanta area counties, and hundreds more places besides.

The privatizers’ next and biggest break was the election of President Barack Obama, who elevated Arne Duncan, a hedge fund guy with no public school classroom or administrative experience before he undertook the savage decimation of public education in Chicago, to US Secretary of Education. In April 2009 Obama and Duncan announced their intention to close and privatize 5,000 so-called underperforming public schools, even though public education was supposed to be a local affair not a federal one. Obama utilized a one-time $4 billion dollar windfall appropriated to rebuild schools across the country, to fund Race To The Top, a federal program that awarded competitive grants (as in a race) to school districts based on how many teachers they could fire, how many public schools they could close and privatize. More than a hundred thousand qualified and experienced black teachers alone lost their jobs, among the many other casualties of Race to the Top.

Los Angeles had an elected school board, so the Broad Foundation and other charter school entrepreneurs funneled at least $12 million of outside money into school board election campaigns to get a pro-privatization majority, and to install Austin Butner, a guy with no teaching or school administrative experience before his swearing in as chief of the nation’s second largest school system. Butner championed the breakup of Los Angeles United School District into 32 “portfolios” of privately managed entities competing with each other on the free market. The relationship of these portfolios to parents and students would be one of customer service, and the relationship of the entities to teachers would be pretty much peons. Except that unlike teachers, peons and serfs were guaranteed housing and food, however miserable and could not be fired. All this too was left out of the corporate media coverage both inside Los Angeles and around the country.

Los Angeles is not West Virginia, or Oklahoma, or Arizona.

None of this came to pass overnight. Organized teachers in Los Angeles, like those in Chicago, saw the crisis coming years off, and began serious preparations more than two years before strike. That’s what is making the Los Angeles strike’s reach, influence and outcome very different from the relatively spontaneous teacher uprisings in West Virginia, Oklahoma, Arizona and perhaps those looming in Indiana, Virginia or Texas. The power to win, as Jane McAlevey asserts in her book No Shortcuts, is both inside and outside the school workplace. The pro-privatization forces are deeply entrenched, deeply organized and cannot successfully be opposed without deep organizing both in the workplace and in the communities served by the schools.

UTLA realized it was necessary to put forward a vision of caring, empowered and grassroots democratic community schools, in opposition to the pitiless marketplace of charter school competition. They call it the community school, not the charter school. UTLA was able, in the couple years preparation for the strike moment, in cooperation with its community allies, to envision, to develop, to enact and even to tweak elements of its community school model in a few places around the city. This is something impossible to do in spontaneous situations like the teachers strikes of West Virginia, Oklahoma or Arizona.

Without a deeply organized and empowered base inside and outside the school workplace, teachers and the public are vulnerable to corporate media tropes that the crisis is provoked exclusively by one party and the solution is mainly electoral – mainly confronting the Republicans and running for office as or doubling down on support for Democrats. During their strikes ten, twenty, thirty thousand and more teachers and parents mobbed their respective state legislatures, but the results they got were far less definitive, far less sustainable than what the meticulously planned actions of teachers in Chicago and Los Angeles achieved.

In Oklahoma, West Virginia and Arizona many activist parents and teachers emerged from the strike crisis with real and justified questions about the ability of their unions, the only organized and sustainable body with even the potential to reach across all the lines statewide, to lead a struggle to build just and democratic school communities in which teachers can teach, students can learn and communities can prosper. That’s what happens when unions don’t do their jobs, when they don’t undertake long term visioning and deep organizing both inside and outside their scholl workplaces. But contrast, teachers and school community activtists in Chicago and Los Angeles emerged from their strike crises with more of the confidence and resources to plan the next steps. That’s what deep organizing can an do, even in the face of the decades long assault upon public education from the forces of neoliberal capital, which aims to change all relations between people to those of the pitiless marketplace.

For Black Agenda Radio Commentaries, I’m Bruce Dixon. Find us as Black Agenda Radio, and Black Agenda Radio Commentaries on iTunes, Stitcher or wherever you find your podcasts. Most of our work is not audio however, it’s print. If you access the print version of this Black Agenda Radio Commentary for example you will find links to at least a dozen other pieces of our previous material, some audio and some print on the long struggle against the privatization of education, how it affects communities of color in particularly vicious fashion, and how the black and brown faces of politicians, celebrities and so-called journalists are utilized to sell it in black communities. Black Agenda Report, at www.blackagendareport.com has delivered news, commentary and analysis from the black left since October 2006. For the past three years, Google and other corporate social media including Twitter and Facebook have suppressed the appearance of our material in searches and subscriptions because anonymous cowards have accused us of being under hostile foreign influences.

So the only way you can be certain you’re getting fresh news, commentary and analysis from the black left each and every week is to visit www.blackagendareport.com and subscribe to our free weekly newsletter, which contains summaries of and links to all of our newly published material each week. That’s www.blackagendareport.com and hit the subscribe button to receive summaries to all the fresh news commentary and analysis Black Agenda Report provides each and every week direct to your email inbox for your reading, listening and sharing convenience. We urge you to forward the individual stories and items via your favorite social media platforms, be that Instagram, Facebook, Twitter or whatever, and to forward our email newsletter to your friends, colleagues and family and associates, that’s how the word gets out.