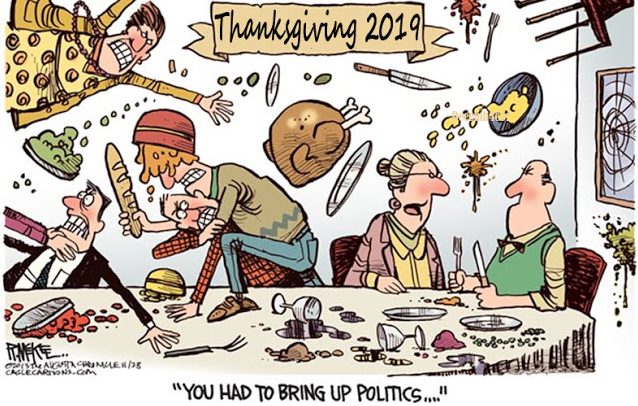 Some Suggestions For Discussion On Thanksgiving Day

Turkey with no talk? Please pass the muzzles…..

While cooking rice pudding this morning (for the first time ever) I was listening to NPR (National Petroleum Radio) and they were doing a segment on Thanksgiving dinner – how to avoid family conflict over politics.

They had on a couple ‘experts’ who suggested that families should avoid discussing controversial subjects like politics and religion.  One wag made the suggestion that when someone brings up an ‘uncomfortable’ subject the host should redirect the conversation like this, “Well Uncle Joe, tell us about your recent trip to Greece.”

America, the world’s supposed greatest democracy, is now afraid to discuss politics and the folks that guide the thinking of the nation (corporate-run media) have decided that in this land of the free (and home of the brave) that we should keep our traps shut and just discuss the mundane subjects like sports, shopping, crap TV shows and the like.

The US military is actively spreading ‘democracy’ around the world at the point of a gun wishing to show the great unwashed people of the planet just how it is all supposed to work.  Ugh!

It is my belief that people would be less divided in America if the corporate media actually reported the truth about what was going on with our government.  Take for example the recent coup d’etat in Bolivia that was clearly orchestrated by the CIA.  Some of us actually understand what happened there because we find other sources of media while the majority of Americans still fall for the propaganda that comes from the mainstream media.  So yes, this is one example of where conflict at the dinner table could arise.  But are we just supposed to fear telling our relatives and friends what actually happened in Bolivia?  According to NPR, the answer is absolutely YES.

One friend this morning sent around a link to a story about Extinction Rebellion’s global climate hunger strike and he commented, “Here is an excellent Thanksgiving story. Hunger strikers are missing Thanksgiving while Pelosi feasts. Let’s make it go viral so people are discussing it with their families on Thanksgiving.”

NPR would not approve of this! Only open your mouths to stuff food down your gullet!

Talk about the coming climate catastrophe?  No way. Forget about the kid’s future – no worries…

Talk about Joe Biden’s son being linked to $16.5 million of Ukrainian funds siphoned off into Hunter (and friends) pockets?  No, don’t do that – no need to upset anyone.

How about we talk about the growing wealth divide in the US (and around the world) as corporate oligarchs rob the people blind and we have record levels of homeless people this Thanksgiving? Sorry, not allowed!

Maybe we could all discuss our 800 military bases around the globe and the $6.4 trillion that has been wasted on endless war since 2001?  Just imagine how those funds could have been used for sustainable technology development, schools, health care and the like.  Nope, not allowed!

Just ask yourself, how we can have ‘democracy’ while we create a dumbed-down public that is afraid to talk about relevant issues that face us all?  It’s nonsense!

So ignore the NPR propaganda.  If someone wants to talk about politics at dinner please join in the discussion.  You don’t have to be rude or mean spirited – but you can listen, learn and share your heartfelt feelings about a particular issue that concerns you.  Someone, including each of us, might just learn something new.

That is how ‘democracy’ is supposed to work.

Bruce
PS My rice pudding turned out quite nicely.