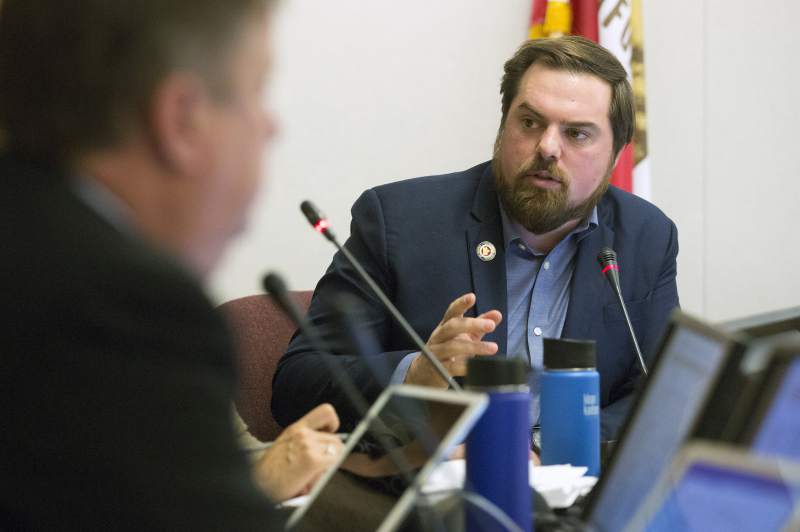 Above Photo: Councilmember Harvey asked about the ‘fear’ over manually controling such weeds as poison oak and star thistle. From Sonomanews.com

That’s because the Sonoma City Council on April 1 voted unanimously to ban the use on city property of the synthetic herbicide glyphosate – a main ingredient in such weed-killing products as Roundup – that is becoming increasing associated with suspected links to cancer.

The Council in December 2018 had already moved toward stricter limits on the herbicide, agreeing then to only consider its use as a “last resort” and directed city staff to return in 2019 with details on how much City of Sonoma maintenance crews spray so city officials could further mull an outright ban.

Sonoma Public Works Director Colleen Ferguson said at the Monday council meeting that city workers had used about one gallon of Roundup in 2018 and so far in 2019 hadn’t used any. She told the council, however, that glyphosate products were the most effective way to control quick-spreading and potentially hazardous plants such as poison oak, star thistle, blackberry and ivy.

She said a limited use of glyphosate on rare occasions would help public works clear away the most vexing of invasive plant species.

“I hear from the staff there’s poison oak growing along trails that the city and volunteers maintain, and sometimes it’s very hard to keep the areas safe for community members that are out enjoying (open space),” said Ferguson.

Councilmember Logan Harvey asked why glyphosate was so important in controlling such plants as poison oak and blackberry bushes. “What is the fear,” asked Harvey. ”Is there danger being created for public works staff… or just a more-work issue?”

“You’ve probably had poison oak before…” replied Ferguson, rhetorically, before going on to describe her own personal bouts of “itching and scratching and oozing” from exposure to Toxicodendron’s oils.

She said that a complete ban on glyphosate would mean Sonoma would have to get used to a lot more weeds.

With that, the Council voted 5-0 to ban glyphosate completely.

“Using one gallon of Roundup is 128 ounces too much,” said Councilmember David Cook about the most well-known glyphosate brand which for years has come under scrutiny as a suspected carcinogen.

Monsanto, the corporation that first developed the glyphosate compound in the 1970s, has long held that numerous studies have shown no link to cancer. Monsanto’s patent on glyphosate expired in 2000 and today it is used in about 1,000 various products on the market.

But the herbicide has come increasingly under the cancer-causing microscope since 2015, when the World Health Organization’s International Agency for Research on Cancer declared glyphosate a probable carcinogen.

In March, a San Francisco jury ruled that Roundup was a prominent factor in a California man’s cancer, after he’d used the spray for 26 years to kill poison oak and other weeds on his property. And in a separate ruling, the jury held Roundup manufacturing company Monsanto liable for $80 million in damages. It was the second such ruling, following an August verdict in another cancer case that found Monsanto liable for $289 million – later reduced to $78 million by the presiding judge. Bayer, which owns Monsanto, plans to appeal both verdicts.

Zukowski told the council during the public comment portion of the meeting that he was a cancer sufferer and, additionally, his “ex-partner died from cancer” and that his dog suffers from seizures.

“We need to set a precedent for the rest of the country,” said Zukowski. “I live here and I want to live here – unfortunately, it’s a poisoned county we live in.”

Resident David Eichar also supported the ban, saying he was concerned over the herbicide’s potential contamination of the public trails.

“I’m hiking up the Overlook Trail, I now have Roundup on my shoes,” summarized Eichar.

While all the council members acknowledged the added burden the ban would have on public works employees, they were all firm in their preference for a total ban.

Mayor Amy Harrington pointed out that similar municipal bans on synthetic herbicides are being enacted with increasing frequency – and that may be what pushes herbicide companies to develop safer, more effective weed control products.

“That’s what we have to do,” said Harrington, “because (glyphosate) makes everybody sick.”